Well, despite the unhappiness of a lot of folks in this thread, my experience is that the performance of today’s build is pretty much identical to that of the prior build in DX11. I haven’t done any DX12 tests yet. Still quite a bit worse than I was seeing in SU9, which is still disappointing, but no worse than the last build. I was really hoping we’d see some optimization to earn back whatever was taken away last time.

The performance is even worse than SU9 in DX11 and the problem is mainly due to the LOD of the terrain and the LOD of the object. doing tests in the same place and with the same graphic options I have lost approximately 10 fps with respect to how it was in SU9. The best version of the SU10 beta was the first one, which increased the performance significantly, but now in some places with a lot of traffic and objects, like N.Y or L.A, it is almost impossible.

Extreme low fps on any airport - even way out in the wild without much to render except landscape.

remember this is a direct A->B comparison - all (common) settings were left the same in the sim/windows/drivers/etc. - the only difference is the build of MSFS

Use of vsync makes GPU use artificially higher in the debug window. Ignore this is it not relevant in any case. This is about mainthread use.

Posted wrong zoomed images will correct when home from work.

You have a different renderscaling. In the second you have higher and that makes your gpu limit your cpu and creates less load on the cpu.

Much better if you turn off vsync when compare.

I’d posted wrong zoomed images and will correct later. But main images are identical resolution. However with a 3090 I can tell you I’m not limited in GPU (about 50% for these images) and so this would have no impact on what is a CPU usage test which shows how the mainthread is taking longer.

“Much better if you turn off vsync when compare.”
Vsync is essential to show mainthread use.

With VSync on your computer will never perform at its best. For a benchmark you should “unleash” you computer’s power by disabling it temporarily. With my rig I may be able to reach 300fps on some games (100% GPU usage / CPU usage,) but with VSync on it will always cap at 60fps, lowering the GPU and CPU usage proportionally.

This is not a benchmark test - it is an A-B comparison to show how mainthread use has increased between builds. 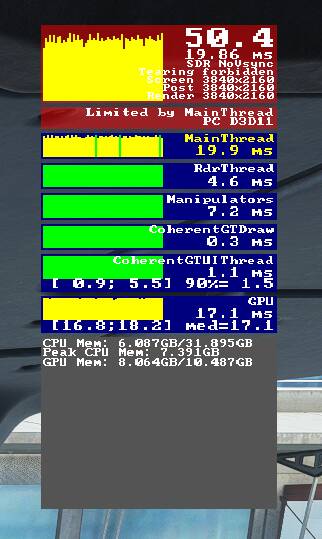 This was with DX12 in the first build, what happened? 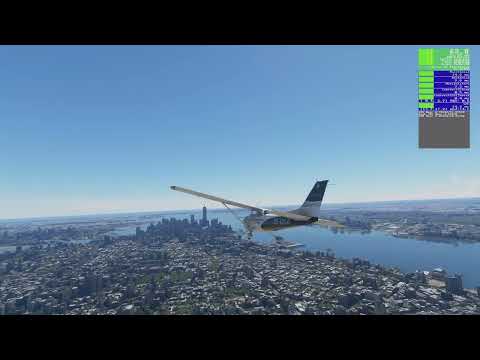 I’m seeing the same poor performance in DX12 although the last example I’ve given is using the DX11 API.

It will be really disappointing if this performance level remains in the released SU10 version and especially hard to live with knowing just how good the first SU10 beta was. That was the best performing version of the sim we’ve had since release and it only lasted about 10 days!

Here are the zoomed screen shots that I had edited out of my post above due to a cut and paste error!

But lowering TLOD makes no difference for me on main thread. I can increase it past where I’d previously had it since SU7 (125) up to about 200 in DX11, and 250 in DX12 on beta .13 without any impact on performance. Once I increase past those values, then I start seeing issues. But lowering it to minimu does nothing to alleviate main thread congestion or timings.

There’s definitely something going on under the hood that’s affecting us PC users that doesn’t seem to be an issue with Xbox who are seeing a noticeable increase in performance with this build.