Interesting. So consistently higher fps in DX11 both in SU9 and SU10 beta3. Is this what you expected to find? And - as you mention there’s far more microstutters with DX11 - would you prefer DX12 in its current state despite having overall lower fps?

Honestly, no. At least not as it is currently. The stuttering that occurs when new scenery is being loaded and during camera movement and fast turns is far worse than the microstutters.

I guess in some way this could make sense. That an unoptimized implementation of DX12 is worse than DX11. Let’s hope they’ll be able to customize the memory management.

The difference between SU9 and SU10B3, both in DX11, is even higher than I felt it was. A very impressive result, confirms my feeling although I never did such systematic investigations.

The difference between SU9 and SU10B3, both in DX11, is even higher than I felt it was. A very impressive result, confirms my feeling although I never did such systematic investigations

Thanks.
Yes that was my reaction as well :-/

Great work, you beat me to it. I was (still am) going to go the clean route and see.

Did a quick test similar to yours, did not clean out mods though but did still fly the stock C172. Turning traffic off made a HUGE difference in the overall frames.

The only major issue is the incredible frame loss around the 45 to 60 deg point when panning left for right. It literally goes from 70 to 28 until the panning stops then it jumps back up. Moving slower does not eliminate it but does reduce the severity.

All of this is using TrackIR to pan. Using the hat switch reduces the severity (slower) but again does not eliminate it so I don’t think it’s TrackIR related.

Just on a whim I decided to see what would happen if I created a 2nd window. I cannot confirm it but I swear having 2 full screen ‘screens’ open significantly reduces the issue on my system. Could the issue be tied to the multi-monitor feature added in 10?

Just a though and once again great test.

The only major issue is the incredible frame loss around the 45 to 60 deg point when panning left for right. It literally goes from 70 to 28 until the panning stops then it jumps back up. Moving slower does not eliminate it but does reduce the severity.

You don’t even need TrackIR for that. Happens in the normal camera views, or when panning with the mouse as well. Pretty irritating

Right, just edited my post as you replied. It is not a TrackIR thing, it is the sim.

On Xbox Series X, there has been a definite change. Flying over cities (especially if they are updated photogrammetry included in World Updates) was jittery and choppy before, but now is buttery smooth. However, I think they traded cloud rendering to achieve it. There is also a very unsettling ‘flashing’ across the higher resolution cities, enough that I had to stop flying over them.

In Japan the ground is detailed and no more jitters, but the clouds look like a cross between a cartoon and kleenex 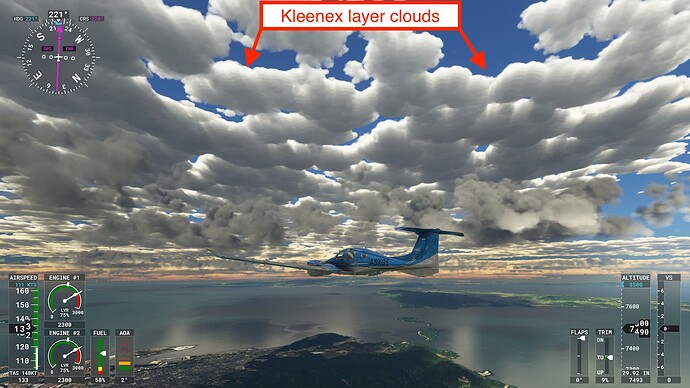 That’s odd. Never seen clouds looking like that before.

Never seen those either, but I don’t do discovery flights. Are those also present during regular flights?

Beta 3 - very good performance yesterday. Today its a stuttering mess with half the fps yesterday(30 to 15).
Edit - a full restart and Im good again…
Edit2 - no Im not…stutter and bad fps after taxing out.
Edit3 - DX11 seems good though. Something seriously wrong with the Vram management in DX12 it seems like. GPU Mem-line (“Display fps” option) was constantly red + bad drawcall times.

DX11 performance is same as SU09, and DX12 is a slide show, as it takes up complete VRAM.

I shifted to BETA with this version, so I don’t know how better was the first BETA. However, heard great things about it.

Hyper threading and p cores on/off minor difference vs. last release where these NEEDED to be turned off or 20 to 30 fps.

I found panning in cockpit extremely jerky yesterday it was fine prior to latest beta update running dx12, also found flight model behaviour in the 172 and tbm was behaving very strange. I don’t normally have any performance issues since disabling SMT but the whole software was running bad yesterday, sticking in control setting menus and just general laggy behaviour throughout the game.

Not seeing any performance improvement, nor they mentioned any in the release notes.

+1 mate and smth is wrong with PMDG 737 and panning camera views also zoom in - zoom out.

I have the exact same setup like yours and the same problems. Especially stutters when panning.