Sim Update 10 BETA Sim Update 10 Surveys
OlieTsubasa443 August 4, 2022, 2:52pm #1
If you are using a VR device, did you notice any significant issue ? Is the performance better or worse than before?

Please provide additional information in the comment section below

For any bug report, use the Virtual Reality (VR) section

unplayable with quest 2 in vr, Crash to desktop, airlink and virtual desktop.

This SU10 Beta 3 is a clear regression in VR. While frames are around the same (capped at 30 in NCP), there are more stutters and the fluidity from the first patch is gone. Tried with DLSS quality and TAA - DLSS is even more prone to stutters than TAA. How come?
3080ti/12900F

Completely unplayable in VR, I Want To Downgrade. i7 12700kf, RTX 3070, 32gb of RAM, game is installed on a SSD. Playing in a Quest 1 via Virtual Desktop. There was no difference in performance no matter which settings I changed. Performance was worse with 3rd party planes than with Asobo ones, and though that was the case before to be fair, performance is worse by the same proportion between the two in this build (read: Much Worse in both cases). I entirely emptied my community folder, there was no improvement. There was no difference between TAA & DLSS, no difference between DX11 & DX12 at all in fact (possibly it was even better in DX12). My last-ditch effort to lower TAA resolution scale to 30% and disable SteamVR supersampling entirely did nothing at all to improve performance. The previous Beta build ran beautifully. I cannot emphasize enough how much better the game performed than SU9 in VR with the earlier Beta build. I had a long day at work, and I feel like there is nothing I can do to squeeze that silky smooth performance I had come to expect before from this nightmare build. Guess I’ll kill a few beers tonight instead.

My VR is working with Quest 2 via usb cable, in a 3080 laptop. Seems about the same performance wise which is pretty good… but DX12 might be working for me now finally (using Oculus runtime), as it hasn’t had that misscaled and misplaced texture problem (yet). Too many other variables impacting potential performance to know more… will keep at it over the weekend

I remember when MSFS was first installed , it looked very nice and ran very nice on medium-high settings in VR HPreverbG2, with a i7 7th gen and a 1080ti it looked great and ran smooth . Now 1+ years later I upgraded to new pc with win 11, 3080 TUF, i7 12700, DDR6 32Gig ram and it runs on medium at best and looks average and inconsistent. Hope it goes back to the quality and performance it once had + some , spend $1000’s for improvements in a game , it should be improving not going backwards imho.
Cheers. P.S. At the start no VR tools etc to run it just default , Now you need run this tool that tool this setting that setting DLSS, TAA , just to get it useable .

DX11 performance is the same however DX12 is running smooth and stutter free now. Using OpenXR resolution of 100%, I’m now able to up my TAA game setting to 90% (previously ran at 75%) and maintain a stutter-free experience. This resolution increase has greatly improved the clarity of the sim. It’s awesome right now. 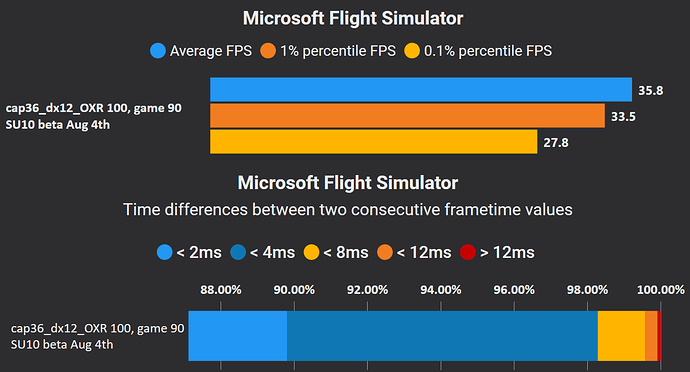 So far I was flying Live weather in CAVOK aera since the last beta (World Tour C310 and PMDG737) Today running the last update beta, it was very overcast and my perfs did go down so badly, almost 20FPS, a loss of 15 fps included many stutters which wasn’t the case at all with SU10 beta!) it was unflyable in approach!

I have to test turning DX12 off to check it out

Yes and discovered its only at the main menu

I am getting lower FPS using DX12 with VR in this version but less GPU load which leads to no lag and smoother experience. I guess i will be using DX12 from now on. Because Quest 2 under heavy load, gets frustrating lag every 15 mins or so and when i alt tab to change focus it is back to higher fps again. I tried DX12 and don’t have this issue with it!

Seeing the same with Reverb G2. CTD when entering VR at the main menu. OK if I start flight before entering VR.

DX12 worse in VR for me now. Probably cause of the memory management.

DX11 not much difference than before. Only interestingly, DLSS in quality setting is now worse than TAA with 100% scaling, was able to get up to 120% scaling to get similar results as with DLSS quality. Also, the glass cockpit numbers are still smeary with DLSS.

My performance has been really good.

However, I sometimes get a bad VR session start with low frame rate. Going back to desktop and then VR again fixes it. Nothing else changes except going to desktop and back to VR.

Once the VR session gets a good start it stays consistent.

Have you tried DX12 VR? I had exactly the same problem but with Quest 2. Focusing another window or desktop fixes the dropped FPS issue but since i use DX12 it seems to be resolved now.

Did some further testing/tweaking today: DX11 & DLSS on Balanced, SteamVR supersampling at 150% yields acceptable results (read: Playable, but Still Worse Than Before). Performance with this arrangement is maybe around the same as SU9, image quality is the same or worse. Certainly this is not the performance boost that Asobo is touting it as, and nowhere near the results from Beta 2, which ran smooth as butter in DX12. Hope they can fix this before release.

Quite pleased with 1.27.13.0 performance so far. It’s weird to read about so different an experience between lots of PC beta users, but can only say what I see. Haven’t really measured it a lot (just play in VR), but flew for hours in the 737, DC-6 and wee 152 in lots of different types of flights. All nice and smooth. 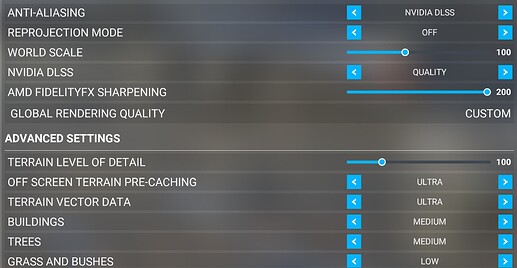 Multiplayer off, every other data on (weather, traffic etc).

DLSS is a bit of a ‘Cataracts Simulator 2022’ but the FX sharpening at 200 (!) seems to help. Probably clear with TAA and DX11, but DX12 is just feeling smoother I think.

My evaluation of better or worse is straight forward. Is it possible to fly the maverick riffle lake mission without loosing (the perception of) any frame in VR and to reproduce my top 50 score ?

Why this methodology ? Because the first time these mission were released, it was unflyable. I had to wait a new update and change completly my flightsim graphical setting to get it work.

I first start with the parameter as they were before. Compare by flying and then try to find the better possible settings.

With this last release it’s not playable anymore. Obviously it works, but I got frozen multiple times during the fly. Always at a critical moment, when a lot of trees must be displayed or if you are as close as 1 or 2 ft from the ground …
To have it a bit playable, I had to change the DLSS from performance to ultra performance.

I know and understand what’s behind. But please guy, don’t loose the focus, split PCs and XBOX code and use the ressource of our systems in an optimal way.

I love and play FlightSim since the begining, first one on a Sinclair Spectrum in 1984 or 85. Could you imagine the amount of version I’ve been through ? Guess what, on every version, the performance has been an issue. We spend more time in tuning than flying.