Just tried the 747. After some minutes engaged the autopilot. Climb change to 10.000feet and speed 250. Suddenly the aircraft start climbing with 5000-6000 feet per minute, then it goes back to 2000 , but then the speed goes (ofcourse) suddenly up to 280 knots, then it starts climbing back again with 5000 feet p/m but a few seconds later it starts climbing again with 6000-7000 feet a minute !!! This is definitely not correct… The AP is screwed up if you ask me.

The 787 has similar issues, the vertical navigation is unreliable. I mostly use the VS mode and need to cycle the auto throttles to get a decent profile out of it.

Yes, I have the same problem. It’s not even capable of holding the altitude. It just keeps running the trim from full nose up and full nose down, and overshooting and undershooting the altitude, and so on. ATC is not happy about that: 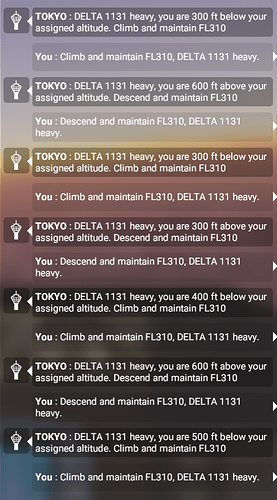 And this is how it looks from the cockpit: 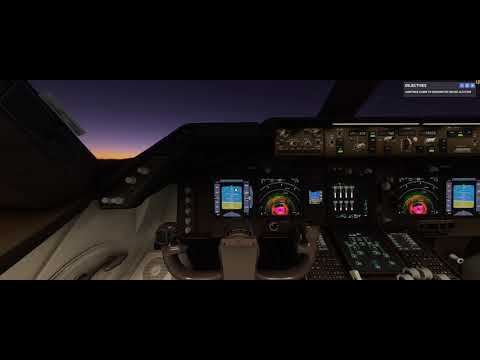 On the bright side, they seem to be aware about the issues with the autopilots, and working on a fix:

I tried the 747 Intercont. IT seemed to not climb to the cruise altitude. IT had to easily of a Overspeed alarm even when mix was correct.

The autopilot in general needs work, often when its kicked in it cna not land correctly either and will go right or left of a runway suddenly.

I also cant slow the plane wirth a ■■■■. CAn put on air brakes, manual break but no reverse throttle not sure what command is or how to map it to my throttle quadrant. OR to map the flaps to my blue throttle quad and maybe reverse engine thrust to red.

CHanged flight plans all together.

ll set gate after that.

AutoPilot does just fine, so basically leave co-pilot off until last second of landing if needed for faster slow down.

I have similar issues with b747 autopilot, climbing and throttle etc.
Can u managed to fly waypoint to other automatically? I need put heading myself after every turn.

Why with an L? That just means it is the left runway of the same heading.

The co pilot tends to land incorrectly left. and make sure on flight plan you select the longer runways. 4 times on international it auto selected the short, and it resulted in go around, as I had no time to decelerate the plane.

Istanbul oddly reverses their runways and the long ones are separate.

This is not true, if the runway happens to be longer it is coincidence. The L, R, and C simply refer to position of the runway. It has nothing to do with length. It is up to the pilot to study airport charts to determine length.

LOL, for two parallel runways L and R means Left and Right, not Long and Regular, as you might be imagining

So the same runway is both Left and Right, depending on the direction of the wind, which decides in which direction you will lend on that runway. If you look at any such runways they are labeled L at one end, and R at the other, so clearly that has no relation whatsoever to length.

The only exception, as described above, is when you have 3 parallel runways, which will be labeled L, C, R (Left, Center, Right). In that case the center runway will be labeled C at both ends, since it will be in the center regardless of the direction you land on it.

Haha it’s Runway Left or Right or even center

Geez what do you think it long or regular length?

NO . IT is becuase of the odds the co-pilot will drift right of left of the runway. When pickig na L(eft) and the more direct direction to it, the co-pilot struggles less and tend to land center, rahter then going left of right, Especially on the 747.

Right runways oddly , tend to have it go in the middle of two different runways. As in they programmed one and not the other.

On IFR high alt settings adjusted to 28,000 to 30,000 even and left to do its job from approach on, it has been far more accurate to left sides rather then right, where it tends to go off suddenly on a taxi road. Even tho when instructed to climb, it ends to still auto throttle, when you manually adjust and let it take over at cruise it hold right on the recommended Air speed, rather then gunning it. Even tho NEo indicates the new engine, and a higher Cruise speed, the game alarms very low.

So far since changes, and only allowing co pilot to do approach or final, it has landed dead on.

Picked a right at start it landed middle of the two in San Fran and Seattle both.

Hey worked when I changed it. Always picked right after right before.

I noticed that also, If I change the direction it enters runway (that I choose) and pick the left, it will land better or most often.

I select A right or default entrance on far side, it comes in at a bad angle and hits the side road and skids off.

ya same issue shame when paying 117$ you get beta software this was released WAY to early. nose goes from 33 to 55% trim constantly…can’t hold altitude worth ■■■■… it like the real 787 is JUNK…

same problem…up and down elevating

If you’re bouncing all over the place once you hit your altitude, try going back to V/S mode and setting the rate to zero. That should stabilize the 747. Once the speed is stable, slowly adjust your vertical speed to get you back to the right altitude. Once there, you shouldn’t ping-pong anymore. Whether this is a bug or how the 747-8 works dunno. Its just been working for me.

On the 747 and 787 both vnav, flc and vs do not work well are totally unstable. I have stopped using them until they are corrected with a new patch