Look at the calculation of the distance to the destination. 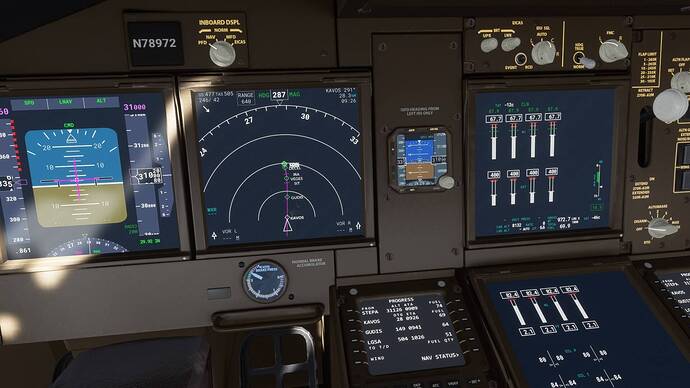 We are on a range of 640 NM on the ND, and the distance to the destination is less then 320 NM.
while on the FMC the distance is 504 NM.
How does programming such a simple sum of distances on a list of waypoints makes such a great deal
for programmers that have programmed a list of complex equations to develop this kind of graphics?

Yeah I noted the same thing yesterday on a flight from Vancouver to Honolulu. Distance and therefore the ATA time was total off for PHNL.

ATA ( Actual Time of Arrival) or ETA (Estimated Time of Arrival) should be in UTC time not local time, especially on long range flights were each waypoint could be in a different time zone. If these were all calculated in UTC they would not change and it would be much easier for the calculations to be correct. I’ve also noticed during the flight that the distances to the way points never seems to change, nor does the distance to the destination, however these ATA/ETA times keep changing. This makes it very hard to understand how much longer the flight will be. Something needs to change (program-wise) so that the predicted ETA time remains relatively constant, obviously depending on wind and speed changes.

It would also be nice that there was a clock on the 748 dashboard in UTC time as well as it would be even nicer that the “time” was actually in sync with actual real time when flying in “live weather”. I’ve noticed the time shift (in the simulation) is more apparent when going east or west as opposed to north or south. (The time shift is usually several minutes, slow by 3 to 7 minutes over the course of an hour.) Maybe this has something to do with the shifting time zones during a long flight which wouldn’t even play into it UTC was used on a consistent basis.

There MANY issues with the 748 FMC. Among the many listed above: Just try to delete a particular waypoint from the flight plan while in flight, not possible, nor can you add a new one. The delete command works but not on the one you select. Making the resulting deletion a surprise… one that you cannot get back as adding anew ine back in does not work either. C’mon guys, did anyone actually test any of this stuff?? Do we need to switch to a third party add on to get things to function as they should?.. really? After all the “updates”???