A310 Fuel Burn not accurate?

seems like the fuel burn on this magnificant aircraft is too low. Anyone else?

Hey, I’ve been experiencing the exact opposite. I load up the plane according to my simbrief ofp and I find that I always end up short on fuel. I did a flight from Doha to Hong Kong today at M0.77 (7h32 mins flight time) and when I was just over an hour away from Hong Kong I found myself with 9% fuel left wich was not nearly enough for the rest of the flight. I had to mid air refuel using the tablet. I’m also using the custom simbrief profile by inibuilds. I think this is a problem on simbrief’s part though because it seems to be underloading the plane for some reason.

Thanks for your input, much appreciated!

Are you on PC or XBOX? You have been using Live Weather too?

Did you pause the flight at sometime? I mean Active Pause or hitting ESC and sitting in the menu screen. That would be a known bug, because the plane would still burn fuel, but not move.

Really strange issue. On all my flights I burn a lot less fuel than calculated by SimBrief, I am a PC user.

I’m on pc and nope no active pause or nothing. I just find it strange because on paper the plane has a range of 3500nm and Doha to Hong Kong is approximately 3400nm give or take. Simbrief should pretty much be maxing out my fuel but it’s only asking me to put about 40%. Important to not that on that flight I even had really good performance like at some point I was grounding about 520 knots.

What should have been left according to SimBrief? Thank you.

Ignoring SimBrief, what do the FCOM and Training Manuals for the real thing say?

How is this in the latest Beta update? Ran into this issue today on the previous build, where on a trip from JFK to Munich I ended up having about 30 (imperial) tons of fuel at a waypoint I was supposed to only have 15 at (had set up a Hold there, just before TOD, for my overnight flight, and had done about 6 loops before I woke up ended up doing 8 in total and burned about 8-9 tons of fuel give or take).

Just a question, are you using the following Airframe

I did a few test flights and it is very close to actual fuel burn per way point. the final approach burn more and end up with ± 1000kg difference upon landing

Also am I just reading these wrong or is the display wrong. If its wrong, which is the right one? The analogue fuel gauge is reading a burn of about ~6.5x1000 PPH yet the digital is reading ~5.6x1000 PPH.

In my recent flight with the second A310 update, the fuel burn was accurate. However I did not test a long haul flight yet.

As Simbrief does not take waypoint speed or altitude restrictions into account, there may be discrepancies between Simbrief and actual fuel burn during the flight but the final fuel on board should roughly match.

Any experiences with the current second update much appreciated!

These gauges display two different stats. The analog needle displays “FF” or fuel flow, and the digital numbers are “FU” or total Fuel used since engine start. In your case 5.84 and 5.89 thousand.

where i can find that profile?

Do you have a SimBrief profile to use?

Ahhh…okay I get it. You’re right they do seem to be slightly off.

In the latest beta version the fuel burn vs SimBrief is really spot on until TOD, but then it is not accurate. 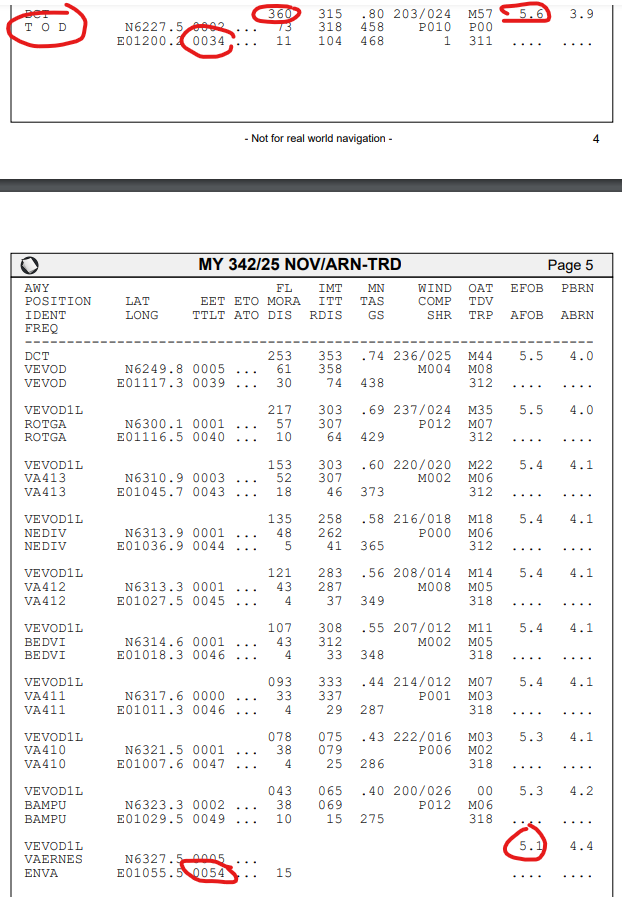 This is a planned fuel burn of 0.5 tons for 20 mins of flight. Actual fuel burn until touchdown 1.7 tons, arriving with 3.9 tons FOB. This required the whole 15 min contingency reserve, even though I had no delay on the flight path, so near optimal conditions.

There should be more drag and fuel burn on approach calculated in the SimBrief profile.
Roughly there is 1 to 1.2 tons more fuel burn on each of my flights after TOD.

@EllsGaming : is this something you or the team could look into, I mean tweak the provided SimBrief profile? Or is this something I can do myself? Adjusting the P-Factor affects the whole flight unfortunately.

Many thanks for your kind help.

Heya :]
We got more reports that in the recent Beta the fuel usage is no longer corresponding to the SimBrief profile. We will investigate this