I need/want to purchase a new graphics card for my PC:

My first choice would be the RTX3090, but it´s imposible to get it in Spain. And it will be impossible in the near future. For this reason I´m thinking about the AMD Radeon RX 6900 XT.

Do you think I will see any improvement in FPS and smoothly?. And will G-Sync be a problem?

Sorry for my bad english

All depends on what you’re currently limited by.
If you’re limited by the main thread, the new GPU won’t help.

If you’re limited by GPU, it might help, but you’ll probably run into a main thread limitation (especially if you’re not running at 4K).

Thank you very much!!!

Can someone please tell me if you have problems with AMD GPU 6800 or 6900 (FreeSync) connected to a G-Sync monitor like mine?

I know that it will not be possible to use the Monitor G-Sync correctly, but will I have tearing problems?

I received my 6900 today, I had 1080ti.
I can install it Sunday evening and then I will be able to reply

Ok Sir. I will wait until Sunday.

3090 and 6900 are not for gaming.Don’t let them drag you into this.Watch Gamer Nexus and other in utube to see for yourself.
I own an 6800xt Nitro Plus Special Edition and it’s more than anyone needs

I have a lot more experience than Gamer Nexus.

I think it is somewhat insane to pay more for a GPU than I spent to build my entire system 14 months ago.

Prices will settle out again, but not likely in 2021. When new cars are unavailable due to shortages of microprocessors, you have to realize just how bad things are with the supply chain.

But 6900xt has a lot of stuttering

I need to do a deep study of control panel.

GIEI: Thank you very much for the quick information !!!

I would really appreciate it if you could tell us if you have managed to eliminate those stutters.

Lots of info missing here? i see the framerate increase but whats the resolution and the sim settings, also What’s the rest of the pc componentry so it can be compared to the OP and after upgrading the card did exhibit a bit of stuttering as well. But after going into the adrenalin software and sorting it out the stutters cleared up.

Presently at work so i cant share my driver settings until i get home in a few hours but i presume you should be able to resolve the issues quickly and optimize your card and system to eliminate the stutters.

For reference (under normal operations) a 5900x +32gigs ram + 6800xt would typically net 40 fps within the cockpit with weather at a small/med airport rising to 60+fps if looking at clear sky from the outside. At least mine does at ultra settings with the render scaling bumped up to 110. on 3440x1440p.
All bets are off if landing at KORD or any of the airports that Asobo need to fix where everyone knows its bugged. Those will drop to the high twenties with literall 3 to 5 second freezes but you can tell that something is wrong and the developer needs to fix those . Otherwise a non bugged large airport will drop you to the mid to low 30’s on approach and it will still be smooth.

If i was to drop the render scaling to default 100 im sure i would pick up more frames but i prefer the more refined look having it at 110.

And no i don’t have driver timeouts and ctd’s like what the last gen (5700xt) AMD card owners are suffering with.

And no i don’t have driver timeouts and ctd’s like what the last gen (5700xt) AMD card owners are suffering with.

The 5700XT is actually incredibly well behaved, just keep the driver version on 20.10.1 (from before the 6000 series was released).

Today I tried Ultra settings and fps stay on 35 too.
Don’t understand what this ■■■■■■ drivers are doing.
I know before buying that AMD are worse than Nvidia but I didn’t think so much.
Every game has something strange.
But hey, can’t buy a Nvidia here so amen, I’ll suffer until next 40X0

Sounds like your CPU is maxed out, if the FPS doesn’t change with different graphics settings then the bottleneck is somewhere else in your system - most likely your CPU.

Sorry but im gonna have to disagree with you here.
The card is not the issue if i can use the slower card and sit at 40fps at ultra settings with the same resolution as you with headroom to spare (render scale%110).

To get the max out of the sim the cpu amd the gpu have to compliment each other. So what CPU and Memory are you running ? 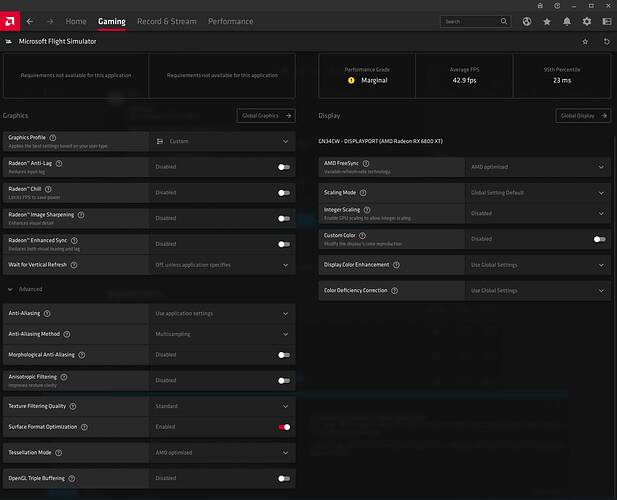 These are my settings for the Flightsim profile. There is the average fps in the screenshot as well (It records that info)

It’s all ok, as you can read on the official page it’s an Nvidia game.

Game is not optimized exclusively for Nvidia hardware. But deep down you probably already know that your system is no longer in balance because you’re on a 3700x

I personally know… because that’s the chip that I upgraded from after getting my 6800xt and for a few weeks I still had a 3700x. Card was too strong and it’s sitting there waiting on the cpu to give instructions and stuttering on top of it because the cpu single thread is maxed out and the card is waiting with nothing to do… result?.. frametime increase… absolutely nothing to do with amd or Nvidia.

Your graphics card has nothing to do with your issues. You want this sim to work properly? Your entire system has to be upgraded and in balance.

You want a little more smoothness? Push the render scaling up a bit so the card actually has something to do on its own so the sim doesn’t flip to mainthread limited as much as its doing now.