The Airport anda secnery in africa are forget by MS

Hopefully, somewhere off in the distant future, Africa (along with India and SE Asia - and S. America) will all get some love from the developers.

MSFS 2020’s world map tells its own story. Just look where the pins are. And where they are not.

I believe it’s not so much a matter of forgetting, but a matter of available data. Yes, there could be more POIs, but the rest depends on aerial imagery for the ground textures. And photogrammetry requires special aerial photography from different angles to calculate the 3D model of a city. All of which is more available in denser populated areas.

Getting the required data of course is also a matter of cost, because you have to hire pilots and photographers to collect that data before you can even start processing it.

I appreciate your points and I know the developers would like to update more areas of the globe. The picture at the moment is, however, unavoidably in favour of N. America and Europe (although kudos for the Japan update), with Scandinavia (more Europe, in other words) to follow next.

At this stage, and to avoid unnecessary delays, I’d willingly forgo POI’s, in favour of cleaner Bing satellite imagery and some water masks for the territories I mentioned. Anything, really.

I guess it’s all down to expectations, but really enjoying my world tour which happens to be over Africa right now with some stunning images

Leg 61 - Socotra, Yemen (OYSQ Moori Airport) to Entebbe, Uganda (HUEN Entebbe Airport) [Screenshot 2021-04-10 081948] This leg: 1,502Nm, 4:39 flying time Total so far: 68,485Nm, 261:21 flying time Today we are heading into Africa proper, and taking a pretty straight line from Yemen to Entebbe in Uganda. This is at the edge of our range, so we are going for a pretty straight line for our route. Our approach to Entebbe will be from over Lake Victoria. On the food side of things, today we are…

Leg 62 - Entebbe, Uganda (HUEN Entebbe Airport) to Makokola Retreat, Malawi (FWCM Club Makokola Airstrip) [Screenshot 2021-04-11 101212] This leg: 1,318Nm, 5:06 flying time Total so far: 69,803Nm, 266:27 flying time Today we are flying further South through Africa and into Malawi, but taking a bit of a detour through Kenya. So we are first heading East to Nairobi, then on to the East Coast of Africa to Mombasa and then South to Dar Es Salaam in Tanzania before heading back South West and in…

Leg 63 - Makokola Retreat, Malawi (FWCM Club Makokola Airstrip) to Mauritius (FIMP Sir Seewoosagur Ramgoolam International Airport) [image] This leg: 1,376Nm, 5:28 flying time Total so far: 71,179Nm, 271:53 flying time Well, remember I said we were heading South next? OK, so I lied. I’ve never been to Mauritius, and we are not that far away from it here…so why not? Plus we get a chance to fly over Madagascar in the process. So we are going pretty much straight East today, flying low altitud…

Leg 64 - Mauritius (FIMP Sir Seewoosagur Ramgoolam International Airport) to Maputo, Mozambique (FQMA Maputo Airport) [image] This leg: 1,437Nm, 5:19 flying time Total so far: 72,616Nm, 277:12 flying time Today we are getting back on track by heading back to Africa. We’re going to take a straight line, high altitude flight from Mauritius to Maputo, the capital of Mozambique. We’ll be flying over the top of Reunion Island again, although that will likely be far below us, and then over Madaga…

Leg 65 - Maputo, Mozambique (FQMA Maputo Airport) to Langebaanweg, South Africa (FALW Langebaanweg Airport) [image] This leg: 1,064Nm, 4:24 flying time Total so far: 73,680Nm, 281:36 flying time Today we are flying from Mozambique to Langebaaweg, a town just West of Cape Town in South Africa. On the way we are detouring over Pretoria and Johannesburg before flying straight across the middle of South Africa to Cape Town. There we will fly over the Cape of Good Hope itself where the Indian Oc…

Leg 66 - South Africa (FALW Langebaanweg Airport) to Benguela, Angola (FNBG 17th of November Airport) [image] This leg: 1,314Nm, 5:10 flying time Total so far: 74,994Nm, 286:46 flying time Today we are heading up the West Coast of Africa, and I’ve decided to try to follow the coastline as much as possible using local airports as waypoints. So we’ve got a lot of waypoints! Our itinerary is then: Langebaanweg (FALW) Doringbaai Airstrip (FAVJ) Papendotp Airport (FAVQ) Hondeeklip Bay Airstrip…

Leg 67 - Benguela, Angola (FNBG 17th of November Airport) to Bangui, Central African Republic (FEFF M’Poko Airport) [image] This leg: 1,094Nm, 4:17 flying time Total so far: 76,088Nm, 291:03 flying time Today we are heading North into central Africa - literally as we are going to Bangui in Central African Republic. On the way, we are flying over Kinshasa, the capital of the Democratic Republic of Congo and Brazzaville, the capital of the Republic of Congo, and then we are flying roughly alo…

Heading to Timbuktu (or Tombouctou I think locally) next

The Eye of Africa is stunning in VR, i flew up to about 14,000ft and dropped down to land right in the middle, some of the cliff edges are superb and the whole impact/geology of the Eye is incredible. Well worth a visit

For missing airports, check this topic to see if it has been reported before:
https://forums.flightsimulator.com/t/missing-airports-sent-to-zendesk/165814/288

If is not listed, please report any missing airports to Zendesk. You can create a new ticket by clicking the “Submit a Request” link on Zendesk’s navbar.

After reporting to Zendesk, then add the airport to this topic:
https://forums.flightsimulator.com/t/missing-airports-sent-to-zendesk/165814/288

You do have THIS available for Africa…

The Eye of Africa is stunning

Glad you mentioned it. I’m on a world tour now and will make it a point to see that. I’ve never heard of it before.

Everything below equator line was forget by MS/Asobo

Not really. You notice the faults in the areas you fly in. You can see the same sort of defects in North America and Europe as well. 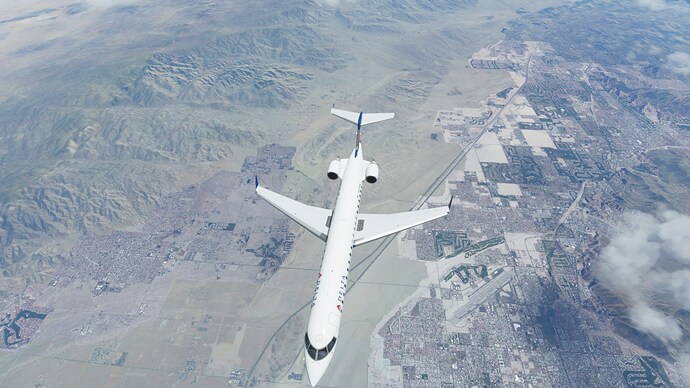 Another thing to bear in mind, Africa is huge. It is easily more than double the size of all of the world updates put together that we’ve had so far…

Did you see my post above? Just not true

Everything below equator line was forget by MS/Asobo

I suspect (and hope) they will get to the Southern Hemisphere eventually.

On a side note, as I’m doing my world tour I started wondering how the hemispheres compare in land area and population. The sources vary a lot but ballpark, the North has over 2/3 of the Earth’s land area and 90% of the population.

Flew a couple flights cross Africa with the Longitude and, yup, its huge.
Sahara is beautiful, but gawd its huge.

It’s more the middle that has very bad data. From Victoria falls to South Sudan and to the west from there 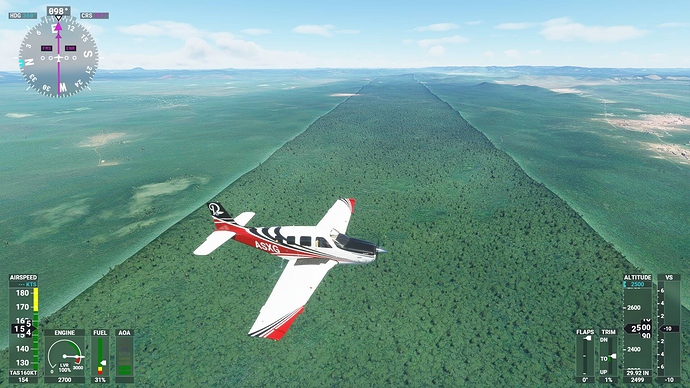 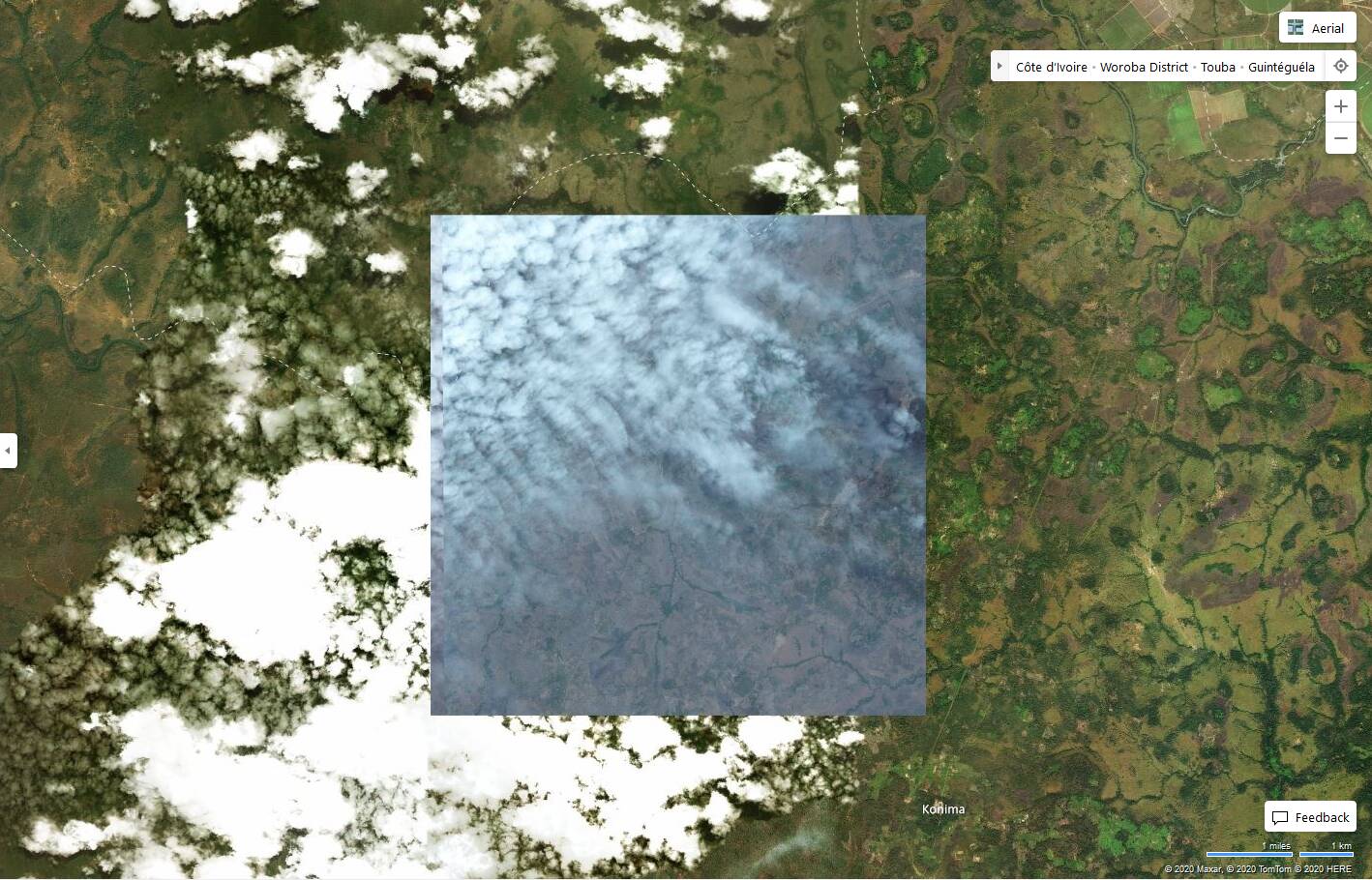 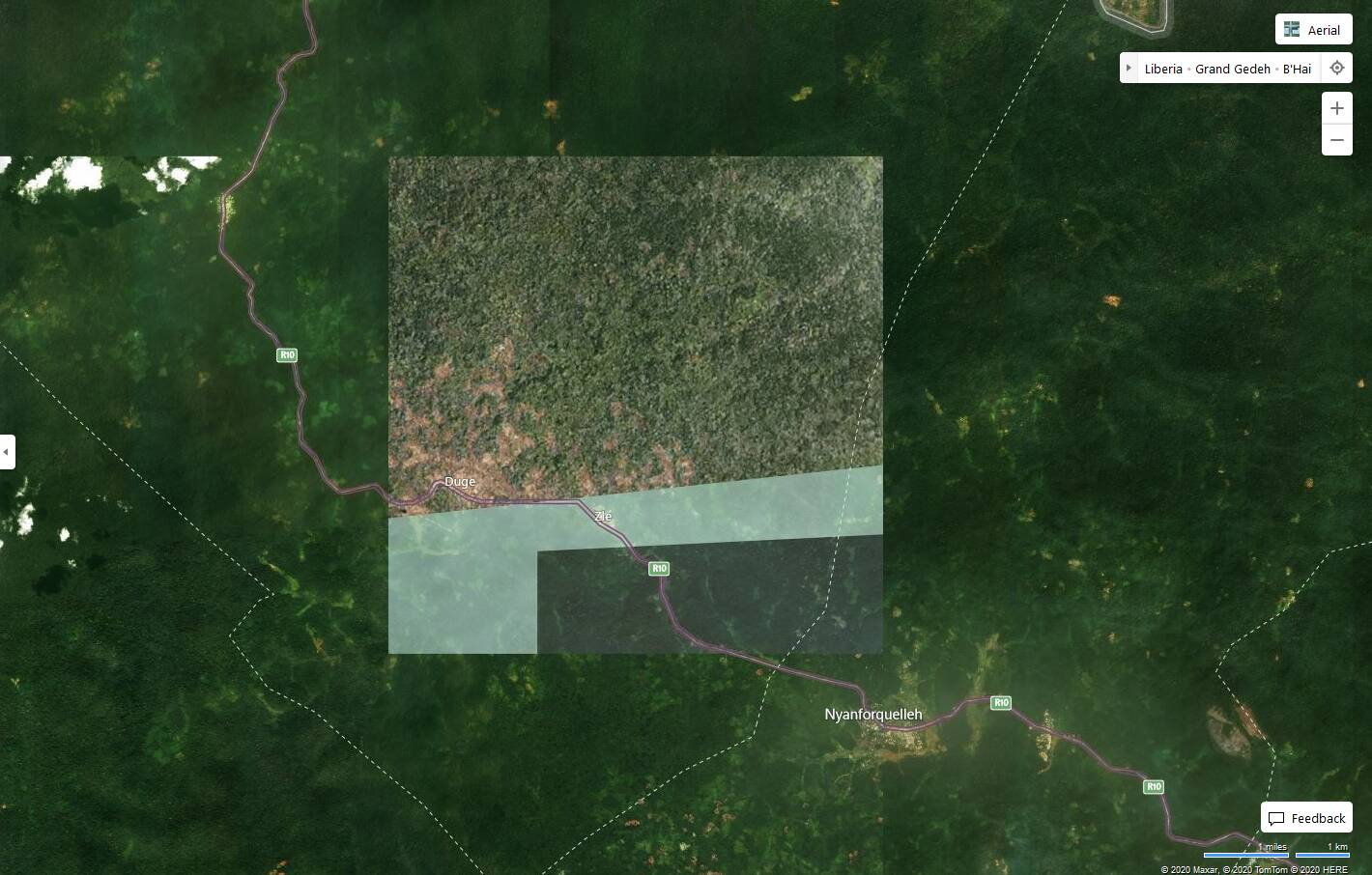 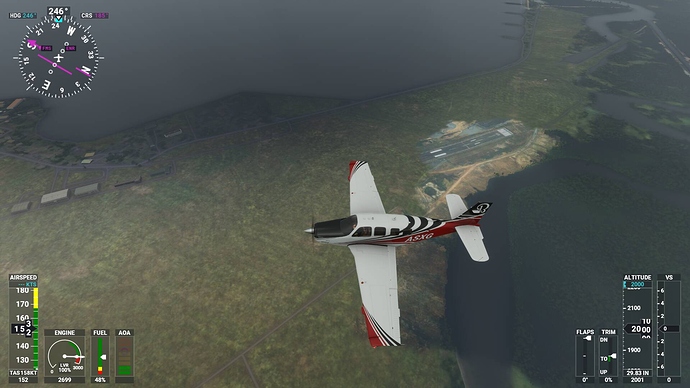 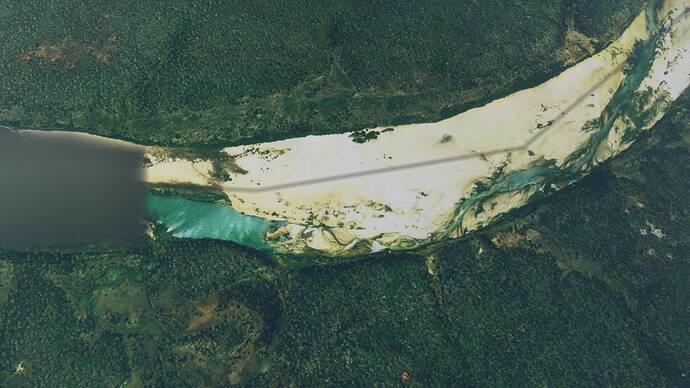 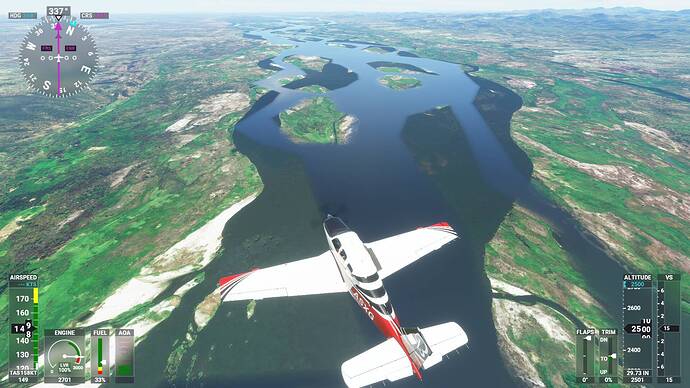 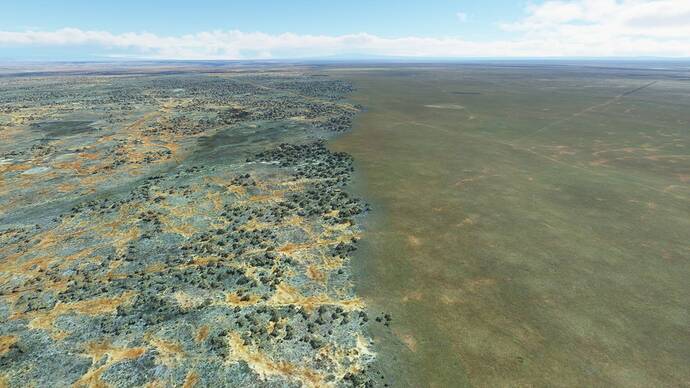 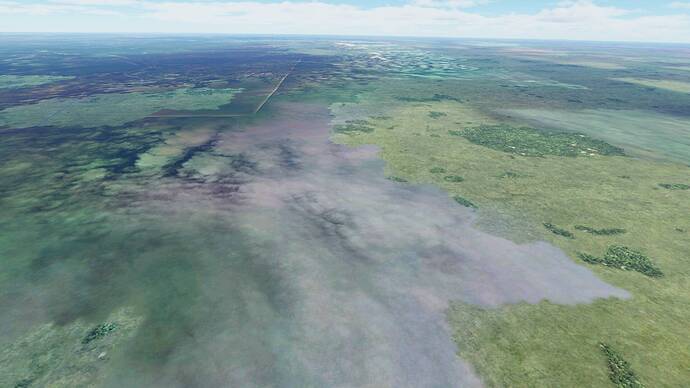 Africa is not alone though 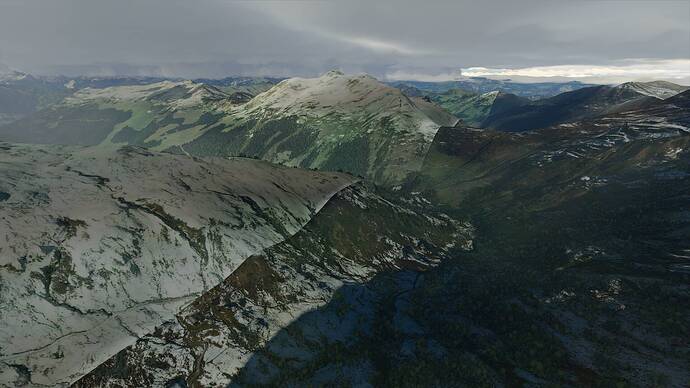 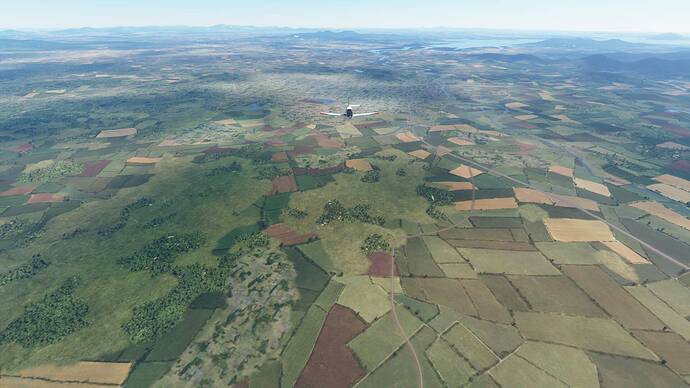 Zhangjiajie Grand Canyon (left is Bing, nothing to see in game) 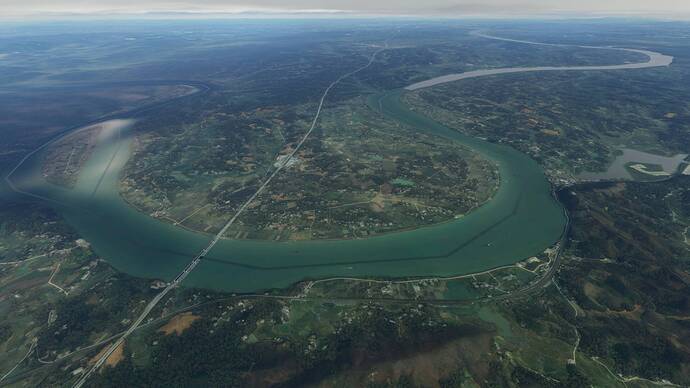 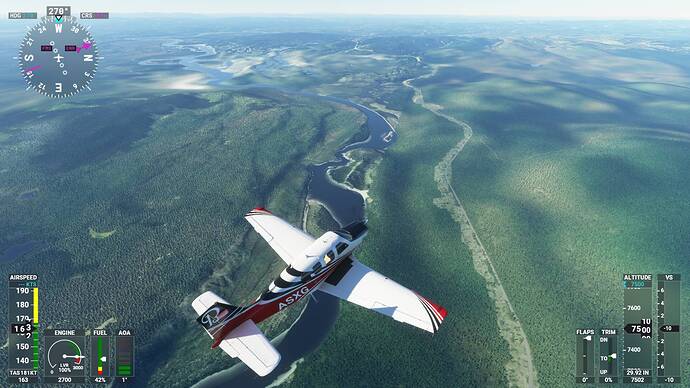 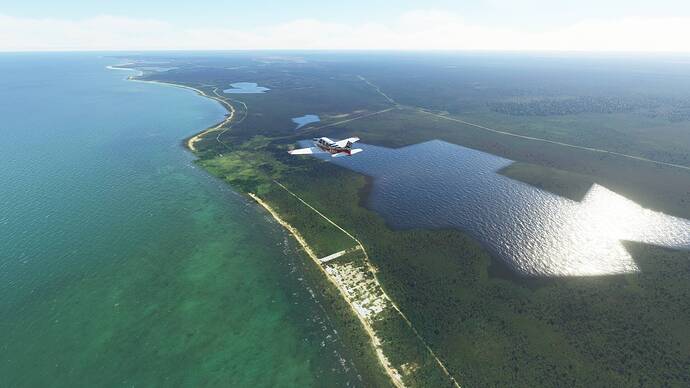 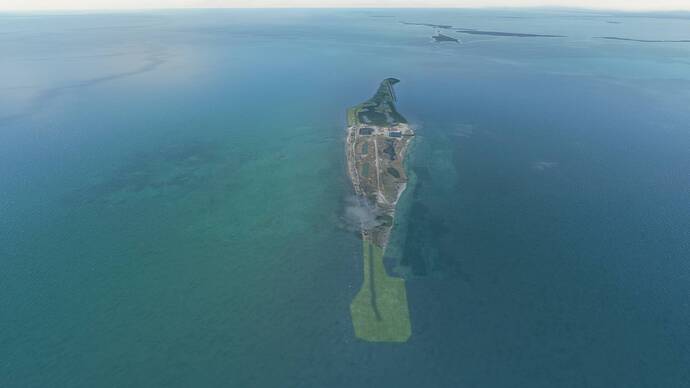 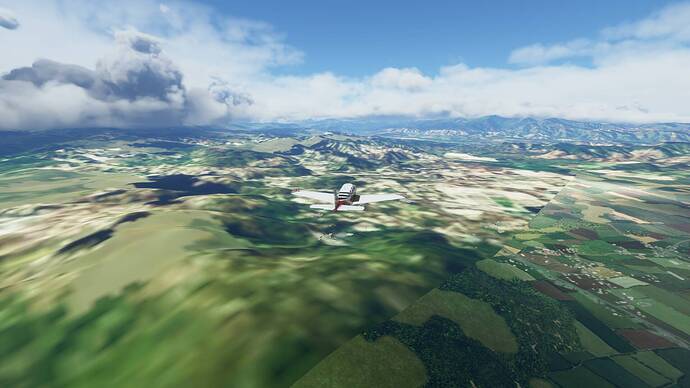 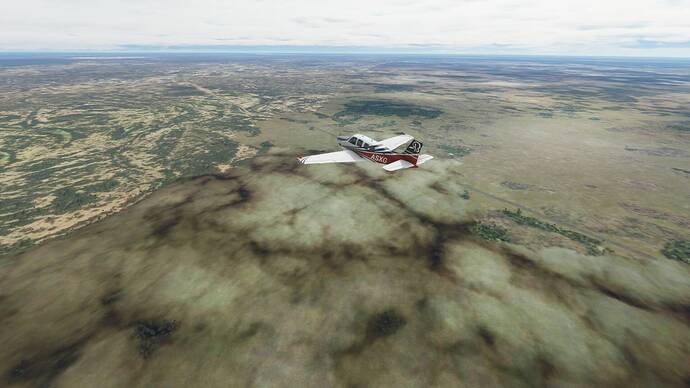 Far North (Siberia, Nunavut, Greenland) and Antarctica are a mess as well. But you can fly everywhere! (can’t land at the poles though, terrain stops at 85 degrees)

Not much Asobo can do, garbage in, garbage out. Bing needs to step up.

Way better than FSX. You should have seen FS1. lmao

Satillite data and the age of that data. Those pins represents more and recent sat data, simple. No hidden secret North America has the most data. I have personnally pass the Google car taking photos and looking to see if I have been on any. Traffic cams, weather cams, police cams, cellphones and many more in North America. Cities get more love than the countryside, why?. They have more data availiable.

You do know that Afirca, The Mother Land, is BIG. Not to much satillite data of deserts and bushes out in the wild. I would say some of the sat data is probally from oilers looking for oil. I would not pay the price for sat pics of Africa without a payoff or advantage of some kind. Sat time is expensive.