After having to reinstall FS2020, the game does not show in the Store Library and I cannot sign into the Xbox app

Recently I’ve had to restore my PC with a backup image of Windows 10, consequently FS2020 was wiped out as it wasn’t installed when I did backup. I was having different issues with Windows so I had no choice but to revert to a previous backup.

I was hesitant to do that, thinking that I would have a problem with Flight Sim, but when I found info on how relatively easy it would be to reinstall and run it again, I didn’t worry about. Unfortunately my first instincts were correct. I’ve come to know the notorious unreliability of Microsoft, and they’re even more insidious instability and unreliability of FS2020.

Naively I bought the DVD version thinking I would avoid having to use those useless apps of Xbox and MS Store, and now, it’s precisely because of these poorly executed apps that I cannot run the game I paid for! Mind you, it’s not the first time I’ve had a problem with these apps with FS2020. Just like millions of others, I’ve had the inexplicable problem of trying to run the sim yet all that loads is the Gaming Services window.

This time around, basically what has happened is that the MS Store does not show my purchase of FS2020, nor does the Xbox app. I could only check that on another PC because the sign in does not work on my main PC, before and after the system restore.

I submitted a ticket to support and they responded surprisingly quickly, which I thought was great, but quickly realised it was just an automated response with a copy and paste answer to uninstall the Xbox app, clear the MS Store cache, that sort of thing, which of course was completely unhelpful.

I’ve sent them another thoroughly detailed response with multiple screenshots and videos explaining the problem and of course I haven’t heard anything back from them now, and I don’t think I ever will. I seriously doubt these people have any idea what the problem is.

I’ve tried virtually everything under the sun with these apps, all to no avail.

Short of having to buy the ■■■■ game again just to get another code key, I’m at wits end and was hoping someone may have had a similar issue and can shed some light on the matter.

I even asked the Tech Support mob if they could issue me another code key, wishful thinking.

The only other thing I haven’t tested yet is to install FS2020 on another PC to see if the MS Store on that machine will recognise the game. I could play FS2020 on that other machine, but it’s not up to par with my main system.

It’s infuriating being forced to have to use an app to play a game installed from disc. It’s obvious why they do it though, it’s purely marketing, it has nothing to do with practicality. They want to get as much up in people’s faces as possible to entice them to spend more money.

I’m sure when I say though that there’s plenty like me who are not interested in buying anything more from them, especially if it means having to use it through one of their pathetically unreliable apps.

I have played FSX for over ten years, with literally 100s of scenery upgrades, aircraft upgrades, addons, mods, utilities, you name it. And I’ve been playing MS Flight Sim for nearly 30 years since version 4 with 1000s of addons and upgrades over time, and I have never faced anywhere near the amount of the BS I’m facing with these stupid apps in the six months I’ve had FS2020. It’s a nightmare!

This must be the biggest rort ever, MS are making 100s of millions of dollars out of this sim, yet only half the people who have bought it can play the ■■■■ thing.

Sorry for the rant, I’m sure I don’t have to tell anyone here the level of frustration this game has caused. It’s great when it works, but each time you want to run it’s like fingers crossed whether it will actually work or not.

Hello @FlyingHog4338,
I have moved your topic into Community Support. The Bug Reporting category is for reporting confirmed bugs.

Check that your MS Store is signed into the same account that you purchased MSFS. Also check that all updates to Windows & the MS Store are current.

I made a previous post where I discussed an issue about having to do a restore of Windows 10 from a backed up image, which didn’t have FS2020 on it, consequently requiring a new install of FS2020. The problem with that was that MS Store had no recognition that I had actually purchased the game, which was the DVD version.

I haven’t received any feedback on that from anybody on here or indeed MS, no surprise for the latter, they take your money and then don’t care about supporting their software. I think they are pretty clueless anyway when the only help they offer is a standard copy and paste response, which hasn’t been helpful at all.

Apart from that, I just discovered something interesting, I managed to run the Xbox app on another PC (not being able to sign into it on my main PC, another long story) and signed into it there and it states that my MS Store account is different to my Xbox account. The problem is that they are not different, I use exactly the same credentials, i.e. email and password, for each. I do not have any other MS account, I only have the one.

All I can find on the Xbox app for my login info is under the Account settings and as I said, it is exactly the same as my Store account. So why am I getting that message? This is quite possibly the reason why FS2020 is not showing in the MS Store app.

If I set the store account the same as the Xbox account, which is an option that is presented to me while in the Xbox app, when I go to login back into the MS Store account there is only one email option, which of course that’s all I expect to see as I only have one MS account that I use to sign in with.

Any advice you can offer on this would be most appreciated, thank you.

If I can get my money back on the DVDs then I will re-purchase flight sim via Steam, instead of being continually stuffed around by these pathetically unreliable marketing apps Xbox and MS Store.

Above post edited to comply with the Code of Conduct.

When purchasing, an account is required to know what has been purchased and to authenticate it.

Thank you for your reply. Unfortunately, the problem remains however. I only have one account, the same account I used to authenticate the sim and sign into the Xbox app and the MS Store.

Did you submit this to Zendesk so they can verify the authentication of the DVD digital license and your gamertag?

I did submit another ticket with them explaining all that, they did reply stating “Flight Simulator Support Team is not able to handle any issues regarding your MS Account or Xbox Account.” And sent a link for how to migrate one account with another via the Xbox app, which I already did as you will see below.

I thought I’d give it another go last night and log into the MS Store, and this time it showed two emails, a yahoo one, the email account I’ve been using for the MS account, and a gmail email. The gmail email is an old email that I haven’t used for years, yet for some reason I obviously used that account to sign into the XBox app and to authenticate the game with.

Yet, late last night when I had one more attempt, lo and behold, it showed another , the gmail account. I can’t work that one out, and the PC had not been rebooted throughout this whole process

You can see the screen shots here… 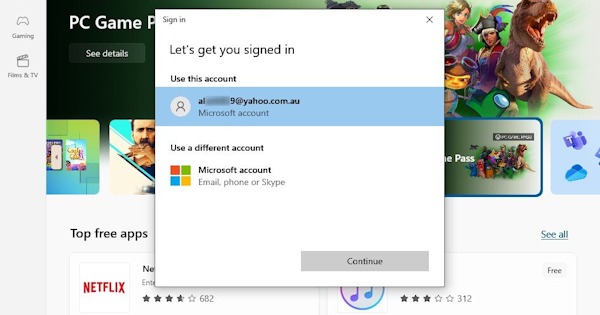 So finally I now see FS2020 in my library in the MS Store, I don’t know why now though but there are two instances of the game, as you can see from the screenshots.

I have only updated one of them, but don’t understand why there’s two showing. How Microsoft has arranged this is doing my head in.

At least now I’m able to get the sim back up and running again, installed it via the MS Store, not the DVDs and it is now updating.

That does sound confusing.

The reason you do not need the DVDs to install is because when you first activated it, it turned it into a digital license with the MS Store.

However, you’ll still need disc 1 in while playing.

Glad you got it installing!

Thanks. It’s a bit of an unusual way to sell the software, on DVD, only to change it to a digital licence once installed then no longer needing the discs for any subsequent re-installs

I’ve created ISOs from the DVDs which is how I installed them originally to prevent any disc read errors which some people seemed to be getting, so I’ve just mounted the 1st disc onto a virtual drive to run the game.

I wish I knew all of this in the beginning, I certainly wouldn’t have worried about buying the DVDs, and it would have saved quite a few hassles. Oh well, we live and learn, sometimes the hard way

The DVDs are 3rd Party and were meant more as nostalgia; marketed by Aerosoft. MS doesn’t handle support for those, but rather Aerosoft.

For them to work with MS and Xbox gaming, it needed that extra step of adding a license to the MS Store.