I had no problems either but after SU9 my sim started doing this..

I didn’t get it with Sim Update 9, just with the patch today. The sim updates and patches are so troublesome, everyone has pretty much made the sim worse. It’s been downhill for me since release really.

YEAP same approach that took place with GT7 in PS5 and then devs were forced to deal with it ASAP !!!

Hey guys, I had the same problem with random FPS drops after one hour of flying. When I restarted the game I was able to play fluently on high graphic settings but after one hour, even when I remained at the same position FPS dropped to single digits.

My Solution:
I don’t know wether it was fixed by the update yesterday or it was me because I deleted everything in my Community folder but the PMDG 737.

Hope this helps some of you.

I had the same thing today when flying from KMIA to EGKK.

The fps and GPU usage gradually decreased as time went on. GPU and CPU temps were all well within normal range at ~50C. The fps was around 5 and GPU usage peaked at 40% but dropped to 0% frequently at mid point of test. Frame time was between 90ms and 200ms. RAM usage increased from 6GB to 14GB and audio started crackling during test.

Interestingly when my monitor resumed from sleep during the test the aircraft and environment audio from MSFS failed to work and RAM dropped to 3GB before slowly increasing again despite no audio except menu clicks working in the sim.

Test was stopped before making landfall in the UK as fps was hovering between 0 and 5 fps. Frame time was between 150ms and 400ms at this point. Sim was very unstable and clearly not working well enough to even bother attempting a landing.

The dev mode fps counter was flipping between limited by CoherentGTDraw and CoherentGTUIThread.

I do have Toolbar Pushback installed. No pop out windows were open at time of checking fps.

Mods in use during test: 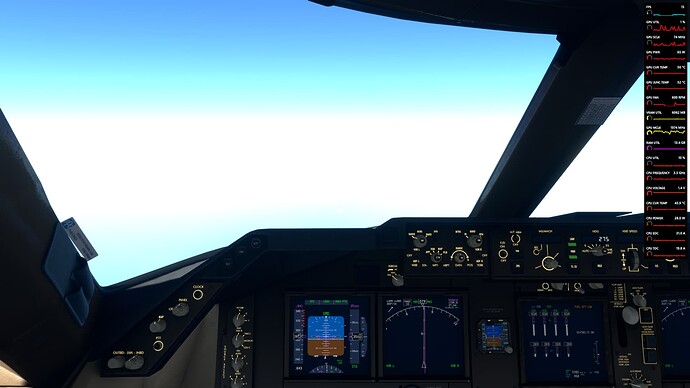 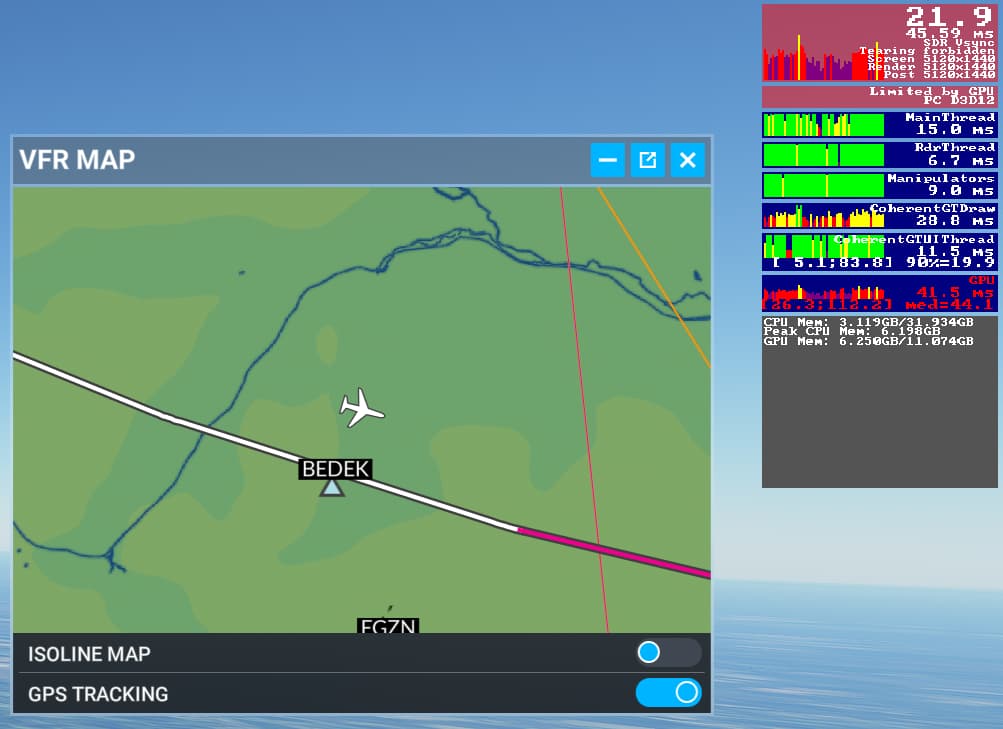 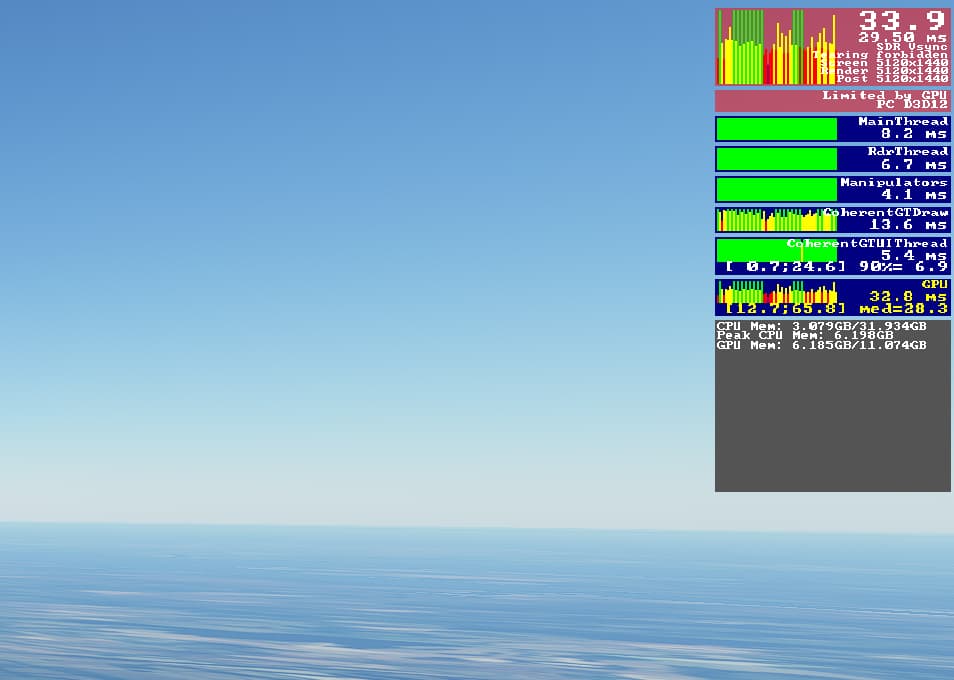 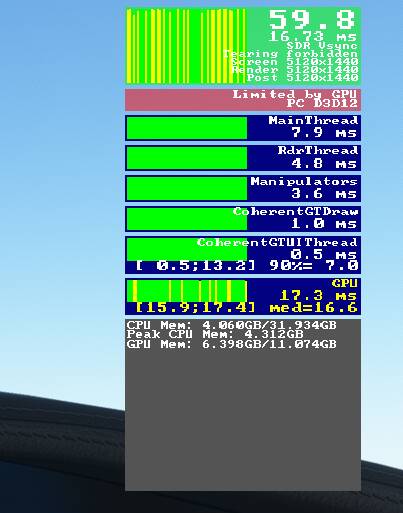 (edit2) return flight over 6h completed, of 7hours, no waypoints, origin and destination only for the gps to work : 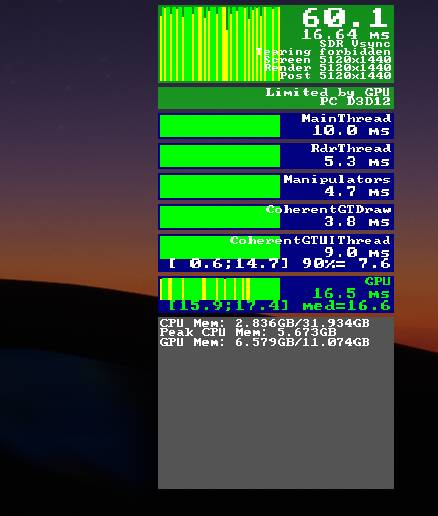 I disable Steam, VGA and Xbox Game bar overlay and my game is stopping lagging and audio crackling. FPS returned to normal. Big hug guys, i hope to helped!

When this happens (Stuttering audio and bad FPS) i just save the flight and reload the sim. Saving works great now.

Hopefully they will fix these performance issues anytime soon.

My experience, as previously posted, has been slightly different in that FSP would crash sometimes only minutes into a flight. After the Update 9 patch yesterday, I did a flight with abysmal results. So feeling disheartened, I installed the latest nVidia drivers, rebooted, and viola!, no more drops. I’m 8 hours into a 9 hour transatlantic flight with no drops. Fingers crossed this keeps up.

Sorry, We had an Update 9 patch yesterday?

For me it’s the VFR map.

I’m currently flying the FBW A320 and after 2 hours the FPS dropped from 30fps to 5-6. I closed the VFR map and the fps immediately jumped back to 30fps.

I don’t know when the performance issues started. I flew the TBM with the WT mod for 5-6 hours straight a month ago and the fps was okay. Though I suppose the WT mod uses a custom map. I flew the A320 for the first time in 6 months just yesterday. I haven’t really flown with the VFR map on for a long time in a year. So I guess that the issue was introduced in the last year.

Im right now in my second flight in a row without leaving the Cockpit. FBW
So far no drop at all

Pc is still on and MSFS still running. Airbus parked at the Gate. Guess i will make a third flight shortly. All in all the Sim is running at least for 8 hours. No degradation at all.
Didn’t make a Flightplan,only departure for the first flight. The sync from the FBW MCDU seems to work flawlesly. Also ingame ATC was spot on for the 2 flights

After almost 2 years of this simulator we still have the same problem. incredible.

I am finishinig a flight with 7 fps.

Made my 1st PMDG 737 Flight.
I had to save and restart the sim Mid-Flight

Then the Perf degraded again when on Final

Dear, I managed to solve it by following step by step what this page indicates. The only thing I omitted is the bandwidth and the settings inside the simulator. I just finished a 3 hour flight and the fps never dropped