I still don’t know why Microsoft trusted Asobo, a company whose experience is questionable, for such an important project. Asobo has never produced anything which is worth playing, at least according to me. They should have entrusted this project to a real and reliable AAA game producer.

My guess is that it went like everything nowadays, looking for the cheapest ?

What fix is that?

Try turning ipv6 protocol off in your adapter settings for internet. Not sure why at all but when I have that on I get drops in performance and weather stops after awhile. Never did a scientific study of issue but I know I don’t get any drops after shutting it off. Worth a try? 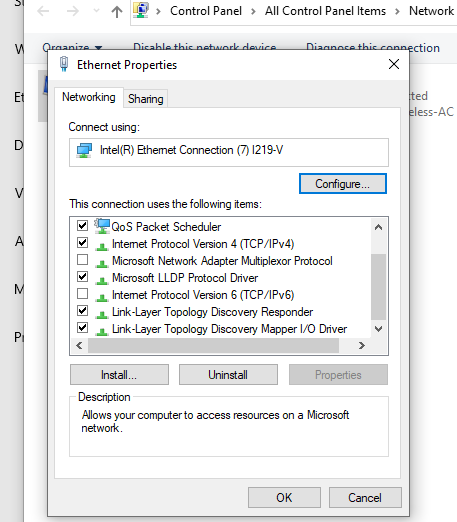 Asobo is a contractor managed by Microsoft.

Playing with the registry, related to MSFS, is playing with fire. Unless this modification is aproved by Asobo/Microsoft I will never go for it.

If your’re too afraid to do that, fine. To each their own

Same issue here. After SU9 and its patch; before & after 5/12/22 Nvidia driver update. Unplayable framerates where before SU9 I was on high/ultra with consistently smooth frames (except for the occasional lag in long-haul flights in the default jets). I have no add-ons whatsoever - everything is stock.

Since the last hotfix I have also been experiencing this performance degradation, I’ve removed all my addons (except PMDG 737, Leonardo MD80), reinstalled the sim completely, nothing has made any difference, I have read through this whole thread, tried all the fixes, am at a total loss. I get like 30 minutes into a flight and then my GPU usage drops to 40%, and the framerate of the sim goes from 50 to 30 and degrades from there. I don’t know what changed, a few weeks ago I had no problems doing 3-4 hour long flights.

This happened to me today for the first time. A simple 300 NM flight with the TBM,which I had completed successfully a number of times over the last few days, suddenly turned into a horrible 5 fps slideshow. I noticed it when my GSync-screen started to flicker about 40 minutes into the flight. Just a minute later the frames where down from 60 to maybe 5. GPU usage was down to almost nothing and even CPU usage was not out of the ordniary.

I then disabled the real-time traffic but nothing changed immediately. Then I tried changing some graphics settings off and on again (TAA, terrain caching). And after about 3-5 minutes the sim had recovered and was back at 60 fps again.

I don’t think they have something like a garbage collector running in the sim, so the spontaneous recovery sounds more like some kind of time-out effect. I’m a software engineer but of course I have no idea how MSFS really works. But this sure looks like some kind of streaming thread pool filling up with tons of timing out jobs - maybe due to Asobo server issues or due to ISP issues. New jobs for essential data are then waiting to get their turn but there is not enough available slots in the thread pool for all required data jobs to complete and so you’re down to a latency of ~300 ms for fetching some essential data much, much slower than usual to continue your flight at >300 kts.

I would assume that this problem, when it occurs, rarely is noticed unless you fly very high and very fast. If you remain in the same area, not a lot of streaming is required. If you fly high and fast, the sim needs to stream constantly. If some of the required batch jobs start failing but have some kind of timeout attached, you’ll run into major problems. I guess fooling around in the menus and changing some graphics settings and stuff made some threads finally run into their time-out limit. This, together with turning of the real-time traffic, might have opened enough slots in the job thread pool to allow the new data to come in again and then at some point everything had finally caught up again.

Anyway, that’s my armchair analysis. Could be completely wrong but I’m 90% sure that his is related to the sim getting out of sync with some data it needs to stream from the internet so that in the end the fps are tied to the rate of the incoming data packets.

Nope doesnt work here. Something else is at foot. After the WU this morning it started running just fine again … Fps back to 20+ flew for 2 hours in the f18 no problems. We’ll see…

Definitely something up here. Even less than an hour in I realised I had lost 10 or so fps, 45 to 30 is very noticeable. Turned off Online Functionality in the menu, back to sim, back to menu, and turned it back on, back to 45 fps.

Something is not right here.

So I’ve done some testing (7 flights LIRF-EDDM, PMDG 737) with the dev mode performance counter open, each time changing different things ranging from BIOS settings (virtualization, hyperthreading) to which programs were open in the background (Simtoolkitpro) Each time from 10 minutes into the flight the mainthread frame time would slowly start increasing, and the framerate would decrease along with it. Just did another flight, with the online functionality turned off entirely, absolutely no problems at all, no loss of performance. I will continue to test, possibly trying a VPN or swapping out my routers, will continue to update.

I should also mention that in the past I have tried turning off online functionality in flight, turning back on, leaving off etc. to no success after the flight had begun.

I did a flight from Olbia to Trosmo today, as expected the performances degraded approaching from Tromso, I disabled live weather, enabled it again twice and the performance were almost back to normal.

So there is definitively a problem with the weather system.

The daily postings where someone thinks he has the solution are getting tiring after 2500 posts.
Because all is repeating