I use geforce experience mainly for the adjusting the filters of lighting etc. Also I would note that I do not use their optimization.

I got an interesting finding !

Just tested the FPS degradation overnight again by letting the aircraft sit on the runway without moving and I woke up after 8h and to my surprise the FPS had not decreased! However…When I took off to test what happens if I moved, there was a long freeze and a sudden increase in memory and my FPS tanked. 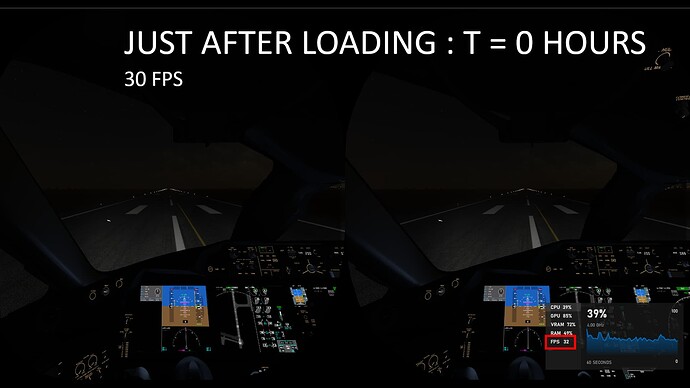 Here is after 8h of just sitting on the runway : 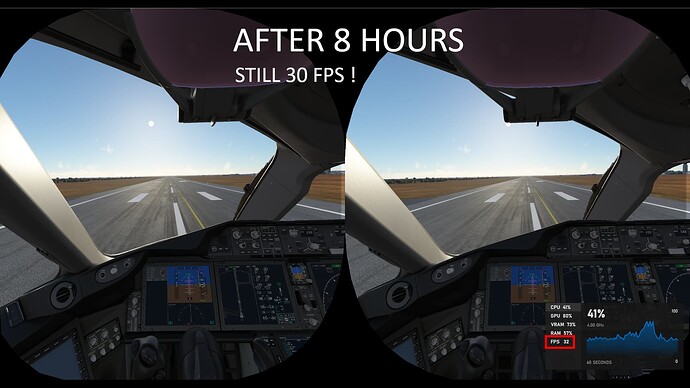 Here is after takeoff, aproximately 8 hours and 40 seconds 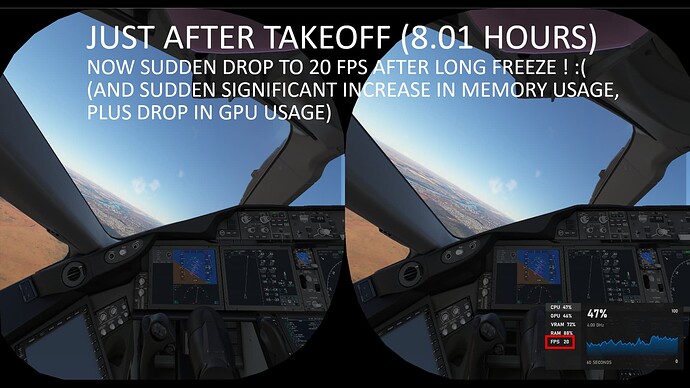 If we plot the FPS and RAM over time it looks like this :

And zoomed on the interesting part gives this : 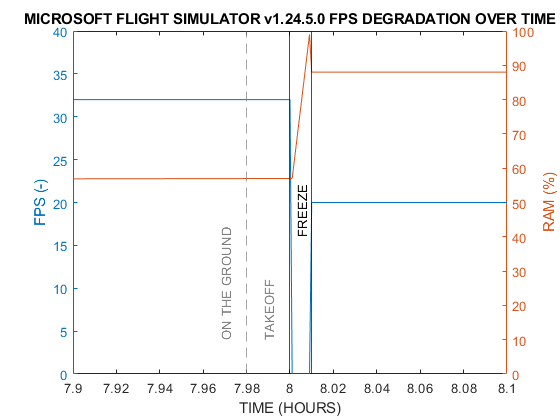 I think it’s fair to say the FPS drop is linked with this sudden explosion of memory, but why would memory suddenly explode like that?

Am I seeing things or are some beta testers saying su9 makes things worse as far as fps and associated problems?

Some are, but most are not I think, from what I have read.

I would much rather choose the time of my applying the update so that I could wait for the general concensus.

Exactly same for me Mike, except 4+ hours of flight and I was on final for WSSS 500ft from landing then CTD.

Neither of those last posts are FPS related, but crashes. 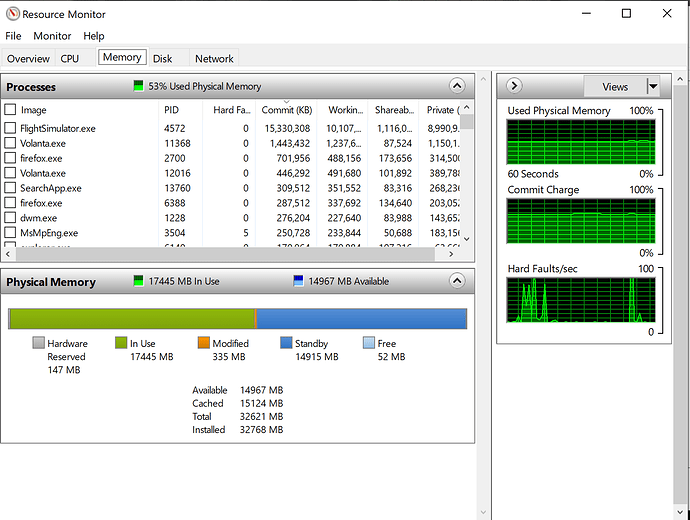 After trying couple of stuff (like turn on and off online functionality etc…)
Active memory usage drops to around just 5GB!! but getting more committed volume and fps is getting worse, probably I will get CTD in a minute 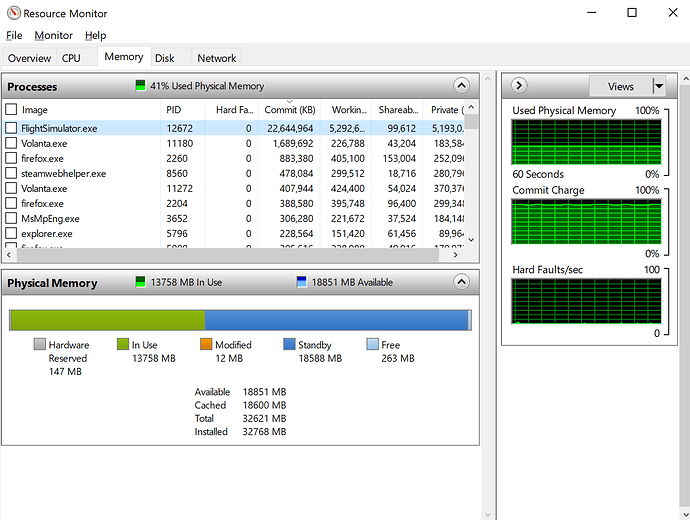 dude this happened to me as well 2 days ago. I was on approach from HNL to SFO… 4.5 hours and CTD during descent… driver fault as well, but wasn’t kernalbase.dll, was utcert or something

this is not a CTD topic… there are lots of existing topic which tell you what 0x80000003 + KERNELBASE.dll possible means.

Ok, so I tried this time to lock my fps to 30 via Rivatuner and see if anything changes. Made a long haul during the night and…same thing. I can’t precise how many hours later the issue occurred but I woke up before TOD and it was like this, but I can ensure that for the first 3 hours of flight (of a 8:30 flight) it was everything normal.

This time I had DEV mod enabled to check details on where is the issue despite the FPS being very low. 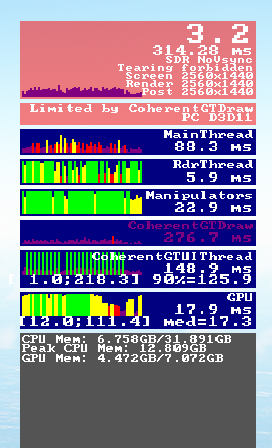 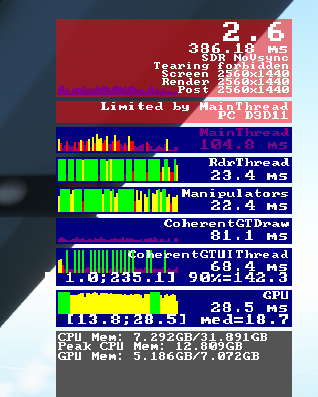 As you can see, this CoherentGTDraw was the one the literally died and it was on red all the time. Mainthread also took a big hit, but most of the time was the Coherent that was highlighting in red.

I tried to clear my standby memory using that procedure shared a few posts ago, no luck at all.

Edit: Also, this time I had my rolling cache disabled. So apparently has nothing to do with that either.

So yeah, I’m pretty disappointed because I LOVE long hauls and I can’t do them anymore. We need to find what is causing this ASAP.

because I LOVE long hauls … I woke up before TOD

that’s what I allways not understand. User LOVE to let your PC run while they lie in bed and have sweet dreams, and we discuss about a issue ? But anyway…

So you think FBW or Volanta are at fault here?

I really don’t care if you understand or not how others have fun, is none of your business and definitely has nothing to do with with issue whether happen or not. How about you quit your irony and ask something useful instead, such as which mods I was using or the route that I was doing?

The goal here is to share different scenarios on how this is happening and that’s all. I’m sharing things that may help others to pinpoint the issue, and most important, to show the devs what was my pc usage during the issue.

I’ll gladly answer any useful question to help in this issue. Such a shame to see people here pointing fingers without even knowing that IRL pilots do take naps on long hauls.

So you think FBW or Volanta are at fault here?

its only guesses… I just tried to reprodcue the issue a few times, but I can’t. So may be one of these two differences to my “system” can cause that , or not. At least it is a difference

How about you quit your irony and ask something useful instead,

well, please check former posts. Then you may find out that we mentioned already that it would best that users posts the situation in which this happen ( airplane, route, parallel applications, etc ) so that other users can try to reproduce the same decrease in fps ( or just not ) . So, all the questions are already written.

You “shared” that you done a long flight, going to bed, woke up and see bad fps. What should we do with this info ? What you think might a developer in the world can do with this info ?
And you still not answered the question: which route, which installed mods, which airplane, and on…

EDIT: and I forgot… and yes, you are right. I must not understand that users use these flight-simulator while they sleep, but I couldn’t resist to write a sentence about.

I only started getting this issue of degraded performance over a flight in the last 4 or 5 days. I first tried volanta 5 days ago…took it out of my community folder last night and left a flight going for 5 hours and it was still at 60fps. Without fail with Volanta on it drops over the first hour of the flight from 60 to the mid 20s then teens, then slide show. This was after I’d tried everything in this thread, including a fresh install. Currently just running with FBW Exp and Navigraph sim connect.