At what timestamp in the Q&A are they talking about it?

Okay I found it in the stream.

Some quotes: “it takes a lot of time to reproduce the issue” and they are “stuggling to try to reprodue that”. So imho that does not make it entirely clear wheater the are able to trigger the bug but not pin it to a set of circumstances or if they are not able to reproduce it at all (and is probably also the reason why conflicting statements about this has been made by other posters further up about them being able to reproduce it or not).

Another interesting thing that Jorg Neumann says at 1h 15m (not directly in the context of the long-haul performance issues) is that they have “nearly 50 testers NOW”. The way he words it makes it very likely that this means the number of testers has been increased recently, which is good news.

So I think bottom line is that we have to wait for SU9 but we can help them with systematic testing (which is difficult oviously since as someon mentioned above, no one who does not have the issue is willing to partake (can’t blame them on that obviously, but still makes it harder)).

Oh and another thing from the stream that is good news: they seem to be making good progress on directX12.

Official and native DirectX12 support would be great news for performance (current directX12 is a drop in replacement of 11).

Why native DirectX12 could be nice:

an easy way to see how many experienced pilots have this problem is to look at the log books and see how many failed flights (take off but no landing) after two hours or more.

Thank you:)
Ah ok thought so, was just checking that it wasn’t simply ‘fancy displays’.
So I assume you are not constrained by the sim then if its runs outside of the sim, you have working terrain radar and weather radar showing.

This isn’t just related to just flights, we have it when working in devmode/sdk as well. We can get it happening a lot sooner at around 20-40mins. I have forwarded a video on to the dev team with diagnostics showing the issue and the engine swapping in and out of video memory strangely. EG dumping nearly 8Gb of video memory and filling the pipe again when the problem really gets going.
This is a high vertices count airport and takes about 30mins to drop down the FPS. Exit out to the main menu then load back into the sim and it will reset

Seems it is something to do with hardware, driver types (EG it doesn’t affect us all), and the way the game handles loading things in and out of video memory or that it that process is being tied up by something else that is starting to take too long and it’s skipping an interrupt call in the loop.
All a bit of educated guesswork on my part but it’s interesting what the video memory metric and the fight between CPU/GPU and whatever is growing linearly causing this issue.

There are dozens of people who claim they do not have issue, but there’s not a single screen comparsion with same FPS after flying from EGLL to LKPR and then respawning on LKPR for example. Try this route with an airliner, show us your FPS after that flight…

I tried this route using the WT CJ4, not quite an airliner… The FPS was okay from takeoff, appropriate for EGLL. I had a major problem when I popped out one of the glass screens. FPS quickly deteriorated to 5 FPS and even lower. Continuing was impossible. I don’t know if this is the same problem being discussed here or a separate problem discussed elsewhere. 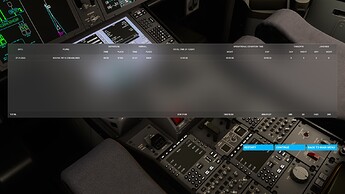 I have just come back to MSFS after a while and in the hope they had addressed one of the biggest issues this game is suffering from, the FPS drop on long haul flights.
I’m amazed to see that it’s not been addressed at all.
How does a Company like Asobo completely ignore an issue like this, in preference to dealing with clouds and night lighting. I find it incredible.
Its not an imaginary problem. It’s not linked to having a sub standard PC ( I have an RTX 3080 , Ryzen 9 chip 64gb Ram ) it’s a software issue, plain and simple.
So once again I will leave it 3 or 4 months and come back and hopefully this company will have sorted this mess of a game out . I mean it’s only been over 2 years now,but sure I let’s have better clouds and pointless addons and ignore that elephant in the room . 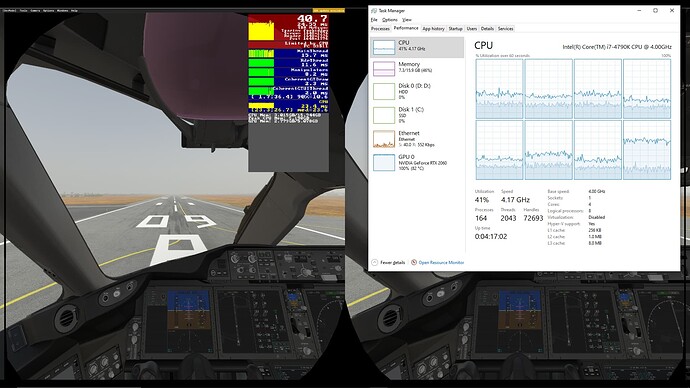 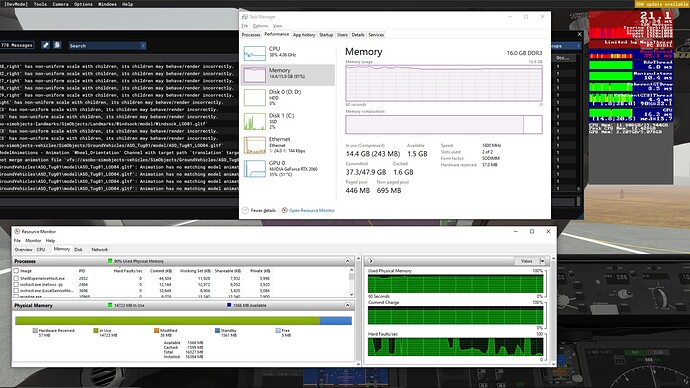 Again, something is happening with CoherentGT, CPU and memory that keeps increasing for no logic reason. Repro rate is no doubt 100% in my case. 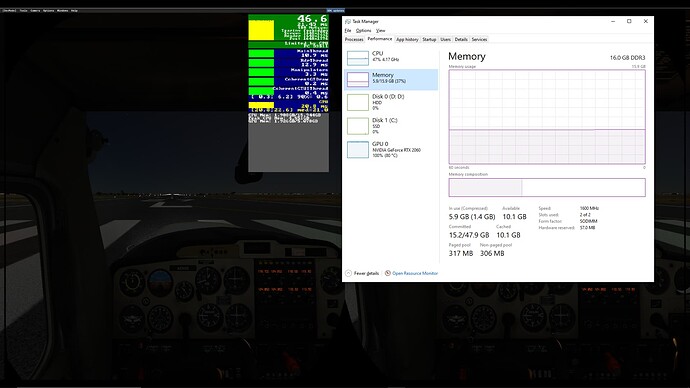 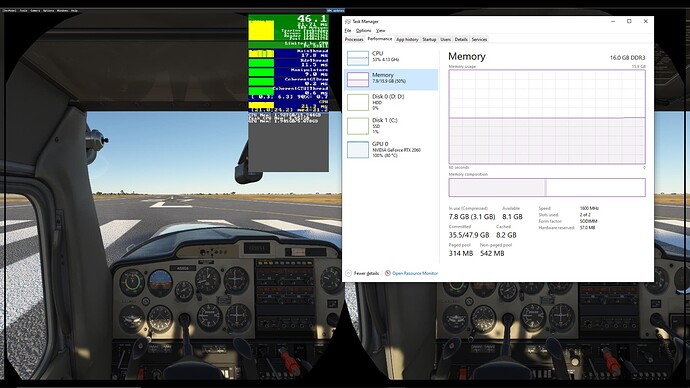 As we can see, even with the C152, there is a memory increase for no apparent reason, and although the performance has not dropped yet, the mainthread is starting to slow down. I think that if I had let it run longer, the mainthread would eventually have been slow enough to notice an FPS drop.

Yesterday I did my usual flight with the A320 fbw and I had a complete flight (4.5 hrs) with no fpm loss whatever. 55+ fpm start to finish. I was so happy I did another flight of 2.4 hrs last night and again, full performance from start to finish. First time having full performance since I did a sim re-install a few weeks back and I was excited as I thought maybe there had been a fix of some sort quietly done remotely.

Anyway, I have the same 4.5 hrs flight running this morning and sadly it’s back to square one, gone from nearly 60 fpm to 4-9 fpm after 2 hrs approx. My joy was short-lived, lol!

Makes me suspect it’s not my hardware as it performed so beautifully all day yesterday without any changes to settings whatever. Ah well, it was great while it lasted.

Seems to be the Manipulators thread again, which is what I have seen when having this issue. This could be a badly coded instrument, possibly an issue with WASM or XML instruments? 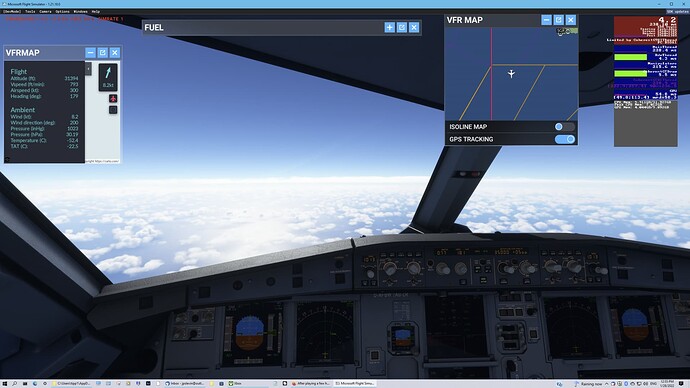 As we can see, even with the C152, there is a memory increase for no apparent reason, and although the performance has not dropped yet, the mainthread is starting to slow down.

It’s possible that the more complicated the aircraft the quicker this sets in.

Every testing flight i do eventually ends up with bad performance but it happens at different flight times.

Asobo wanted “more details” on this issue (even though there’s literally 1500 posts in this topic and there are dozens of other topics, even on other forums). But okay, let’s do that again - 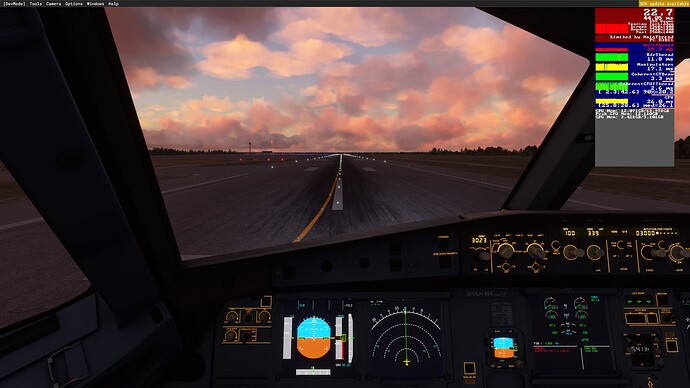 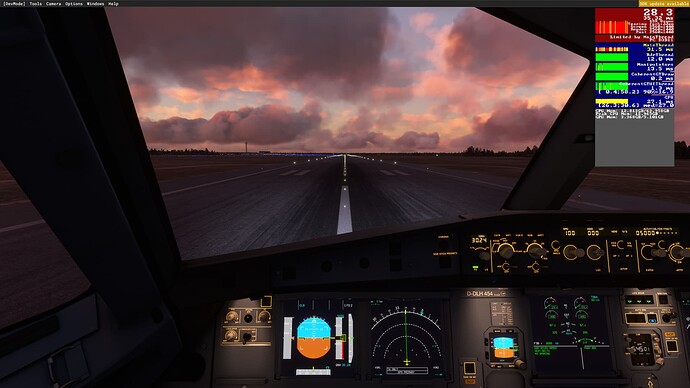 maybe the key to getting this fixed (and many other issues) is a more powerful built in FPS tool, that can delve deeper into the cause of the number given in the current implementation.

A profiling aspect, that the user can use.

Yes, Asobo have all the development tools, but may well not see the issues, when in their complex dev mode, (possibly even running a different debug build ), to the release and protected version be are seeing the issues in.

If Asobo cannot reproduce it, are they even using the same setups and software , and Internet connections, that we, the uers are using when we expereince these slow downs.