Correct. No models yet…

As far as I understand it AIM uses real-world published airline schedules to inject airliners and routes. Small GA traffic does not generally fly according to any published schedules and their flight plans are not readily available in a convenient database.

Therefore displaying random GA traffic is not a function of AIM at the moment afaik.

Therefore displaying random GA traffic is not a function of AIM at the moment afaik.

correct. We are thinking about an way to generate realistiv VFR routes (with waypoints) for GA traffic, but so far this has been only an idea. We might want to much… Simple A->B routes are unrealistic in our opinio so we need a algorith that can create routes based on Landmarks (rivers, buildings, streets) xD

Is there a way I could link a model to these flights plans.
For example if I could link the St Barth commuter to the default caravan and the winair to the BN Islander

If your talking about me pointing out the Atc issue that is no way shape or form on aig. I know it’s Asobo coding, and no one said anything negative towards aig.

There is way to handle ai aircrafts reversethrutst ratio (or disable it) and minimun throttle. With those two adjustments you can assign aircraft to brake very slow, allmost to the end of the 10.000ft runway. But main problem is exit behaviour, still aircraft doesent exit first exit availeble and it could mis two exits with taxi speed of 15kts. But with those adjustments, AI aircrafts can slow way slower. But in small runways, they could hit the end mark. So it is not good solution.

Understandable, but why not start with those simple A to B routes first? For us GA flyers who flyes from smaler Airports and GA Airfields, AIG has little to no use because those places are empty for now.

I think there is even an addon for it (might be on flightsim.to).

The other actual issue at the moment: There are not many (if not actual o) dedicated AI models for smaller GA traffic at the moment…

As far as I am concerned GA traffic is a complete distraction from the point of AIM, which presents the operation and appearance of real world commercial airline traffic that uses the world’s major airports in a realistic way. In this respect AIGTC is achieving that goal magnificently and if Asobo get their act together maybe MSFS live traffic combined with AIM could also.

I don’t want to see random and inappropriate fantasy GA traffic cluttering up the parking spots and interfering with real-world airliners taking off and landing at airports, this would negatively impact realism.

If this ever becomes a feature I hope it will come with an ON/OFF option.

For people who are more interested in GA flying at small airfields they can of course turn on multi-player mode and join the madness.

I hope AIG maintain their current focus and attention.

Great because that would be inappropriate. We are all looking to help the dev helping us in the end.

I think there is even an addon for it (might be on flightsim.to).

Indeed there is (Offline AI Traffic - Stock Traffic BGL Fix » Microsoft Flight Simulator)… Using it for quite a while together with AIG, works great and no issues… 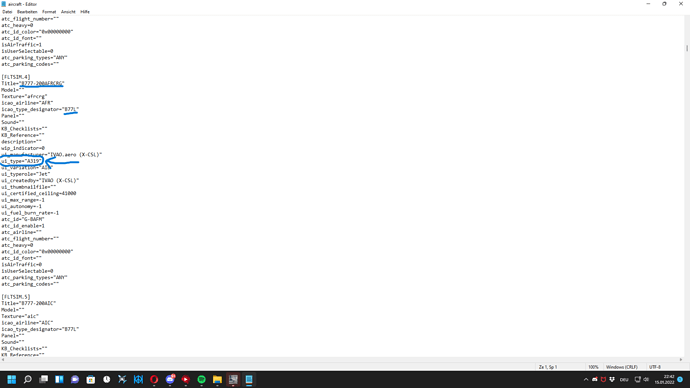 It should be the same as the rest of the liveries in this file.
It shouldn’t hurt to change it, but I would keep a copy, just in case.

ok…so it should show up as a B777 ingame? This file is from the “ivao x-csl” folder which I am using for models and liveries for other aircrafts in the sim.

I don’t want to see random and inappropriate fantasy GA traffic cluttering up the parking spots and interfering with real-world airliners taking off and landing at airports, this would negatively impact realism.

If we do this “random” GA traffic, we will use our internal resources/data to make sure this random AI traffic does not interfear with commercial AI, so no C172 in LAX

The model used by ATC is defined in the [GENERAL] section and not in the [FLTSIM]. The line “ui_type” has no effect on AI aircraft.

would there be an ‘‘easy’’ way of telling the program that no GA plane should be at an airport with more than 5000’ (or restricted to 5000’ or less) for exemple?

just wait a little bit next to this aircraft and it will load correctly!