Great wok @Kaiii3. It’s great to hear that you’ve had some fruitful conversations with MS/ASOBO and I’m hopeful that they don’t change the rules (break the AI system) on you!

Noting Q4 for a full release, when would you anticipate the option for a beta (early access) type release?

Great to hear. This will finish the game. Much needed immersion. Thanks in advance for yout hard work!

Very curious about this…care to enlighten us a bit more?

It is based on an external tool AIG i(Traffic Controller) s already alpha testing ion P3D since this year incl. a new fileformat that will replace the old BGL files. The new format is already published, but not many other tools have implemented it yet for installation.
The tool itself is not yet fully converted to MSFS, so it can not be released for MSFS in the near future, the plan was a release combined with AIM.

If it will be the only way to get offline AI working correctly I mioght to readjust the roadmaps for all our tools, to prepar an earlier release - this would also require that at least on other external tool is able to handle this new format as well, since AIM will not be ready by then,

I’m hopeful that they don’t change the rules (break the AI system) on you!

And if they breake stuff again, I am sure the community will tell them ASAP to get it fixed again^^

Noting Q4 for a full release, when would you anticipate the option for a beta (early access) type release?

when it is ready

as long as an update of AIM might require a full reinstall of OCI i will not go for an public beta, because the ammount of support would be way to high. Public Beta will be more or less to cross check if AIM will run on different Systems and how different systems handle AI stuff within the Sim.
I also need to make sure that as long as we use some sorts of workarounds for different stuff, that I can revert them back if ASOBO fixes/changes some stuff. Users of OCI for P3D know, that we have a powerfull selfrepair feature to adjust stuff automatically, but even this has its limits.
There is also on major other factor: The SImulator itself… if alpha testing shows us that the Sim itself is unable to handle that ammount of AI (logic or performance), we might need to postpone the release, till this is fixed.
AIG stand for quality AI Traffic, and as long as our product in combination with the SIm can not reach this level of quality AIM will not get public.

Thanks for the in depth and detailed update @Kaiii3. I (and I’m sure most people) appreciate the efforts that you and your team are going to to bring to life a part of the sim that was so clearly let down by Microsoft.

Appreciate the honest and regular updates - please keep us in the loop!

no problem - It is only fair to tell you guys when we hit some trouble spots that might have an impact on this project.

Btw: The workaround will be for AIG AI Traffic only for the time beeing (I still hope that is not needed) - It is not possible to develop a full standalone tool for 3rd party users/developer to jump on this workaround.
Over the long period of internal testing this temp. workaround is mostlikely to become the new AIG standard for AI flightplans, since it is far supperior over the old BGL files.

Excellent work. Hoping to see it, when is ready.

short update on the A32X and B737 from FAIB. Since a native glTF conversion is not on the high priority list of the conversion team at the moment, we have added an repaint converter to OCI that will make sure the repaints will work correct within MSFS.
The results is not the 100% solution but more or less close to 95%, so you can enjoy them now at night as well. The normal repaints have caused a massive bright night texture.

Better than default models and liveries though!! I think most people would be comfortable with this approach noting that when the updated models are available they will be used…

Did anything in SU4 help or hinder you guys in your efforts?

since our temporary workaround will actual be our new standard I have not checked the base SU4 yet, but the workaround seems to be working. There are still some problems, but not sure yet if they are related to SU4

Unfortunately, SU4 has not solved the problem. Liveries are still chosen randomly.
When and if possible, it would be great to know more about your workaround in order to use our homemade offline traffic, while waiting for you to release your great OCI. Thanks

our workaround is based on the AIGFP format in combination with AIG Traffic Controller. Both are actual still under development (alpha-phase in P3D is completed).
So it is currently impossible to publish it to the public, but this “bug” could actual speed things up with AIGFP/AIGTC since it is now the default setup for our alpha testers. So we can test both tools (AIm and TC) at the same time.

for those not in the Q&A-Chat: Private ALPHA has started for online and offline AI

Yeah you guys got a few mentions in the Q&A from what I see…good work!

for those not in the Q&A-Chat: Private ALPHA has started for online and offline AI

Can’t wait to have offline traffic again…it’s so desolating, departing and arriving in deserted airports

Hi, I just discovered your existence and I have some questions.

Applied, the problem you currently have with “online” is while an individual flight may or may not match, the current system doesn’t support ground traffic. By this I mean, you will not get true to life parked airplanes using the current system.

On of the things I personally love about what AIG is offering is a more accurate “real world”-based traffic (including ground traffic) because the flight plans indicate where planes are departing from even before they taxi and take off. In my view, flying into/out of any airport and seeing airlines and airplanes that would never be there, really breaks the immersion.

Here is a shot from my KATL - note, none of the planes in the foreground would normally be found at KATL 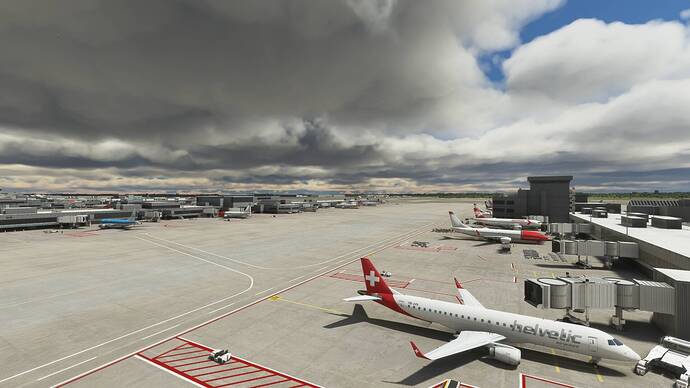 An to clarify, the AIG system worked previously but was broken in the patch before SU4 (which is what AIG is working to address).

Eeeh like i said …. Online is good enough for me . I do NOT have a problem

Therefore i accept low traffic on airports since the majority of the flight i am up in the air anyway. Except for a few mins taxi.

When i test near my hometown and EHAM with Flightradar24…. Real traffic is almost spot on ( except 10 min delay )

I do not care on overcrowded EHAM … killing my framerate … but some parked KLM planes would be nice ( already are there with real traffic currently).

This afternoon there was an easyjet landing at EGPH in front of me …. And taxied to the gate … a default wide body though. So would be nice if replaced.

Thats all I need and all i am asking

Imagine the KLM timetable populated … but a flight cancelled. Would still fly in the sim right ?? Hence a full KLM timetable of “fake” traffic during covid is super unrealistic since 90% was cancelled ( and only the 10% showed as real traffic correctly👍 )

To each his own. In the past AIG has updated their flight plans typically at least twice a year as I recall seeing summer and winter schedules.