Sim traffic working fine after I deleted the cvt folder and let it recreate it.

AIG TC works OK, the app is quite unstable though and frequently closes silently. Same AI issues are still there though, slow taxi on runways, flying slow and spawning at your current altitude which means lots of low flying planes on the ground and when you’re cruising expect to dodge several aircraft flying at exactly your cruise altitude.

Sim live traffic is back to not taking off unless you wait for a hour or so and even then its very spotty. I created a bug report about this after watching traffic at multiple airports for hours.

Even AIG traffic sometimes get stuck departing the terminal, I’ve seen pushback requests granted and the plane sitting there, maybe due to no pushback tugs being spawned?

maybe due to no pushback tugs being spawned?

AIG TC works OK, the app is quite unstable though and frequently closes silently

Try running it in Windows 8 Compatability mode. I haven’t had TC crash in months since doing that. Though it doesn’t seem to work for everyone.

Very interesting, I’ll need to look again, was parked at YSSY and WSSS for ages waiting for planes to leave, they eventually did but took a long time after spawning.

Has anyone else experienced AIG planes on top of each other? This is the 2nd time in a row I am experiencing this. AIG TC worked for 3-4 hours without CTD. But on the return flight back to the original airport all airplanes where on top of each other at the center of the airport. See below! SU10 beta. 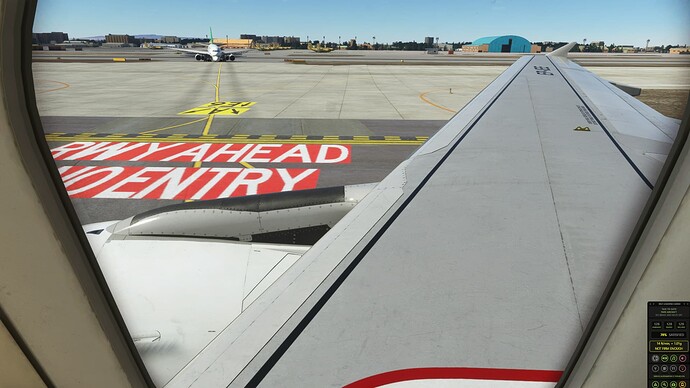 Yeah, I had zero issues with SU9.

As it turns out, deleting the relevant folders workaround, seemed to take for a spell, but I’m back to CTD’s again.

I planned a flight from EDDF to EHAM, and barely start taxiing to 07C for takeoff, before it crashes. And that was three attempts, and deleting the CVT folder on the last attempt. So there’s that.

I’ll wait for maybe a few more days to see if Asobo push another update to the beta. If not, I’m going back to SU9. Thank God for backups.

run like every other flight, fire vatsim (in my case) using AIG traffic and corresponding .vmr

The issues with offline AI traffic (not live traffic) not spawning at proper altitudes and not flying fastet than 250knots happens to everyone.

You probably wouldn’t notice unless you were using a map program to see the aircraft.

Switching back to SU9 will just stop the crashing, it won’t fix any of the other issues I mentioned.

Basically my sim crashes as long as I have AIG in it. Without any traffic I can fly whatever and wherever. I have been battling the memory breakpoint issue in sim update 9 which seems to be finally resolved in sim update 10. So i feel there is a compromise if i go back to update 9 or stay at update 10 as well.

I just wonder why they stop supporting MDLX files what’s the reason behind that?

I can confirm, I flew from EHLE - EGKK with the Cessna 310 without AIG and I had 0 issues. As soon as I start vatsim ( which uses AIG) CTD without excuses… (I’m on SU10 beta)

This is not a solution! MSFS still crashes on bigger airports!

the only solution at the moment: Wait for the next Beta Update for MSFS

May I ask if you have any insight if it will be fixed?

planed for the next Beta update, at least based on the news from Asobo.

For me is work with vatsim, I not use the TC controller just the models and vatsim.
I have removed the AIG…OCI beta, delete the cvt folder, start the MSFS, closed and move the folder OCI back into community. After it’s work for me.
Again I not use TC.

When ist this Beta Update sheduled?

no data provided so far by Asobo or MS

Going by their normal update schedule for big updates I would predict Tuesday; 1500-1600z to be more exact.