Airbus Industrie A319 by LVFR

Can you test the IAE version and see if it has black screens for you?

Confirmed XSX here. It appears as there is no power to the avionics bus

Not an Airliner guy by any means, but holy moly, I will certainly be grabbing this one just for the Executive VIP variant.

I don’t have the aircraft yet, so I can’t test it at the moment. But I’m interested in it. If the stars align (e.g. I can afford it), I will buy and look at it.

It’s really fantastic and immersive. Just hope they fix the avionics on the IAE version as I really like that version

Can’t confirm on Xbox. I’m on a Air Serbia flight, which I believe has that engine configuration.

I flew a Eurowings with an IAE engine. The flight itself was smooth but I noticed a lot of frame drop. I don’t know if it’s related to the aircraft.

Got this today. Really nice first impressions but a couple of quirks that need to be addressed not sure if anyone has solved these?

On climb out the AP and At seems to insist on sticking to VR (about 140kts) for way longer than the default neo. (I do program the perf page on the FMC correctly) I have had to disengage AT and go back to TOGA to stop the A/C slowing and dropping. It eventually gets the message and aims for a 250kts for the climb out.

Climb performance beyond FL200 is like the original default NEO before it was patched. Perhaps the flight model is based on that?

And on low descent with flaps 2 or 3 I have been getting some significant overspending and have had to gram the spoilers to arrest it. Not sure if this is a prototypical A319 behaviour?

And finally the Marshalls at the gate guide you far to far forward so the jetway has to contort itself to reach the door!

All workable nighles though, overall a great start.

How is this plane working for Xbox users? I get lots of CTD’s. Not during flights, but mainly when at the gate starting up or after a flight taxiing to the gate.

Confirmed, same issue on my PC with the IAE version.

I’ve just seen this video and it’s enough to make me avoid this aircraft. It looks like the autopilot system is completely broken. Has anyone else encountered the same? 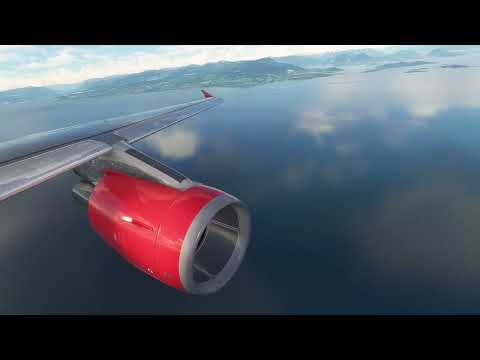 Everything in the cockpit is pretty much the exact same as the Neo, including the AP functionality. I have no Idea how that happened in the video, looks like it was done on purpose to me, never have I experienced anything remotely like that with anything in sim… The IAE version has blacked out Avionics for me on Series X and @HansOffHelmut is onto something I think about what he states. Should be a decent patch away from fixing all the current issues.

Horrendous and that’s why I will never fly anything like this unless it is from a study level dev. The default AP in most sims is just deranged and out to spoil your fun, I dont think it is the plane but more the sim. The default AP is a one size fits all, unless it has some tweaks, how is it to deal with all the different types of flight automation needed from FlybyWire to AP off & Auto throttle on, I know it can be configured but not nearly enough as something like the A319/737 etc would need, to me it is just a waste of money all round, if you just want to fly, fly a GA they work. I know the choice is limited on XBOX at the moment however.

I am not having a go at the plane or the sim or anything, I am just saying it is really hard to not get these sorts of issues using the default sim systems.

I also wish FBW could somehow be integrated into these planes, with the ability to account for the different characteristics of the A319 and A321 but I guess that’s a ton of work too.

I can’t imagine flying for 2 hours only to have this happen.

The default AP is perfectly fine in default airliners (well, apart from them often losing the approach but that’s a separate bug), they never do anything like this, that’s why this video is puzzling. I found it linked on the LVFR forums. It seems that when the user lowers the flaps the AP goes absolutely haywire.

Also, the plane having to push the nose down 2 degrees to hold the altitude is completely unrealistic and unacceptable (you can see it from the beginning of the video, the nose points towards the ground on the PFD while holding alt). What I suspect is that the AP works as it should but there might be something wrong with the aerodynamics of the plane, at least in certain circumstances.

Either that, or the CG in this case was set to some extreme position.

I will briefly summarize my experience with this aircraft with the few flights made so far (including flying it now):

Please let the Dev’s at LVFR know about these details as we’re certain that they’ll rush to correct them for the next Up Date ! This is a good and honest offering and despite the missing funcitionality surely gives Flightsimmers what is wanted in a well modelled A319.