Is Asobo giving the third party developers everything they need to bring study level aircraft to this sim?

Voted. I have the same question for developers like FSLabs, A2A Simulations, Milviz, Simcoders etc.

Last i heard from PMDG they said they have everything they need, so i expect it’s a matter of time. And I have been watching A2A’s forums but I have yet to hear if they’re working with Asobo or not. They also seem to be hopeful about delivering the Comanche for FS2020, but news has been hard to come by.

If PMDG has everything they need, they’re getting stuff we don’t have… (HUD’s, Mach speed issues, multi-threading, among others…)

This was from a post by PMDG on March 20th. 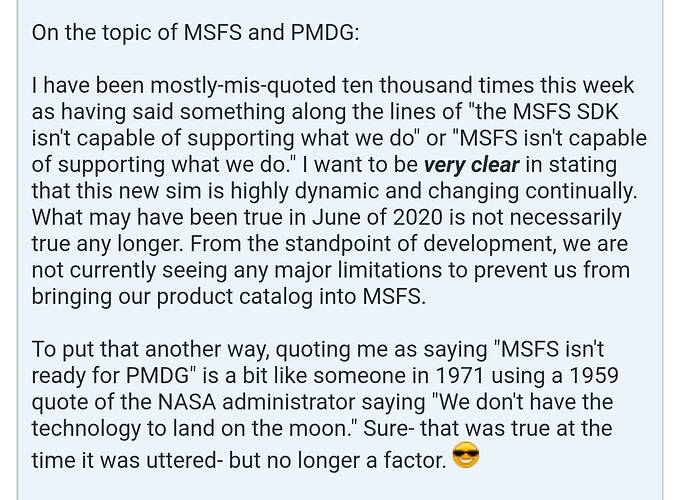 I’ll be calling Robert then….

There was a statement last year that co-locating half of the team to France went up in smoke due to covid. I think it was from PMDG, if I remember correctly.

That is the level of commitment both involved parties have.

Well… can you blame them? PMDG want to make a profit, just like any other third party developer out there, and Microsobo want to get PMDG on their side to give legitimacy to their simulator as a viable replacement for P3D. So it’s all to be expected, really. I wonder if they have the same thing going with A2A, but i somehow doubt it. Haven’t heard anything to indicate that.

But it’s a shame that there aren’t more third party developers receiving the same attention from Microsobo. At the very least, they should at least get some form of acknowledgement from them, rather than radio silence.

I’ll be calling Robert then….

Don’t get me wrong… we talk to Asobo/MS regularly… but… we don’t always get what we need/want….

Mathijs Kok has closer relationship with Asobo than any other developer. Buy him a beer and he will give you all the information you need

Heck Microsoft made a trailer for Aerosoft’s CRJ. I wouldn’t be surprised if Mathijs gets engaged with Jorg next month. Just kidding…