I put together a quick video of a couple of take-offs, and landings. It’s not clear to see here, but there is around a 5kt crosswind, increasing to around 12kts. The crosswind component does not exist when the plane is stationary, and steadily builds as you accelerate. This requires you to put more rudder in as you accelerate. If you don’t compensate for that it can lead to a lurch on rotation. In planes like the Arrow there is the additional complication of the default CoG. If you don’t trim up you get this violent head shake as you approach rotation speed.

Both of these can be overcome. Hopefully Asobo will overhaul the ground physics at some point in the future. 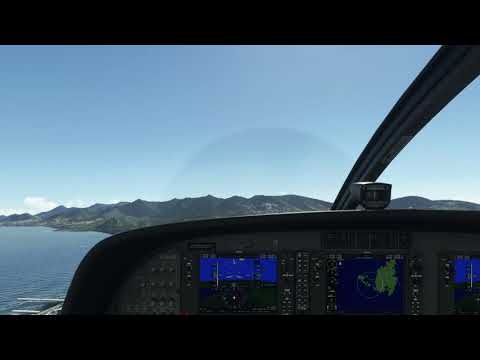 I find that the crosswind effect is overdone in the sim. Even a light crosswind behaves like a gale. The workaround is to swallow one’s pride and enable takeoff assistance which doesn’t stop it, merely dampens it, and only works on the takeoff roll.
Just be ready at rotation lol.

I wasn’t using any assists. The opposite problem comes in to play when landing. As the crosswind component reduces as you slow down, my tendency is to keep the same amount of rudder input, but this leads to overcompensating away from the direction of crosswind. Not by much but it is noticeable, but again practise will assist with this.

The trouble is we are learning to fly the sim, not the plane, if you see what I mean.

I am NOT a real life pilot but the planes in this sim do indeed some weird things. I think most people here can agree that certain forces are overblown and lead to very strange behavior.

However, it may also be that Asobo simulates physics that do occur in real life and that are not simulated in other sims. There may just be an issue with mass being too small and too much force as MSFS has a tendency to grossly exagerate things (eg icing, lighting).

One of those effects I mean are the spinning forces on an airframe. There is an old German movie from 1964 (Flug in Gefahr) in which a pilot who has only flown P-47s is forced to land a DC-6. Interestingly while he succeeds the plane aquaplanes and spins 360 degrees similar to what you may see in MSFS. The same happened when a UK pensioner without any experience had to land a Cessna. He landed and walked away but the plane also spun and veired off the runway, because there was no way he could prepare for those motions once he applied the brakes for the first time in his life.

A moving object that wants to turn around itself is extremely dangerous to control and needs complex input to stabilize. Astronauts in orbit are more aware of those problems (eg think of the incident with the Gemini-Agena). But the ground we are not used to turning forces because they are normally balanced out by friction and it leads people to crash their cars in winter or when they jerk their steering wheel too much.

What I am saying is that when a plane wants to spin and loses traction it isn’t enough to just move the control surfaces a bit here and there to get rid of the motion. This may be overblown but it is in principle reasonable to expect when we dont pay enough attention to forces and speeds. What is needed here is much more balancing out of the realism of those effects.

If you honestly believe the sim reacts properly on the ground then I’d love to see a video clip of you tracking centerline from dead stop to rotation.

I’m not disgreeing with you or questioning your expertise, but do you happen to fly DCS? If yes, descrive your experience taking off and landing a Spitfire or Bf-109. I find them impossible to control and gave up for good. Even with the issues MSFS is extremely forgiving compared to that. X-Plane is even more forgiving so much that it feels unrealistic, and it also does not have those quirks of veering off the runway. The question is wether MSFS is unrealistic or X-Plane not modelling motions that lead a plane to leave the center line? Or is actually DCS the only one that does it right?

Ground physics should not be the priority in my opinion. Let’s fix some ctds first.

Listen I get people train for their license and whatnot with the same in addition to it being played as a game. But it’s existed for decades and has never been better. How did people rain for and get their PPL on MSFS ‘95 without physics being perfect? What did we do before the most realistic flightsim of all time came out last August?

I don’t understand the constant demand for 100% perfection on every real-world physical aspect.

I don’t understand the constant demand for 100% perfection on every real-world physical aspect.

It’s a flight simulator. It should simulate flight. If it’s not even remotely accurate, what is the point?

It’s a flight simulator. It should simulate flight. If it’s not even remotely accurate, what is the point?

Because nobody will ever be happy if that’s all you want and it must simulate physical flight with 100% accuracy. It’s not an airliner Boeing or Airbus built machine. You can’t tell me, again, that all the old versions of MSFS with nonexistent physics were good enough to train pilots while this one, light years ahead of any other flightsim, is not.

I’m not saying constant improvement isn’t good, but all the demands for perfection and that fact that it isn’t already perfect are getting silly in my opinion.

I’m not sure old (say pre-FSX times) flight sims were good enough to train pilots in flying physics; I doubt they were. They could teach systems, navigation and so on, but given the “on a rail” comments heard about FSX/P3D I doubt they were overly useful for learning the details of actually flying a plane.

This thread isn’t really about a minor detail though, IMO. I’ve had (and even seen RL pilots make) takeoffs that would’ve led to incidents reports where the sim simply didn’t work in a remotely realistic manner.

Ground handling behaviour does not feel right with these light aircrafts. They are way too jumpy/twitchy. Something over sensitive stuff happening on ground/take-off/landing behaviour.

I’m also a PPL pilot and a flight simmer over 35 years of grinding so far. Compared to IRL planes I fly, the sim counterparts are very very twitchy (even fine tuning any control curves on the control settings).

This thread isn’t really about a minor detail though, IMO. I’ve had (and even seen RL pilots make) takeoffs that would’ve led to incidents reports where the sim simply didn’t work in a remotely realistic manner.

I take your point. But I think that most of the population of the sim would be frustrated if every interaction were also 100% real and slowed down their simming flow. Not saying it isn’t used for simulation training, but shouldn’t be the exclusive tool used and imperfection should be expected, really.

Anyway, just my opinion. I’m not against it, I just think it’s unrealistic to ask for realism across every aspect of physics. Put me in a Boeing 787 Simulator machine used to train commercial pilots, and that better be perfect. There’s a difference, though.

If you think I said the ground handling is correct, then you didn’t read what I said.

This is a beautiful sim and I want to fly it badly. It would be great to keep my skills sharp for my real flying but unfortunately it’s still a million miles away from anything realistic.

Thanks for writing this, so I can use auto-rudder and it will feel relatively realistic? No slightest breeze is blowing the Cessna off the runway in real-life? Good to know!

But the strange truth is that I have never wondered how an aircraft feels like while taxiing and rolling… for me taxiing it feels very strange and either total sluggish or over-twitchy depending on the rolling speed in every simulator (no matter if it´s DCS or Flight Sim 20) that´s why I always thought planes behave like this on the ground.

How could this not be a priority?

Because that’s not the top priority of the community? I don’t remember seeing this being a top voted bug fix / feature request. Correct me if I’m wrong. But most people are concerned with stutter, popping, photogrammetry coverage, building/scenery bugs, systems bugs etc. Every once in a while you might get an odd “GIVE US ADVERSE YAW” post but that’s few and far between.

After rereading your post I realize I over generalized what you were saying. Cheers.

Yeah, with no, or nearly no wind, its mostly just hypersensitive, which I have dialed out with rudder sensitivity.

Add any amount of noticible wind and the tire friction doesn’t work correctly (laterally). After a lot of tinkering and testing different scenarios I’m confident this is the problem. Lateral friction for the tires just needs to be increased.

Try it, set to 0 wind, go do a run, you’ll see its just the over sensitivity of the steering. Add a 10 knot wind and it all goes pear-shaped. I know 0 wind is not common real world, but eliminating variables is the first trick to troubleshooting these things.

Takeoff and landing are critical parts of a flight and the most dangerous too. Every pilot can tell how attention is focused during these few seconds and what is important and what not. Flying around in 2000 feet above a nice area isn’t difficult, takeoff and landing are. And that’s what’s important to be correct. We could argue about CTDs now but below the line it’s interesting that CTDs happen occasionally to some people while others don’t have the problem. So it’s not necessarily a global problem with the sim. The flight dynamic issues affect everyone: Clear problem with the sim. I hope you get my hint. ^^

Didn’t the devs talk about this in some detail in a recent Q&A, saying they are working on comepletely remodelling how the aircraft contacts the ground. Currently it is very simplistic. The are working on modelling tyre flex, suspension flex, and many other parameters to significantly improve this very area.

No idea of the release date of any of this, but I belive it is not being ignored.

I asked that question at a previous dev. Q&A. They stated the code was essentially improved FSX code, but that it needed more work. They didn’t state that they were planning to any time soon, only that it needed redoing.

Why did this post get flagged?
You guys just need to stop…