Hi all folks, first post, please be kind. I am SHR Modding. got a few questions about the sdk, sound mods and the like. I’m a sound developer for Reiza Studios (the dev behind Automobilista 1 and 2). both of these games use the FMOD sound engine so i’ve got experience with events / sound banks, parameters etc and how they work.

i’ve been delving into the fs2020 sdk lately to see if its possible to make sound mods for planes, specifically airliners because while i agree the default sound design is pretty ■■■■ detailed and generally very well done, some of the airliner engine sounds (like startup etc) are imo lacking a tad.

the reason why i’m posting here is… i’m stuck lol. i don’t have an issue with wwise (i dont think!), or exporting pc.pck packages etc, or the sound.xml per say, i’ve sussed that bit out. i’m stuck at actually getting them to work in game once all the files are in the right place (packages and xml in sound folder, rebuilt the layout.json using a nifty tool i found on github). i can successfully disable sounds from playing in game, but not replace them.

i feel like there’s a ‘build’ process i’m not carrying out. i’m not making a new mod aircraft, just the sound. in the sdk you can load up the aircraft package of a wip aircraft (for example the sample simple aircraft) and then place sound files in the package sources (sound) folder and then build it in game, and it’ll output the files into the correct folder structure. i’m missing this kind of functionality for my project files (currently just the pc.pck and the xml file)

so would i need to build a full aircraft folder structure and only include the sound files or is there another way to ‘build’ the package so the sim recognises the files?

some screens below of my events and xml. i’ve just got one (engine) event so far to test the waters. followed the video tutorials in the sdk for audio modelling and can confirm everything is set up as the sdk suggests

the only way i could get ‘something’ (meaning nothing) is by putting the sound files in the existing B78XH mod folder. no sound plays which means that the default 787 sound pc.pck is being overridden, but something is wrong which is causing mine not to be used at all

in the end i want to use the default 787.pc.pck and have an additional package with my engine sounds and some minor details like flaps etc. while i can successfully set it up this way, when i replace the relevant lines in the xml, the default sound only gets disabled, not replaced by my event.

i know its possible because flybywire did it with the a32nx before they got their own model and the 787xh is using a lot of salty’s stuff from the 747 and are now able to get by the encryption. placing my sound files in there and my pc.pck over riding the default one is a testament to it being possible 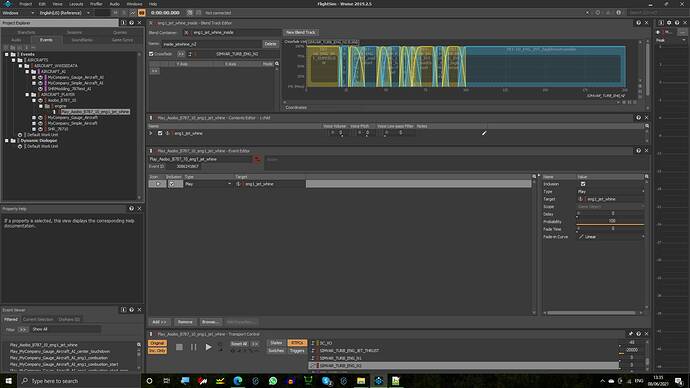 let me know if you need to see anything else
a video of what i’m aiming for is available on my yt channel (SHR Modding) cant post links here.
cooked it up in a video editor using my looped audio samples