All planes pull to the left while taxiing

THX for your Interest…

Yes it was my T. Flight Stick.

But now i have a new. You can see couple Posts before…

I try to handle that with Deadzone Settings…

One question: Did you experience a noticeable yaw effect when rotating a single turbine jet about the pitch axis at lift off ?
In flight mechanics you definitely have to take account for that torque.
But in practice ?

No. You don’t notice that. Since the direction of rotation is the same on multi engined jets, shouldn’t this effect be ‘theoretically’ noticeable as well on these aircraft?

AFAIK the only time where this can actually be noticed a tiny bit IRL is on the MiG 29 when performing a tailslide.

Can you post a Screen of your Settings.
You have also the T.16000M, right?

Would be very grateful to you…

2% deadzone on all axis and -33% sensitivity on all axis. Everything else is default.
edit: except for the throttle axis of course.

If you still need a screenshot, no problem.

No Problem Sir… no its, ok when the other settings are to default

But i have a strange behavior.

Have this only in MSFS, in DCS works fine.

That’s a strange one. I only observed this in the real A320 when I didn’t pull the sidestick perfectly straight back during the flight control check.

If it doesn’t occur in DCS it can’t be the stick.

Does this problem occur in the windows calibration?

Can you send me a screenshot of your sensitivity settings?

@JazzSam
Joystick R-Axis Z is my throttle, and I don’t usually have the dead zone set so high. I did that because I was having issues with minor bumps to the stick knocking me out of autopilot (or worse, causing me to do random circles in the sky) in the A32NX. Not sure if I need to keep it that way still, or not. I’m swamped, will try to get back here for more later. 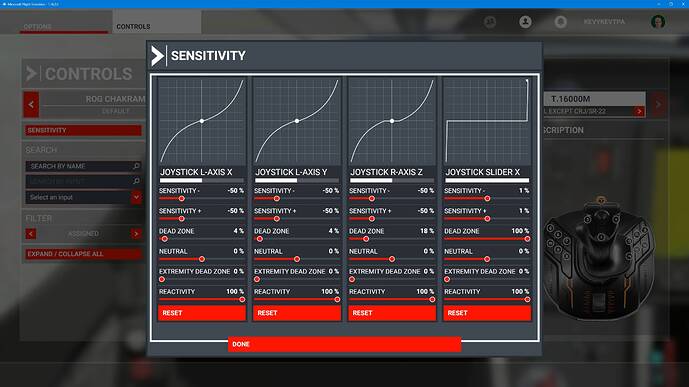 Does this problem occur in the windows calibration?

No, only in the Sim,. thats really strange…

knocking me out of autopilot

THX for your feedback & screenshot…sounds not good

You dont use the Slider as Throttle?
I use the R Axis as Side Rudder. I cant use Pedals, because of the wheelchair.

I really hope i have not the same issues with the Honeycomb, comes next week.

Maybe there’s a weird double binding with an axis. That’s the only thing I can think of.

Or the new joystick is defective…

I don’t think so, because it works smoothly in Windows under the calibration settings.

I have to unplug my Saitek panels and look again.

They have already caused problems here and there…

If it would be defective it wouldn’t work in DCS and windows.
And until now I’ve never read about this problem.

If you have multiple hardware plugged in, it’s always a good idea to unplug them and then to reconnect them one by one

If you have multiple hardware plugged in, it’s always a good idea to unplug them and then to reconnect them one by one

Absolut, today i was on the Way with the CRJ, and as i let down the Gear (Saitek Panel),
the Plane was crash to the Ground. No more Controll…the CRJ dont like the Saitek Panels ;).

I may also have to get used to the new joystick correctly.

The old one was a bit diffrent to use as the new one now. It could also be that I am not currently leading straight. So time to training…

After all, I no longer have any outliers to the left as before … that’s very positive.

THX a lot for your Tipps Sir…

It’s fine. The A32NX has been upgraded 10,000 times since the last time I had that problem, in fact, after I saw what I had my null zone set to, I made it smaller when I ran the sim. Made taxiing in a straight line much easier.

You dont use the Slider as Throttle?
I use the R Axis as Side Rudder.

I use my bravo as throttle, different axes for different aircraft. I also use the twist function on my t.16000m for my rudders. I strongly recommend that you do the same.

If you do have issues with the bravo, let me know and I’ll see if I can help. I can also print you up some parts (for a fee, naturally) of some bravo addons, like a large throttle control, or flap detents, if that sounds interesting we’ll get you in my Discord where you can see some samples and go from there…

The same goes for anyone here who might be interested, in fact, to short-circuit things, here’s the invite: https://discord.gg/PD93TSuN2G, it’ll work for anyone. Also we have a database of over 100 MSFS aircraft, and voice chatrooms for multiplayer use.

Anyway, like I said, if you need help, let me know and I’ll do as much as possible to provide it.

Thanks a lot for your clarifying answer !

Very interesting for me!
You are right with the engines , assuming all rotate in the same direction.
Stupidly I had in mind counter rotating twin propeller engines only.

That should not happen to an engineer !

But stay cool: I worked as an eye doc only. (have two degrees)

Because you mentioned side slip:
I miss the ability to do a “real” side slip in msfs, at least with the Savage.
Never the less it’ s awesome.

Nice to have met you.
Bye, Walter

AFAIK, adverse yaw etc. is still WIP. Some MSFS are slipping already ok AFAIR.
Haven’t flown the Savage Cub since quite some time. Have to try.
The real Super Cub did slip very nicely.

Nice to meet you to

Joystick R-Axis Z is my throttle

I use my bravo as throttle

I strongly recommend that you do the same. 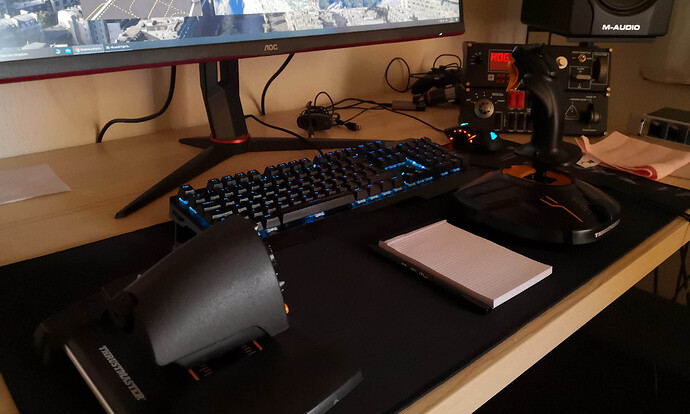 I use the R Axis as Rudder, thats Standart, and would be make it for (When you dont have Pedals).

I can also print you up some parts (for a fee, naturally) of some bravo addons

When it comes to accessories for the Bravos, everything is included to convert it according to your specific requirements … Single-Prop, Twin-Prop, Jetliner, etc.

I don’t think I need anything else …thank you anyway.

I don’t think I need anything else …thank you anyway.

I mean stuff like this (but it need not be in green, unless you want it). Other options are available: 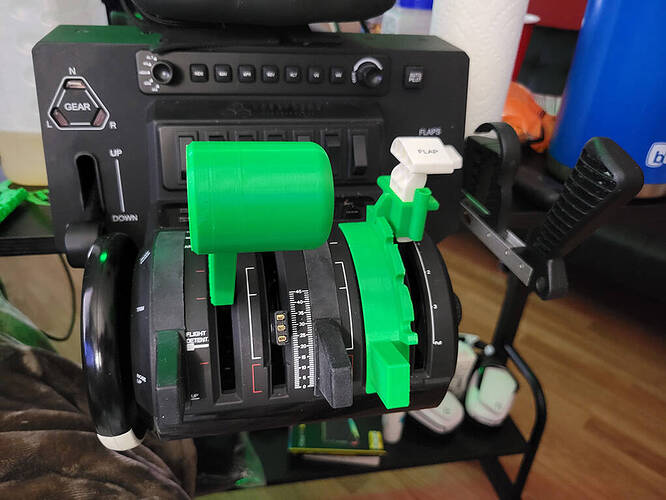 Allright…looks funny, but i must say, i hate Green

I have to look for the part first when I get it.
Hope it doesn’t cause any problems and works well … have you had problems with it?