I just found a scenery enhancement for the Dole plantation, check it out on flightsim.to: Dole Pineapple Plantation Wahiawa, Hawaii » Microsoft Flight Simulator

Free Night lights update for those who already have night3d Usa Pacific or Hawaii packages; now Usa Pacific Version 5 all in one package.

There’s also a new freeware PHPA; I already have the South Oak version, but checking out the freeware as it seems to do a lot more in the adjoining bay. 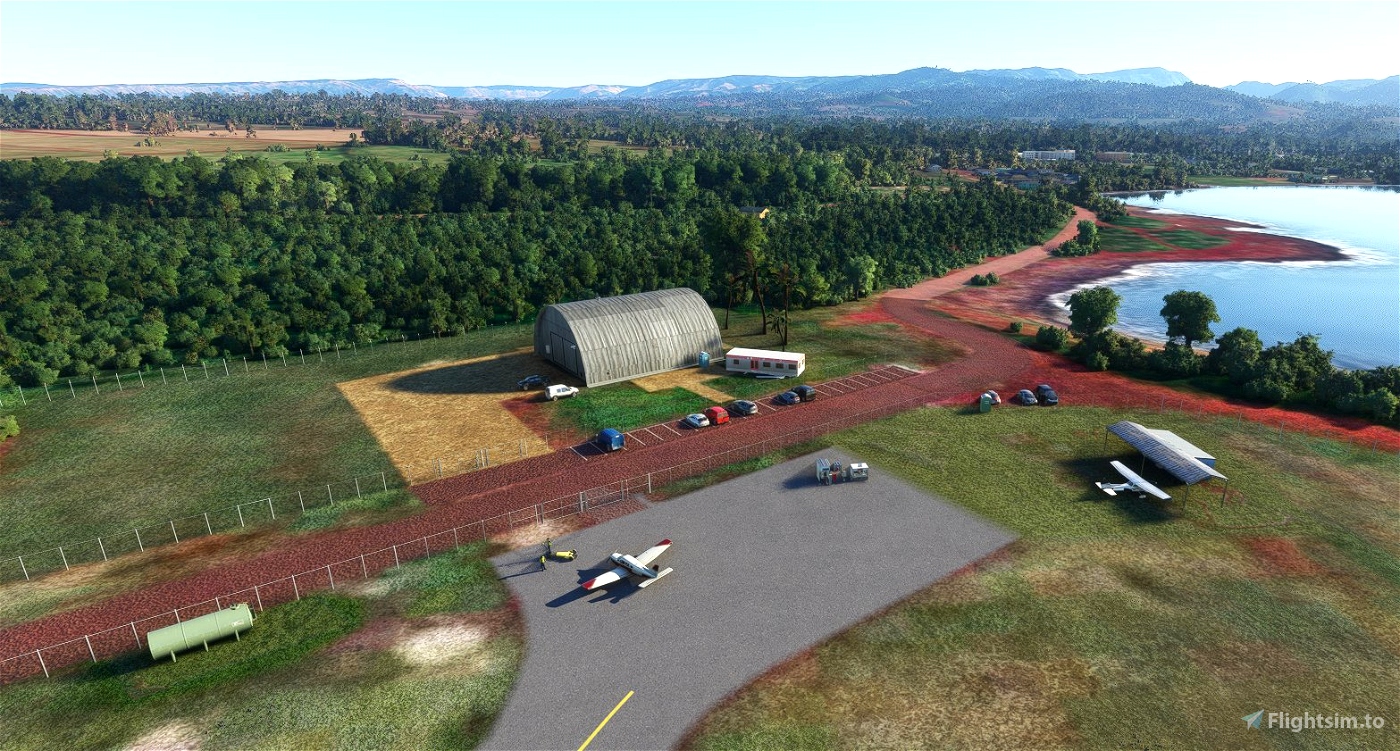 ✓ Hawaii Seaplane Bases - Port Allen is a Microsoft Flight Simulator 2020 mod created by MojaveHigh. Download for free to enhance your experience in MSFS 2020.

@BoilingCaesar4 thank you for the heads up on that! I have a qualifying product, but when I put the new one in my basket it showed I still had to pay. I emailed SimMarket for clarification.

@Editer thank you as well! I will grab that and check it out.

Has anyone heard any Hawai’i related flightsim news? On the aircraft side, I haven’t heard anything for a while on the DHC-7 from SIMWORKS/PILOTS - the DHC-8-100/200 from Skyline Simulation has gone “dark” as well.

Last I heard on the Milviz 737-200 /adv is that it is being worked on. I got a reply on their discord when I asked a (month?) ago - they were going to have that “state of the state” update on Twitch a couple of weeks back but had to cancel because of illness I think.

The DC-3 is coming in November for the (40th Anniversary!!!) version of MSFS.

I still have plans to get the Short Brothers 330 in the sim. I mean, Hawaiian had three of them, so …we need it.

Doesn’t hurt that it’s my favorite weird regional airline turboprop. Carenado has one for other sims, and they’ve said to me in the past when I inquired that they plan on bringing their whole product line over…but they wouldn’t tell me when. I have a feeling that my plans might beat theirs. Fingers crossed.

Not sure how many folks out there would love a Sikorsky S-38, but that along with the Bellanca CH-300 Pacemaker were what HAL started with back in 1929 . (First scheduled service was November 11, 1929, from PHNL to PHTO.)

Regarding the Bellanca, HAL found the original aircraft, bought it back, restored it, and they (at least used to) offer flights in it to employees! m]My wife and I got to ride in it with Mark Dunkerly, then CEO, many years ago. It is the first airplane I’ve been in that I can say “has a taste.” LOL! (that taste is oil) - man that thing accelerated QUICK when he ran the throttle up to take off of 4R at PHNL. I had a video of the flight - will have to see if I can dig that up.

(don’t worry, Aloha Air fans - I love them too - just gotta get back to work here…)

Hmm. Seems if someone were to get involved in aircraft design they would have quite a few projects already lined up…

Took a quick lunch hour flight to compare them!

Basically, the airport looks a bit better on the South Oak version, and there’s some great work with the rocks just past the runway.

The marina looks better on the MojaveHigh freeware, and there’s also a water runway added there for seaplane starts.

Both are excellent. No regrets on buying South Oak, but if I didn’t have it, or I was primarily a seaplane flier, the freeware MojaveHigh effort is superb.

Yes to all the things you want!

I’d add the Boeing 314 Clipper, as well. Pilot’s has theirs under development for MSFS. I had the FSX (or maybe even FS2004?) version way back when and it was nice.

I just hope they don’t want $99 for it. Looks like they dropped the P3D version from E89.95 to 49.95, so hopefully they’re seeing they can get better sales at a more reasonable price. They did introduce a basic version for P3D that’s much cheaper, but it’s actively crippled (less fuel, autopilot only has straight and level) vs just being simplified. I don’t care about (or want to deal with) transferring fuel between tanks, controlling voltage, or using handpumps, but I do want a full autopilot and realistic range/peformance/handling.

I’d add the Boeing 314 Clipper, as well. Pilot’s has theirs under development for MSFS. I had the FSX (or maybe even FS2004?) version way back when and it was nice.

Oh man that would be fun. How many nutballs (lol like me) would do Trans-Pacific flights in real time? PanAm livery, of course.

It seems that there are two Hawaiian updates from NSS on Simmarket for quite some time, but no update on OrbX? Does anybody know when OrbX will be updated?

Ok, so this is a fictional livery, but if Hawaiian Air had BAe-146s, this is what I would imagine they would have looked like:

Other than the registration number being darkened a bit, I think that’s it! I’ve asked the artist, @Nerbulus, to chuck it up over at flightsim.to for interested folks to grab if they’d like.

GSX apparently decided gate 31 at PHNL is a UAL gate.

…and jeez could we PLEASE get a good third-party PHNL? We’re two years into the experiment now.

Curious, does having say landmark hawaiphdh along with the regular addon phdh cause an issue of overlap, theres actually a few of these landmarks that could conflict?

Also… is there an updated masterlist of the addons recommended overall, maybe minus a few of the ones that have glitches (ie: like the mesh that sounds like in parts it may be glitched?)

I’m not seeing a link to taburet 3d lights v2 anywhere for some reason?

Also… is there an updated masterlist of the addons recommended overall, maybe minus a few of the ones that have glitches

That has been on my “To do” list for a while. >.< I created a facebook group (fligthsim hawaii) that I haven’t done anything with yet. Real Life stuff the past 12 months has been nuts…but my goal is to make a resource for folks (probably mostly msfs to start) so that we can have honest reviews of the paid and freeware stuff out there - scenery, airports, airplanes, the whole gamut - but focusing on Hawai’i and my self imposed limit of 1500nm from PHNL.

I’ve needed stuff to distract me from the crud going on outside of MSFS, so maybe it’s time to push that one up in priority!

I can’t recall if I’ve shared this yet, but this is going to be part of the resources for Hawai’i fliers! If you run into any errors or omissions, please don’t hesitate to let me know. You won’t hurt my feelings, I promise.

I think I have it set so that anyone with the link below can view the Google Sheet.

I found that Northern Sky Studio PHMK molokai clashes with south aok phlu in that two light houses get placed there for some reason (doesnt seem like theres an issue with keeping flyndrive4d landmark-hawaiphlu enabled though i dont know what it adds), anyone else ran into this one?

Northern Sky’s Molokai airports contains both PHMK and PHLU. It sounds like you’ve got a duplicate airport situation going on. I’d try enabling just one airport for PHLU and seeing if that sorted the issue.

For some reason just when i have northern sky enabled i see two… disable this one and enable the landmarks and the other and its fine.

I guess ill just look for another phmk to fill the void.

Just saw this one pop up over at flightsim.to! I haven’t tried it yet, but I will!

Kauai and Oahu the Hawaiian Tour

I know there’s a payware A330 (not sure which variant) in progress, but I just found out that the Project Mega Pack gang has a freeware A330! It’s a -300 model, whereas HAL flies the -243s, but it’ll work as a stand-in for now.

Then @Nerbulus already had a Hawaiian livery for it (based on N370HA, which didn’t have the newer style “ghost” lei across the fuselage).

I’m checking out the aircraft now. Might have to invite my senior A330-243 FO friend over (who also happens to work in training at HAL) to help me out.

Lots of cool stuff for PC, but sadly not so much for Xbox, since we can only use what’s on the Marketplace. Fingers crossed that some of these items make it there.