Any Reviews for KGSO Payware?

I’m thinking about buying this, but haven’t heard very much about it. Does anyone here have this, and if so, how is the performance? This is my home airport, and I’d love to finally have a good representation.

I have not purchased this one, so I can’t give you specific info, but all I saw from this dev so far was rather mediocre, so I would hold off until you find more info.

IMO, FSXCENERY represents the bottom end of quality for scenery. I purchased KPBI to get a feel for them and pretty much got what I expected, which was not impressive. Adequate models, low-quality, seemingly recycled textures, nothing special. They also made no effort to fix up bugs in the basic airport (i.e. IIRC there is still no way to get gates to connect there), so I doubt they are making any efforts to improve the overall accuracy of the airports themselves. I suspect they are just throwing a few models in and calling it good. Their efforts seem to be fairly slapdash and you can find much better scenery for free over on flightsim.to (unfortunately not KSGO yet though).

I would expect performance to be fine. They model so little detail that I doubt they have enough polygons to affect performance negatively. What you see in the pictures is what you are going to get; nothing more. If you can be satisfied with that, then it could be worth the purchase because it will be (barely) better than the default airport. That is about all you can say for FSXCENERY.

Just ignore everything from this developer. This is rushed out trash. He releases about an airport every other day and they are below common freeware quality.

FSXScenery on SimMarket is the same developer in the MSFS 2020 Marketplace that goes by the name of MSFScenerybuilders. I got burned by their KSLC scenery which in my opinion is worse quality than most freeware. I gave it a 1-Star rating in the marketplace but it never showed up. I’d avoid their stuff like the plague.

I’m very unhappy with my purchase from them on Simmarket. Most of the buildings are 1-2 feet off the ground. We get better freeware.

unfortunately not KSGO yet though

That’s why this one caught my eye. The stock KGSO is trash on the north end, and I’m half tempted to try this anyway. The screenshots of that section at least look like the ramp is level. Gonna have to do some more thinking on this one…

The add-on is good enough for me because it seems to have the airport layout correct including the old tower and the new tower. Some buildings have logos such as FedEx in the cargo area. There are several MSFS flaws that other airports have that probably can’t be fixed by scenery.

I did not realize that the airport was so big! The level of detail is not as high as other pay-ware airports such as Meigs (KGCX) where it is possible to wander around inside the terminal and tower and it has an open hanger to use. But Meigs is much, much smaller than KGSO. There didn’t seem to be any performance impact.

One of the stock airport’s biggest drawbacks is the knackered taxi designators. When you start a flight from the GA parking area, ATC normally assigns 23L as it should, but it tells you to get their via Twy A. In reality, the taxiway that runs along the terminal side of 23L/5R is Twy K. Do you know if the developer at least got that part corrected?

I did not realize that the airport was so big!

Both main runways are 10,000’+. 23R/5L was originally supposed to be for exclusive use by FedEx, but even though FedEx built a major hub there (the building with their logo is correct according to the screenshots), there still isn’t as much traffic as originally planned. Now the newer runway is used as a backup. Passenger flights don’t like the new runway because the taxi distance is so much higher. Both runways can handle just about anything you throw at them. I think the only things that haven’t ever landed are the A380 or the An-225. Everything else has, including the An-124 at least once. Several different large military types also practice approaches and T&G’s here.

There seems to be some taxi signs missing. The ones that are there don’t match the airport diagram. This is a common problem for most MSFS airports. I have no idea if the creator can change the taxiway signs. All ATC taxi instructions said to “use the taxiway” without specifying taxiway letters.

Asobo will fix uneven pavement if reported through ZenDesk.

They did at first, but not recently. I sent the following KGSO video to Zendesk as part of request #101410 on 11 April. It has yet to be addressed, even though my ticket is marked “solved.” 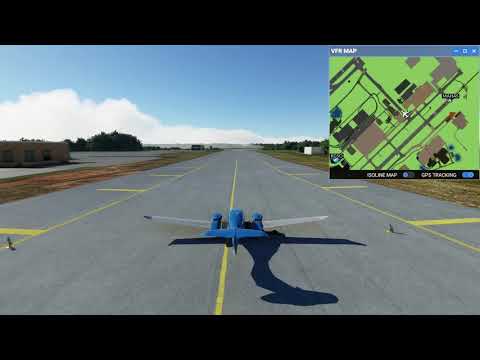 They did at first, but not recently. I sent the following KGSO video to Zendesk as part of request #101410 on 11 April. It has yet to be addressed, even though my ticket is marked “solved.”

“Solved” on the Zendesk just means the ticket is solved, not the issue. IE: a rep has seen it and added it to the queue.

Well, then it’s in line behind the World Map filter preference persistence request and the steam C172 ammeter being reversed, both of which were requested 10 months ago…

I honestly think Zendesk is where help requests go to die. I just wish for once that I was wrong.