Anyone also not getting NAVAIDS/Search bar on VFR Map?

According to the patchnotes there should pop up an panel with navaids, frequencies a.s.f. on the vfr map. However with me nothing happens. Very weird. resizing, open/close, dragging did not bring up anything up.
I see people with screenshots of their vfr map and tell me it works for them. but not for me sadly.

I have store version and have not been in the beta. update yesterday went through without any problems.

Any tipps greatly appreciated!
Thank you! 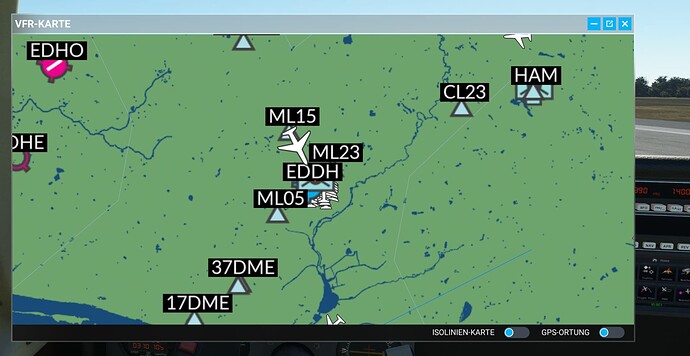 Do you have any VFR map mods installed?

Looks like you have the old map also. Is your game updated?

How could I load into a flight without the update?

Of course it is updated. I m using DLSS now.

No Mods for the VFR-Map installed.
In the content manager everything is updated.

Edit: Seems unrelated to the aircraft you choose: Tried with Asobo standard aircraft (Cessna 172), with PiperArrow IV and Milviz310

For anyone with VFR map issues,

The VFR map is entirely all new and any mods attempting to mod it with old code will break the map.

Bingo! I had a WTG3000mod somewhere in the community folder. Did not realize it counts as a VFR-Map Mod. I removed it temporarily and now it works.

I did update the GTN750 though and now it does not conflict anymore with the new map.

Hi, I updated WTG3000 and GTN750, so now the map info works but only once in a flight!
Moreover, the zoom by scrolling doesn’t work - 5nm only

First:
Remove all mods from the community folder, then check if the feature is working as advertised.
Then find the rotten mod with the binary exclusion method.

Tanks for the tip! It solved my problem too.

I have never had any Mods in my community folder. It is blank.
I DO NOT show any Nav Aids when bringing up the VFR Map. The VFR Map only shows aircraft.
Maybe I need to uninstall and re-install something ?