Anyone figure out how to force MSFS to use more RAM?

How can using less RAM then you have available possibly be better ?

That is sort of like your boss halving your pay packet and when you complain he tells you “but isn’t living on less money better?” .

Interesting video, definitely underlining how much they have changed (and not just optimised) the base sim. Although they previously claimed not to have compromised visual quality, I think they were not being quite honest - this was referred to as a “last resort” in the video, rather than a definite line in the sand.

Most interesting to me was the “optimisation” of the trees. My bugbear at the moment is the poor rendition of trees, compared for example to any adjacent grass, which appears to have been left untouched. This is one area where there is an obvious degradation.

Ok so that's why Asobo Downgraded his game on PC? General Discussion

This is the scene I get landing near some trees in the H135: [image] The grass is great, the trees are abysmal. They never used to be this bad. This was what convinced me of the visual downgrade. (This is with the trees set to “High” in the options.)

On the subject of the opimisation of VRAM and RAM: I’ve only got 4Gb of VRAM, and that is (and always has been) close to the maximum usage. On the other hand, the amount of RAM usage in the sim for me (and it seems everyone else) is about 7Gb, even though I’ve got 64Gb total available. My usage used to be rather higher before SU5, more like 11Gb. It seems their effort has gone more into limiting this, and they make no secret of the need to fit it to work well in an XBox. They were working to a demanding deadline with the XBox release, so probably decided to use the code that “works” for XBox in the PC as well.

Now that they are fully aware of the backlash from PC users, and with no deadline to meet, I hope they will add the code necessary to take advantage of the extra RAM available to many users and revert the degradation in visual quality. They can do this without compromising the XBox performance, so they have no excuses.

Probably yes, they know what happend with Cyberpunk

How can using less RAM then you have available possibly be better ?

That is sort of like your boss halving your pay packet and when you complain he tells you “but isn’t living on less money better?” .

Because its more a kin of having the choice of 2 cars, both are equally nice and performance is close in both cars, but car a gets 20 mpg and car b gets 32 mpg. Hmmm which car should I buy.

nobody will know… nobody…
marketing statement over and over, but to get hit by the bitter truth and seeing 64gb Ram being used like i could sell 48 of it…

THIS was an outright lie MS/Asobo did exactly that.
1min 50sec

i wonder if Jörg Neumann ever actually used the sim in its “sim” intent?

So when Asobo decided to make FS2020 work with the lowly X-Box, with limited RAM and GPU, they killed it for those of us who put some big bucks into 32/64 Gb of fast RAM and a GPU with 11 Gb. Well, that just frosts me! It looks like it may be time to take a break from FS2020 and get back to my other gaming.

Will someone wake me up when Asobo fixes this?

I see your point, but I think most people reporting these issues do see a difference in performance (LOD, pop-ins, etc.). So it’s not really a matter of efficiency (like mpg) but a matter of the update not allowing their systems to use their full capacity.

For me, I think the better car comparison is that SU5 looks at your high-performance vehicle and says, “Nah, you don’t need all that horsepower. We’re gonna cap it off at a fraction of what you’re capable of since that’s what this other car uses.”

And we’re not just driving down the street with a program like MSFS. This is a major league race we’re talking about here, and high-end PC users are now restricted to operate at much lower levels.

I like the boosts in fps I’ve personally seen and that some of the visuals have improved on my not-quite-mid-range rig. But there are lots of other issues that show up that could be solved by not limiting the RAM our systems use.**

(Full disclosure: I know next to nothing about cars, so forgive any weakness in the analogies.)**

I have copied in the original post below so everyone knows what it is all about please please all read it:

The problem that is causing everything for everyone. MS/ASOBO have limited RAM and VIDEO Memory in the PC Version to Match the XBOX! It is hard coded to 6.8GB Available RAM and 6.5GB Video RAM to use and no more. Does not matter how much ram you have 16gb 32gb… or Video 8Gb 11GB. You will not be allowed to use it on a software level of the Sim.

I am not sure exactly why but somehow my system has broken through any memory/VRAM limitations. I have read many posts about the memory limitations and I am very concerned that SU5 and/or the hotfix didn’t install correctly due to 3 CTDs during the installs or there might be a memory leak that needs to be fixed. 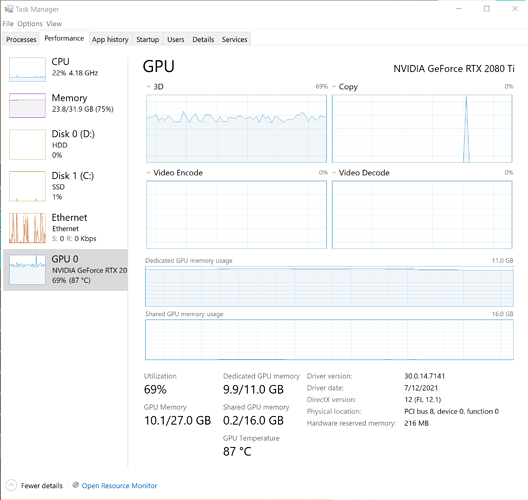 That don’t look like the dev mode FPS window to me at all?

That don’t look like the dev mode FPS window to me at all?

Sorry, I though this topic was about memory usage/limitations, not FPS. Besides whenever I look at the FPS counter, it shows GPU 0.0. What’s up with that? Broken?

Shows different numbers that hold up his point … unless you really really really turn up everything to 11, lap Staten Island and wiz the cam around a few dozen times you can get it momentarily past 16gb.

Yes, I tried and did it.

In view of the limited use of RAM in SU5, presumably MS/Asobo need to change their recommended specs: 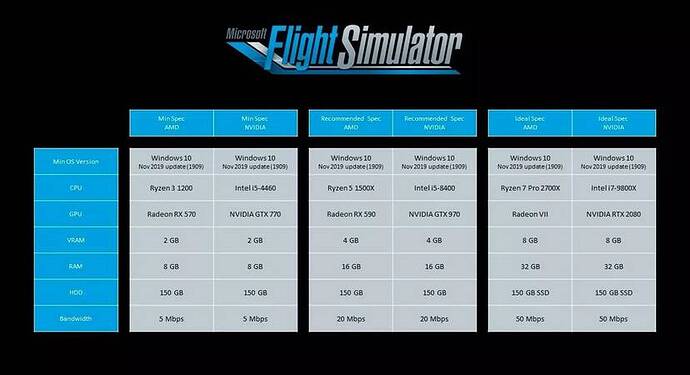 So in the early days, they were saying the “Ideal” was 32Gb RAM, with 8Gb as the absolute minimum. They obviously thought the more the better.

Now it’s: “Doesn’t matter what RAM you’ve got, we’re going to run you below the minimum”.

Maybe they thought their other optimisations would make up for them limiting the game caching more than 8 Gb of scenery data.

They were wrong of course, and the resultant pop-ins are dreadful.

Shows different numbers that hold up his point

First, my FPS Counter screenshot shows that it is broken. But let’s move on.

Until someone posts Asobo confirming documentation I’m calling BS on all this.

So even there is massive evidence from countless users, you call it BS when DEV is not confirming but decides to stay silent on this instead?

This is a very weird attitude.

It simply is a fact, that RAM usage is not matching the individual potential.
And there was statements from the DEVs that one of their main focus for this update was to reduce Memory usage.
We were just not prepared that this will equal limitation by a cap but rather expected it to be an optimisation.

So the only question is, if that was on purpose or is just a side-effect of the optimisation that can be fixed.

But there is no doubt that RAM is not utilized above a certain level even though it might grealty help to eg.reduce pop-ins.

The bottom line is the approach that Asobo/MS took in presenting these restrictions and downgrades as “optimizations” really annoys me.

Dozens confirm this, I’ll take three examples please and I want to see over 20gb total on the Dev counter.

Doing some testing this morning and I may be working with a confirmation bias.

I think I see something even more odd than a limit to 16gb?

Flew for about an hour this morning. With LOD at 4 I don’t notice the pop up very much (they are further away) but having some lag and stuttering moving my head from side to side on the ground. I’m going to try reducing objects LOD to 3 and see if that helps. I’m keeping terrain at 4.0 because I hate the trees just popping up!