AP indicator in MFD doesn't go out when AP is disengaged

Why is it that in the majority of GA aircraft (I don’t fly any jets so it might be different in them) that when I disengage the autopilot the green AP symbol in the MFD continues to be displayed and yet the other indicators disappear? The autopilot disengages well enough, I just find it confusing that the AP indicator continues to show. 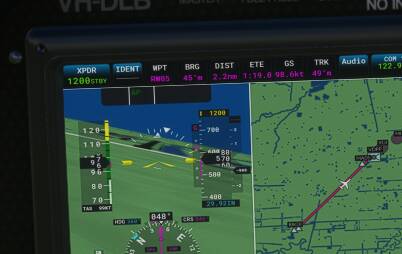 That’s a known issue on all three Garmin systems in the sim.

Thanks. Sometimes it disengages but the AP indicator remains and turns yellow, that’ll explain it too.

Known issue to who? Users or developers?

I haven’t flown the 172 in months, but every other plane I’ve flown using either the 1000NXi or the WT mod’d G3X (Vans), the AP disconnect warning stays on until I shut the plane down.

I noticed in the King Air that the AP indicator goes off if I press AP button on the dash, but if I forcefully steer through the autopilot, or press the toggle button on my controller, it doesn’t.

I just did a short hop in the 172 just to test this, and can confirm that the AP disconnect warning goes out in a few seconds. I’ll have to do another hop in the Kodiak and see what happens there, but unless my ~57-year-old memory is completely gone, I think it stays lit. I work on 'puters all day, and I need to put my own to rest for a while, so I’ll try to do a test hop tomorrow.

Thanks for testing. I fly a variety of GA aircraft in the sim and on some the AP indicator goes out but not on others. Sometimes it turns from green to yellow when I disengage too and I’ve no idea why.