Are we receiving another NavData update today/tomorrow?

Title. Last time the AIRACs got updated, we got an unannounced navdata update ingame. The AIRAC cycle expires today, so are we getting a similar update today/tomorrow?

I would bet not. I’m pretty sure everyone is on vacation (hence the complete silence in communication). I doubt very much they’ve completely automated the operation.

Doesn’t the new Airac data actually go official on the 2nd, anyway? Which, again, is a Saturday, so, not likely then, either.

Yeah, I think you are right! Hopefully by January 2nd they’ll update it…

The first AIRAC effective date of 2021 in the real world is 28 JAN 2021. The common rule established by ICAO member States is simple – no safety-critical changes in international civil aviation should be scheduled for holidays.

They should synchronize these NavData updates with the monthly ‘normal’ updates.

In aviation, an Aeronautical Information Publication (or AIP) is defined by the International Civil Aviation Organization as a publication issued by or with the authority of a state and containing aeronautical information of a lasting character essential to air navigation.[not verified in body] It is designed to be a manual containing thorough details of regulations, procedures and other information pertinent to flying aircraft in the particular country to which it relates. It is usually issued...

As I noted, I wouldn’t expect an update in FS till the end of the week, unless they prepared it before the holidays and have scheduled it for Tuesday…

I wouldn’t be surprised if we do. I imagine they have figured out a way on how to automatically ingest and publish the data?

I was really exited with the last update as it showed commitment.

I posted links that say they do.

(for real, not msfs)

I posted links that say they do.

(for real, not msfs)

Yeah, but with the minor mistake that you’re still in 2020.

Ok, sooo…The question was, the NEXT Airac update, not the first 2021 update… No mistake there. The next airac update is effective Jan 2, 2021… Will the game update to match it? I don’t know.

Next week, I will be updating my EFB with the next update. Will the game? I don’t know. 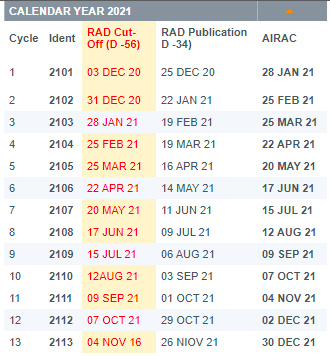 But, fact is, there is a new data set active today. So the OP’s question was valid

(and I’m updating my EFB now

Yes, valid indeed. Just fired up the sim to make sure. No update so far. Flying now became instantly hazardous.

Wrong. In the real world, nothing new is available today.

Again, please carefully read my post above and then ICAO provisions below:

ICAO Annex 15 - Chapter 6: “The use of the date in the AIRAC cycle which occurs between 21 December and 17 January inclusive should be avoided as an effective date for the introduction of significant changes under the AIRAC system”.

ICAO Doc 8126 – Chapter 4, because of reduced staffing and increased postal delays, “it is recommended that the AIRAC cycle date occurring in the 28-day period from 21 December to 17 January (both dates included) no longer be used as an AIRAC effective date for the introduction of significant operational changes. States experiencing similar problems during other holiday periods may wish to adopt a comparable system”.

RAD (Route Availability Document) is a different animal. It is a product of Eurocontrol located in Brussels, Belgium. In essence, it is a catalogue of ATS routes with ATC and military restrictions. Eurocontrol has its own cycles (34 days) and deadlines for receiving data from Eurocontrol member States.

By definition, the geography of this document is limited by the States. Therefore, Asobo cannot use it for updating NAV data in FS2020.

should be avoided as an effective date for the introduction of significant changes under the AIRAC system”.

Does that include non-significant changes?

I guess that’s Europe?
My EFB just updated with a dataset dated today through 1/28?

In Europe for sure. I myself followed the rule for years, when I developed and published new ATS routes for my country.
I cannot say anything about the data set you see – there could be minor changes or error correction.
Here is ICAO Table with AIRAC effective dates. Red colour indicates skipped dates. 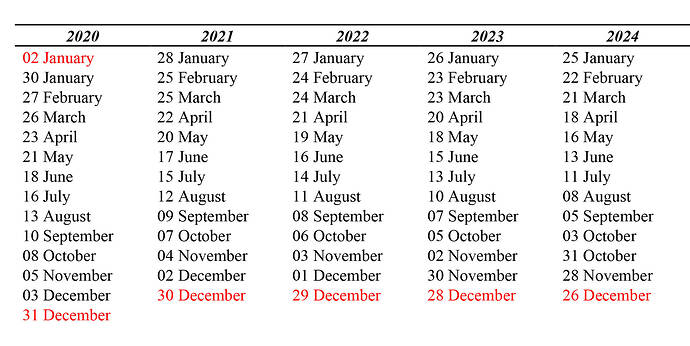 Only to clarify:
This is “only” a recommandation and not a rule. So, it depends on the recipient of the updates.

In other words:
The data must at least always ready and available on this effective date. The recipient decides then, if it will installed or not.

Airac 2014 effective start date was 31st December, as I had to go to work yesterday to update our aircraft.
Asobo stated after the last update confusion that updates will be carried out server side and will not mean a sim update with version number change.