Around the World in a Piper Seminole

Decided to share with you my journey around this big blue ball in Piper Arrow.

But first a little background. I’ve been lucky to make a career out of flying. Started in 1988, worked my way up through bush flying in Labrador Canada, a couple of regional airlines on the east coast, Air Labrador and Air Nova/Air Canada Jazz, a one year stint at Westjet, and for the last 16 years as a corporate pilot.

Since covid has slowed our flying drastically I decided to get back into the flight sim world. The visuals in MSFS being so good I thought I’d do a nice low and slow trip around the world. The plan to go VFR as much as possible.

The first airplane I ever flew was a Piper Cherokee. I do have a lot of Cessna 152/172 time, but prefer the low wing Pipers. So I splurged and picked up the Just Flight Piper Archer just for this trip.

The journey begins in the city I grew up in, perched precariously on the eastern edge of North America St. John’s, Newfoundland CYYT. Home to some of the worst weather in the world. Oh and I’m headed westbound, because really who likes a tailwind. 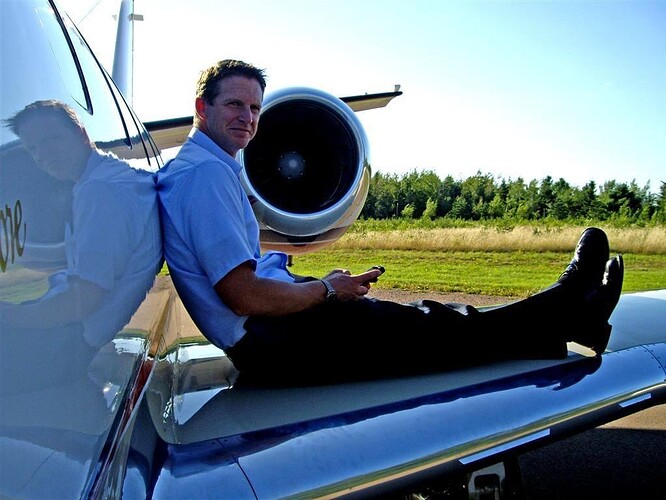 Good luck! Hopefully you’ll finish at the same time the Turbo Arrow is completed and you can do it in that airplane too, but much faster!

A wing appropriate for the airplane and bigger engines help. That thing holds less fuel than the G200 but can go farther. I’ve seen sustained climb rates of 8,000 feet per minute in the G200 but we only had 5000 lbs of fuel in the winter time.

Have fun and good luck

I attempted to do the same with the modded VL-3 with the Rotax 915is but the icing implementation in the sim stopped it so far. I don‘t want to do something big like that with custom made weather or even the „few clouds“ settings…

All around the world in a Piper Arrow. I think this will change to a jet after your 12th flight!

Do you like the Piper Arrow model that you purchased, in terms of realism? I’ve been mulling over whether to purchase it. If a real pilot likes it, I might go for it too.

Watch GripperSim’s review on YouTube. That will help you decide. 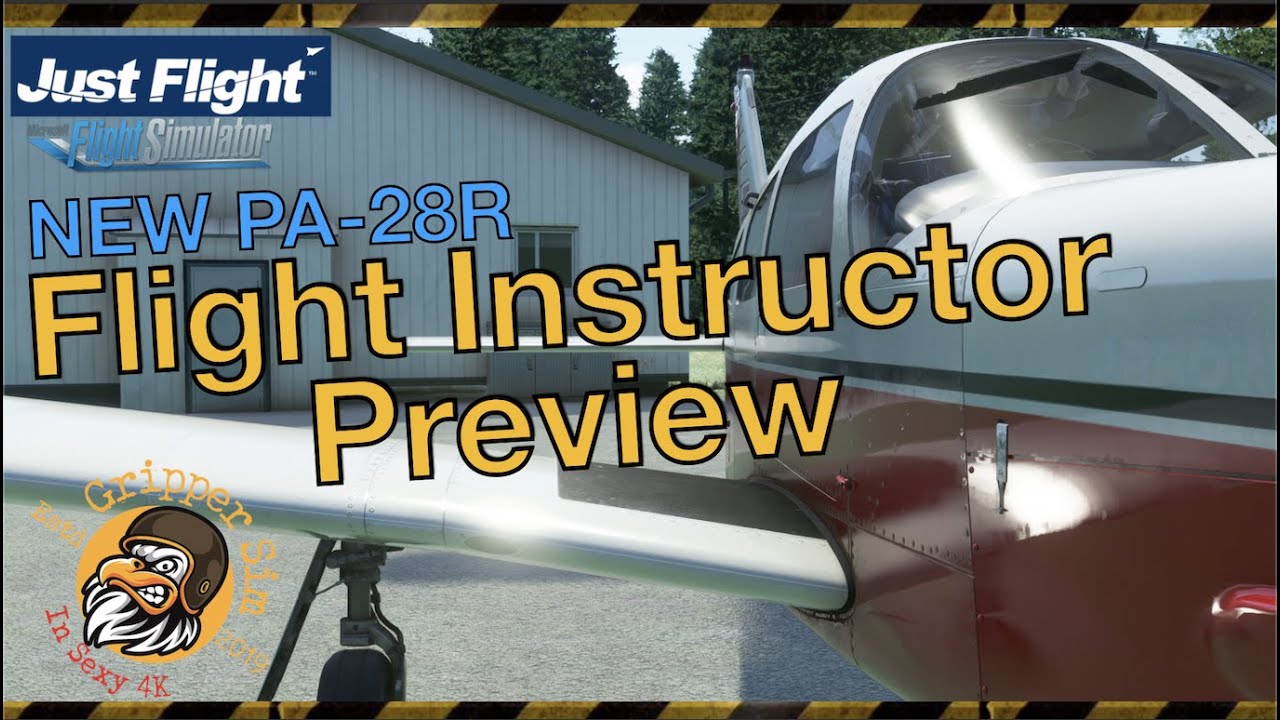 nah, I’ve spent most of my career above FL180 and going fast. Time to go low and slow and see the sights. Plus I get to go fast when I go to work. There is something nice about the simplicity of VFR in a small airplane.

The video review posted by @HURCN30 is good. The Just Flight model is very good, all the switches work, CB’s work, the sounds seem accurate. I haven’t flown a light aircraft since 1993, and that was a Cherokee Six 260 and my memory has faded a little after 9 other type ratings. It seems to be fairly accurate. As accurate as a desktop simulator can get.

Yesterday on approach into CYJT the gear wouldn’t come down. Didn’t even try to go down. The landing gear circuit breaker had popped. I reset it and the got the gear down. Don’t think too many other aircraft have that much detail plugged into them. 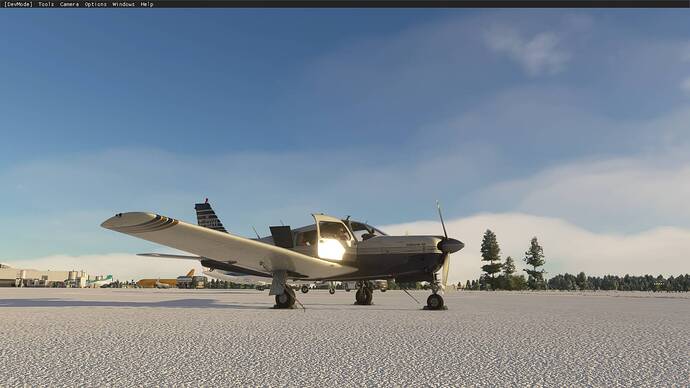 Kinda funny that I would kick this little adventure off on the one year anniversary of our province’s Covid state of emergency and the day all my flying to reduce to a trickle.

We start off in CYYT St. John’s, Newfoundland, where I lived for the first 28 years of my life. Flew a Shorts 360 and a Dash-8 for Air Labrador based here. It has some of the worst weather in the world. Not uncommon to be blowing over 50kts with 1/4sm in fog.

The day I departed was nice, sunny skies, -3C and a blustery wind out of the northwest. Departed off RWY29 and headed for Gander CYQX. 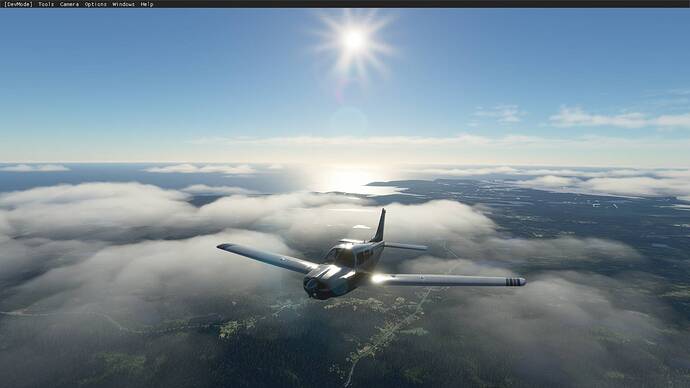 It was a bumpy departure but once up to 4500ft it was fairly smooth. The sky quickly turned overcast as there was a system moving in from the west bringing a snow/rain mix. I knew I could get to YQX for lunch and over to the CYJT on the west coast before it got too bad. CYQX was reporting winds 251 at 34kts, landing on RWY21, which worked out fine. The fine folks at Irving Aviation marshalled me in to the FBO and I topped off the Piper with fuel, and helped myself to the freezer full of Haagen Daz ice cream bars. They are known for their ice cream at the FBO. 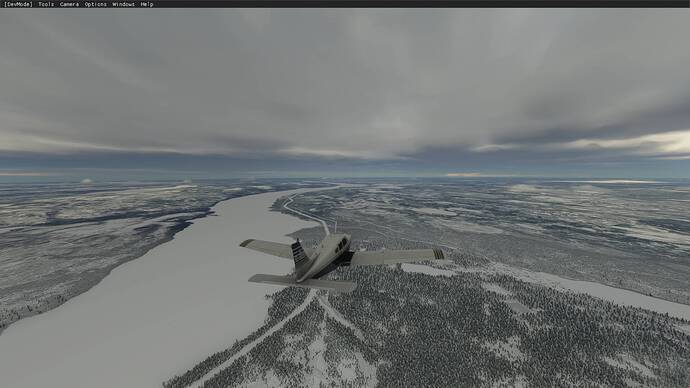 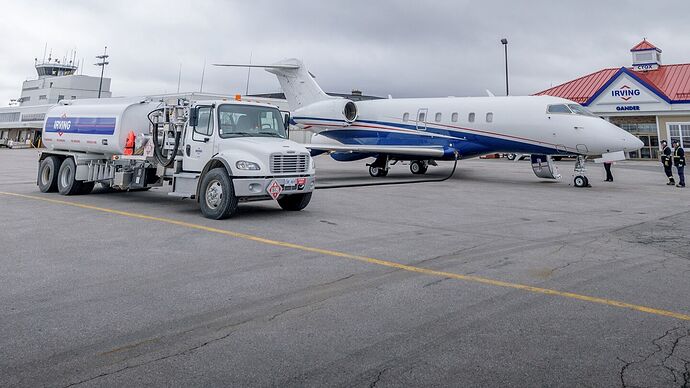 I could spend hours talking about the history of aviation in CYQX, from it being a crucial trans Atlantic refueling stop before the jet era to more recently during the 9/11 events. Google is your friend, go look it up. It’s worth it.

After eating too much ice cream I crawled back into the mighty Arrow took off and headed for Stephenville CYJT on Newfoundland’s west coast. I was staging myself for the next days trip across the Gulf of Lawrence to Nova Scotia. 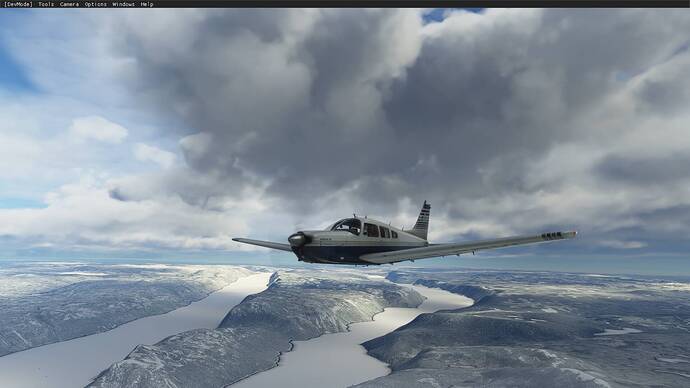 I climbed up to 4500ft into a strong headwind, the mighty Archer setting a blistering groundspeed of 71kts. Moving at the speed of smell. You know it’s bad when cars are passing you on the highway below. 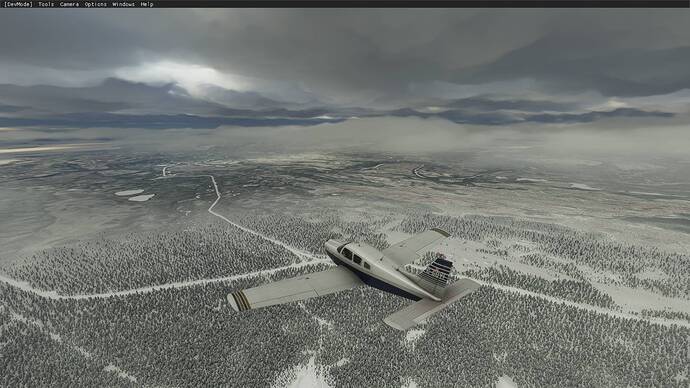 Before too long I was bouncing my way in decent to RWY27 in CYJT, the former US Air Force Base Harmon Field, built in 1941. I’ve spent many a night in Stephenville on layovers. It can be a bit of a party town, much like any community in Newfoundland.

I had my first issue with the old Piper, selected gear down…and nothing happened. Weird. Tried again…nadda, nothing, didn’t even try to move. Quick scan around the cockpit, what does my wandering eye see, a popped CB. Reset the breaker, viola the gear is now down with 3 twinkling green lights. Just Flight programmers, you are a cheeky bunch. Keeping this old guy on his toes.

Winds were gusty here too, pretty much down the runway at 25kts, so I managed to get the old girl on without too much trouble. Taxied to the main terminal and shut down. I chocked and tied down the bird, checked in with the Commissionaire and walked over to the Acadian Hotel across the street. Time for supper and a couple of pints. 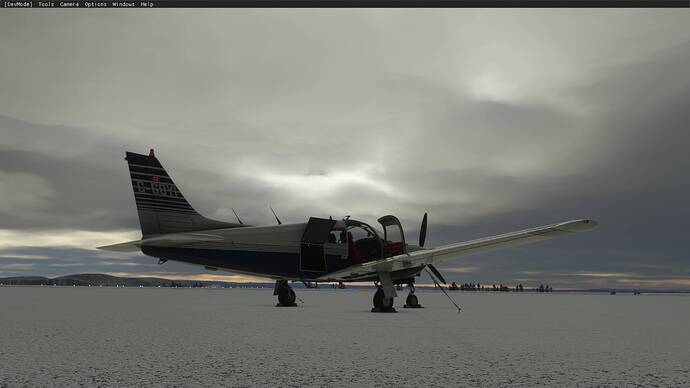 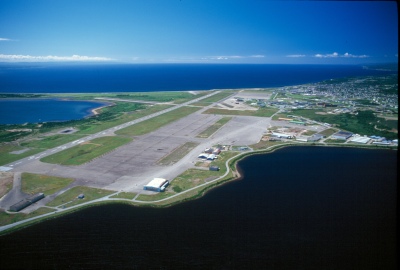 Forecast for tomorrow morning isn’t great but it’s suppose to improve. I may go IFR out of here to get me to better wx in Nova Scotia.

Liking the story aspect. How real are you going to take this? Virtual reality, Weather, flight prep etc?

No VR, but I use real weather, I check metars, TAFs, FA’s and Notams. Do a little research on the airports I’m planning to go to, FBO’s, interesting stuff about the area, etc.

Try and have a bit fun with it, make it entertaining for people to read.

Love the first post! Keep it up! Flying my 5th leg now, and trying to get to your home town CYYT now, but like you said… terrible weather.

Be careful in YYT if the wind is out of the south, bad downdrafts coming across the cliffs. Have fun

Luckily no landing. Just overflying the NL NDB, trying to snap a few pics of Signal Hill and downtown, and then heading up to Gander for the night. May not get pics of St. Johns though… METAR showing BKN003.

You fly hands off ? Can it be done in a propellor airplane long distances ?

Forecast wasn’t looking too great for the west coast of Newfoundland, rain and mid to low level clouds. The good news it was warm and temps aloft were on the plus side so no ice.

I preflighted the Arrow, topped it off with go fast juice and headed out to depart RWY09. I spoke with a cargo pilot that had just arrived from CYHZ and he said the weather gets better once you leave the island. 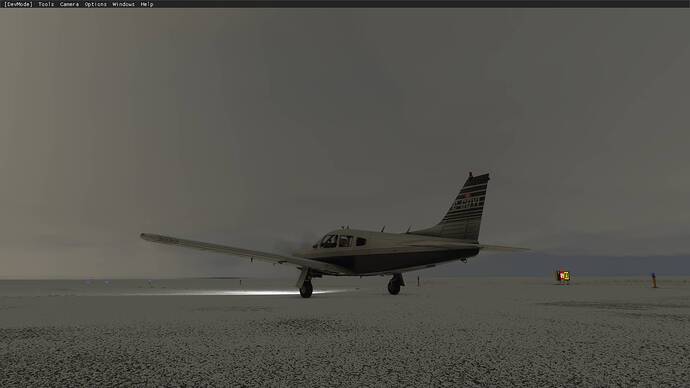 The upper winds were still strong and forecasted to stay that way all to Nova Scotia.

I climbed up to 2500ft and managed to remain quasi-VFR until I hit the coastline when the weather improved drastically. 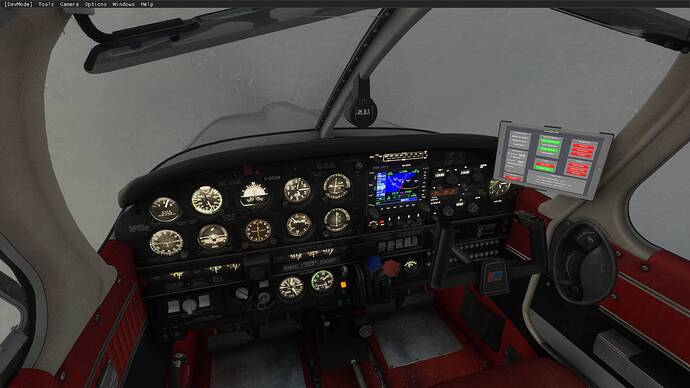 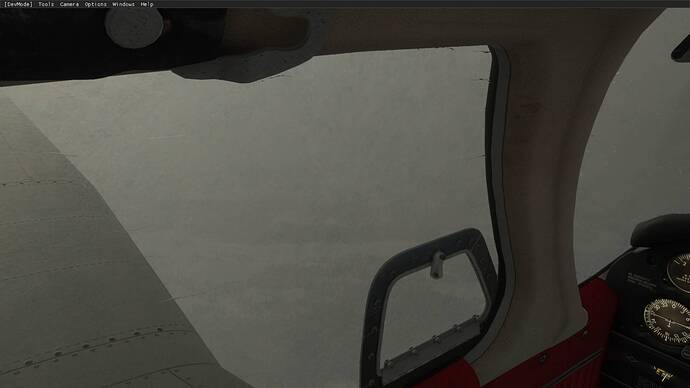 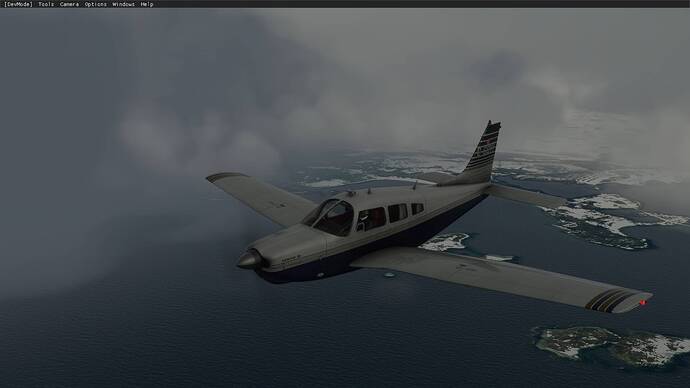 Crossing large bodies of water in a single is never fun, especially in March. An engine that was running smooth over land starts to sound rough when out over the water. Most of the time it’s in your head, as was the case today. 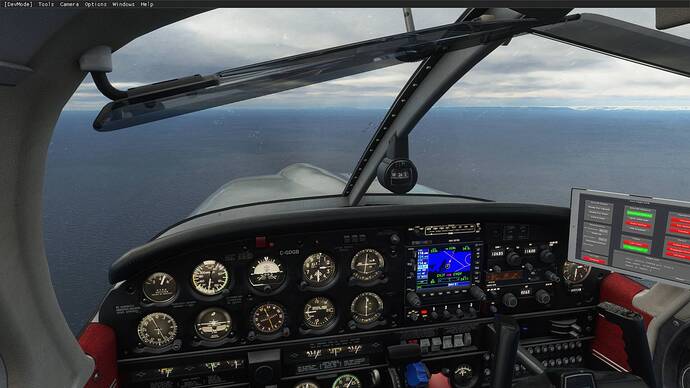 I was going to stop in Sydney, NS CYQY, but decided to push on and land in Port Hawkesbury CYPD. Smaller spot, next to the Canso Causeway. I had been here a few times before in the jet. Nice hotel at the bottom of the hill from the airport, and great seafood. 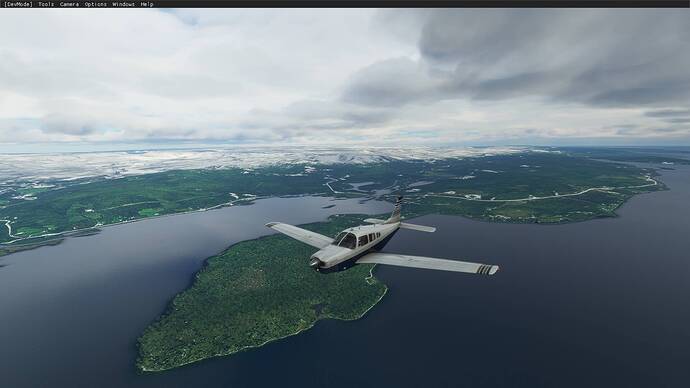 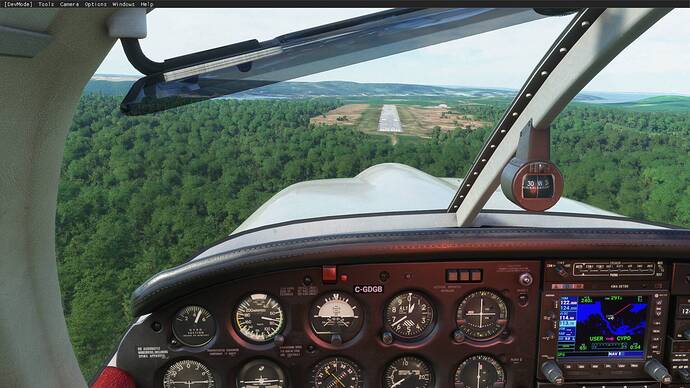 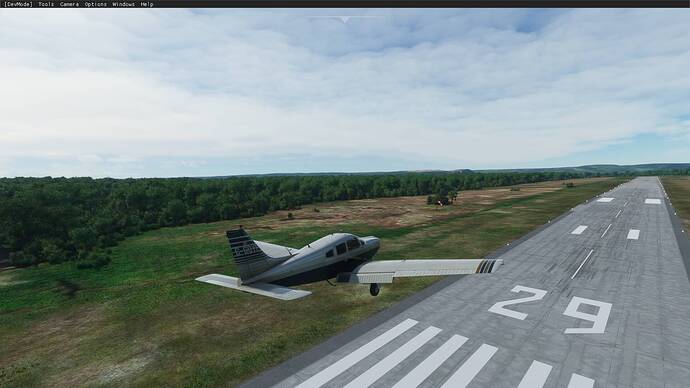 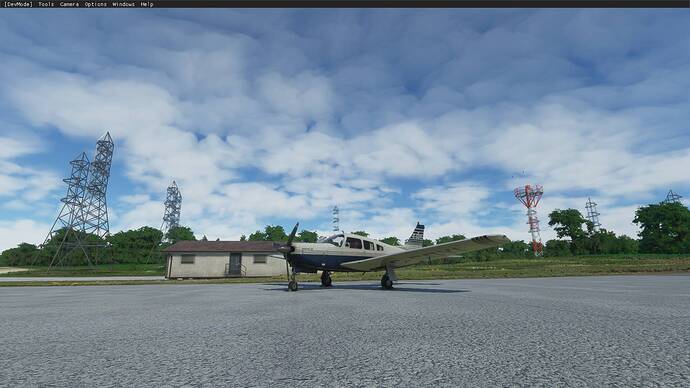 Screenshot (156)1920×1080 236 KB
Approach into YPD was rough, winds were gusty close to 30kts. Forecast wasn’t calling for them to die down much either. Figure I’ll stay here for the night and get at it again early in the morning. 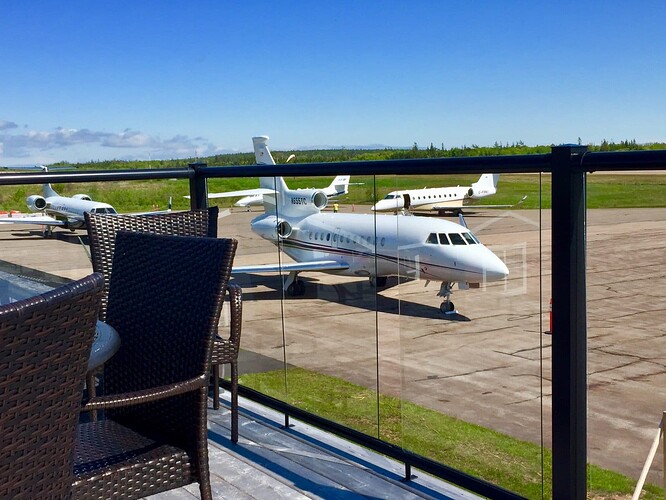 The autopilot on Arrow, is very basic, it will hold a heading and nav, but it has no altitude mode. So in rough air it requires constant attention to maintain altitude. I’m getting pretty beat up with the strong headwinds. I averaged about 71kts today. It maybe time to look at something a little faster, with a slightly better autopilot.

I am also seriously considering heading south for some warmer weather. March in Canada sucks. I’m gonna park my behind at the bar in Maritime Inn and mull over my plan with some local IPA, and a big plate of fish and chips 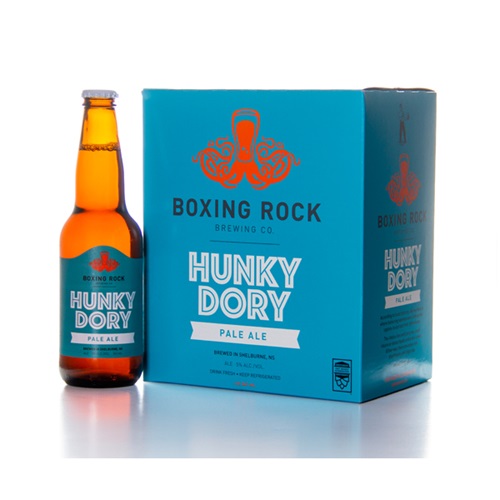 Stay tuned for the fun and games of Day 3

I am also seriously considering heading south for some warmer weather. March in Canada sucks. I’m gonna park my behind at the bar in Maritime Inn and mull over my plan with some local IPA, and a big plate of fish and chips

I’m touring the Caribbean right now for just that reason. I have to say that it is very nice! There is plenty of good DLC scenery available for that area too.