Around the World VFR (ish)

Start of my marathon around the world flying nice and low to check out the amazing scenery. Using the TBM. Starting from Edinburgh, first leg is up the East coast of Scotland, via the Orkneys and Shetfland and then on to Iceland. Early morning start, so sun rising oevr the North Sea. Sigh. 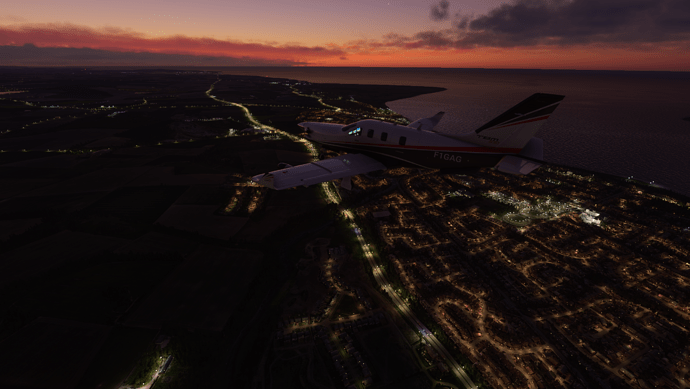 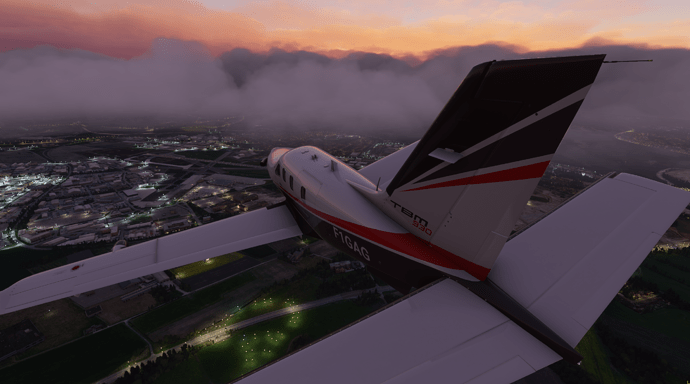 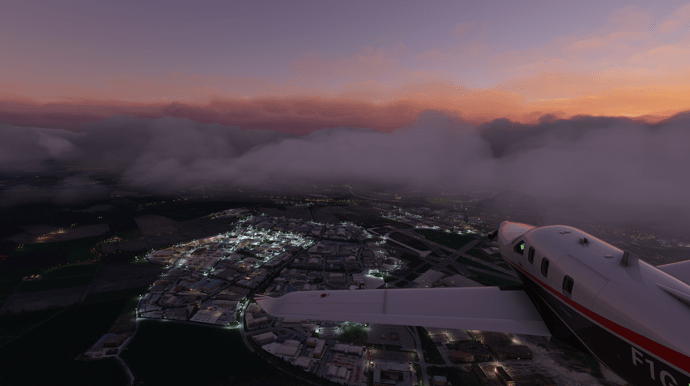 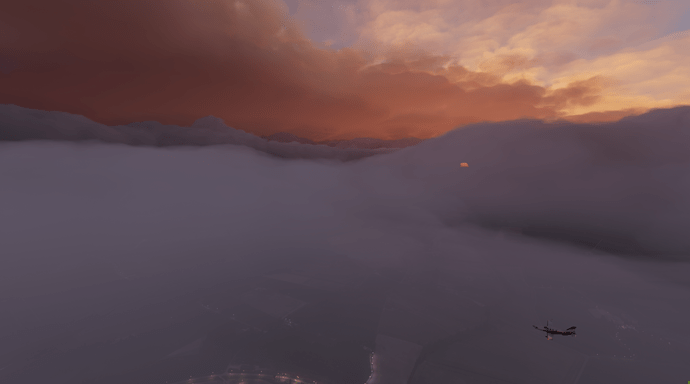 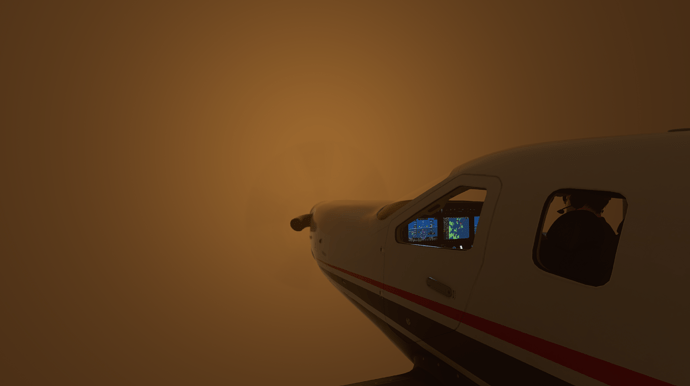 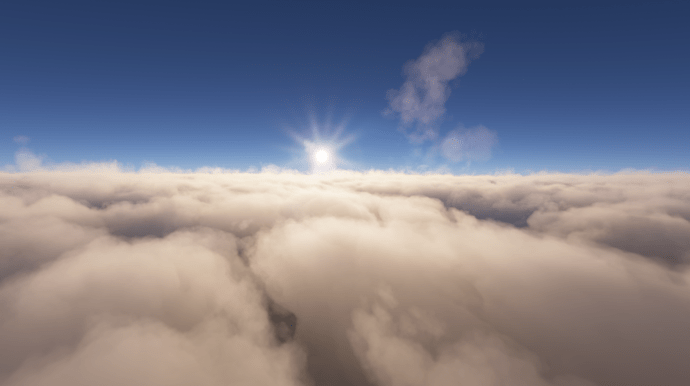 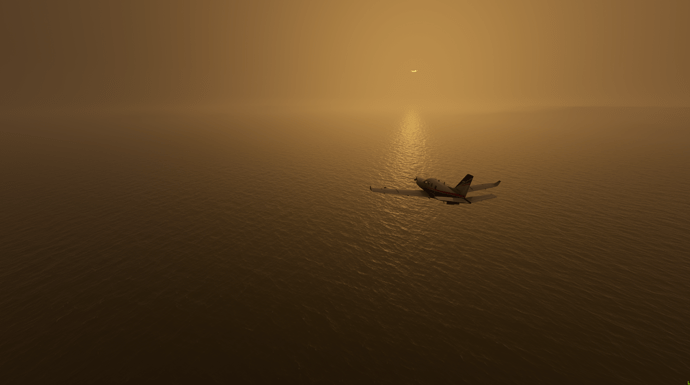 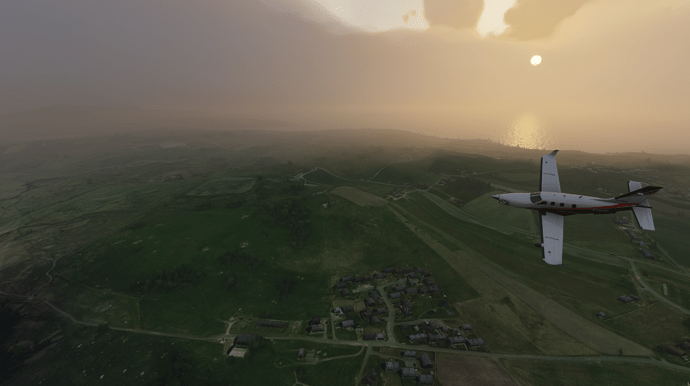 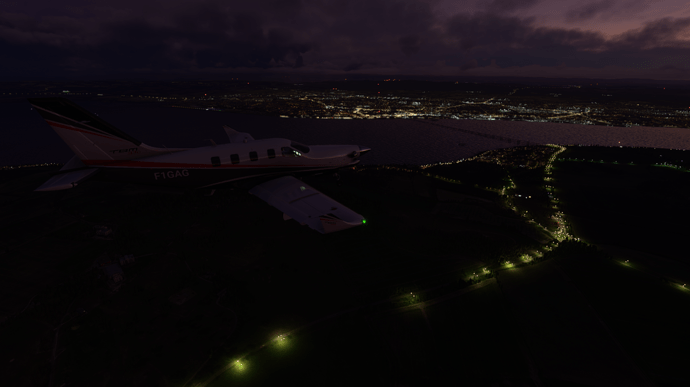 2020-08-202490×1397 3.66 MB
16 Likes
Where is my bottleneck? Tips for potential upgrade
Round the world in a X Cub
TBM Very Hard to Hand Fly. Almost impossible to feel like a real pilot
You wanted a Flight SIM and got the World
Pre/post Patch 2 screenshot comparison
How do YOU use the sim?
New Nvidia Driver 456.38/55 WHQL and Later Drivers
XPlane has Nothing to worry about
Where do you fly?
[OFFICIAL] Screenshot Website Feature Thread (Please read post for rules)
Circumnavigating the Globe...help required!
Japan update coming next week
Who is satisfied with FS2020 and enjoys this great product? Hint: NOT who is dissatisfied
gordongreig August 20, 2020, 10:04pm #2 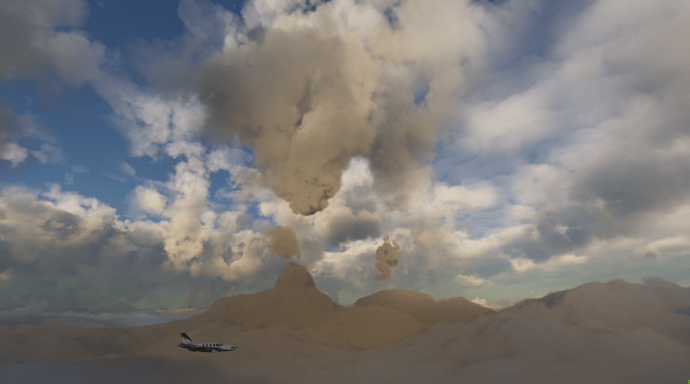 Excellent. I started my circumnavigate the world on FSX from Southend. Stopped when I got to Newfoundland and started with FS 2020.
My US segment has been made longer to hit as many of the enhanced airports as possible. Also mainly doing it in the TBM. Good speed and distance.

Cracking morning over the Faroe Islands 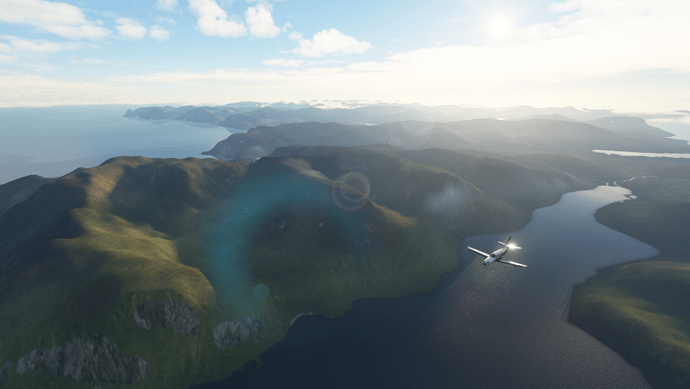 Thank you. Good idea to aim for all the enhanced scenery spots. Hoping I can make the landing in Reykjavík at this point! I love this sim 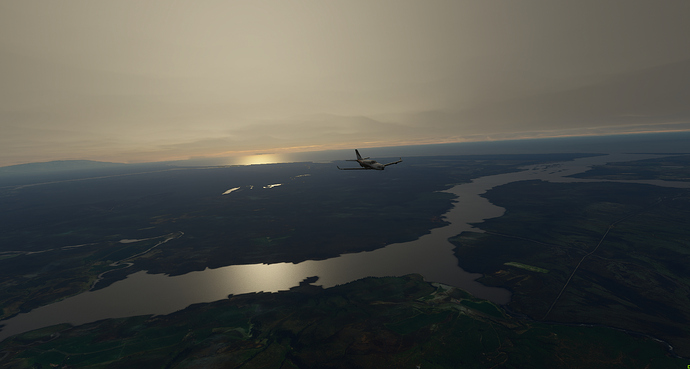 May I ask if there is a way to save while doing this or do you just start new game from airport you landed at? Also can you make a new flight plan on arrival at airport? Thanks

My intention is essentially a single ongoing save, so after each leg i would load up the save. You’re right though that this will mean adding a new flight plan. This looks doable from in the cockpit - don’t know how I could do that from the world map without creating a new flight, but maybe that is the easiest thing to do and if i start at the gate at each airport then that doesn’t feel like I’m cheating!

Having said that the simulator crashed on the approach to Reykjavik last night so I’ve not actually managed to land yet! Fortunately I’ve got into the habit of saving every 10-15 minutes. My worry is that there is a bug with the TBM as crashing to desktop on approach in the TBM seems quite common. I’m thinking I will keep trying for a while but if it doesn’t work then I will try to change aircraft mid flight (it looks like you can do that through the developer mode) and then change aircraft for future flights from Iceland.

I’ve had a few crashes, mainly when turning on my xbox controller to control the drone camera.

Great thanks for that, I’m going to try the same thing tonight so hopefully we can reprogram new flight data on arrival and fueling.

Ok, so after a lot of trying, I managed to land at Reykjavik airport, rather than Keflavik which is the International airport. Turns out Keflavik is bugged, and causes a CTD on the approach and take off. 57 tries later, I find this on this forum, so divert to Reykjavik. Lucky I had the good old save file. But, other than crashes due to that, I’ve had absolutely no issues tonight at all. So here is the approach and landing into Rekjavic 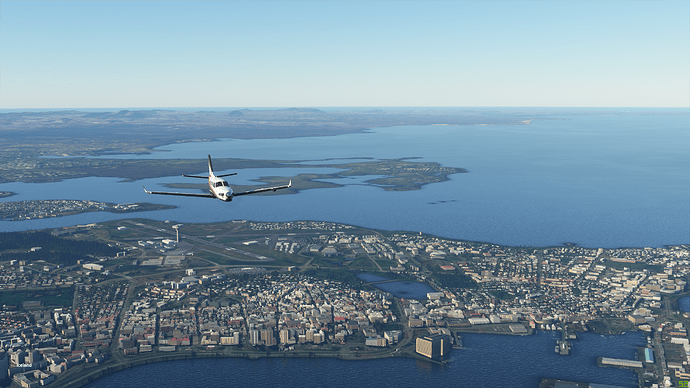 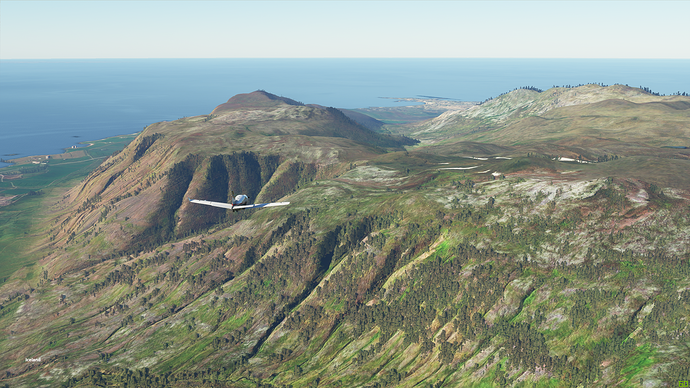 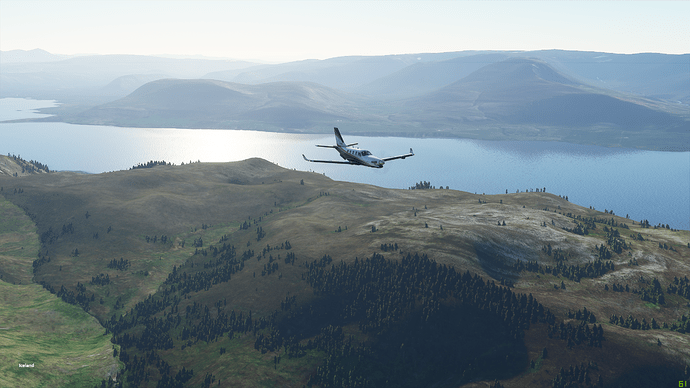 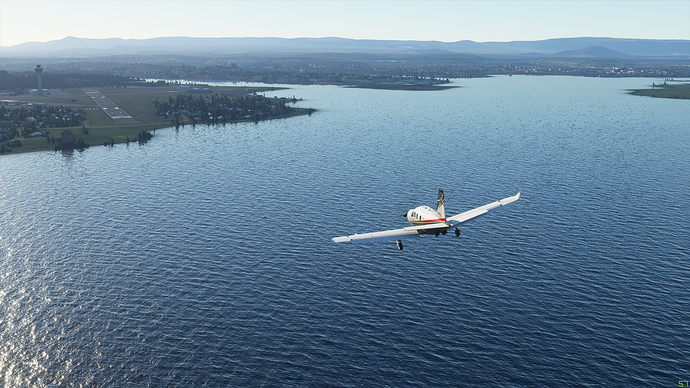 So the next leg is on to Greenland - but I decided to take a detour first and go directly North from Iceland to a small island called Jan Mayen. Just wow! I mean this is random isalnd in the middle of the North Atlantic, literally hundreds of miles from anywhere, and the auto-gen scenery is incredible! Look at these pictures. 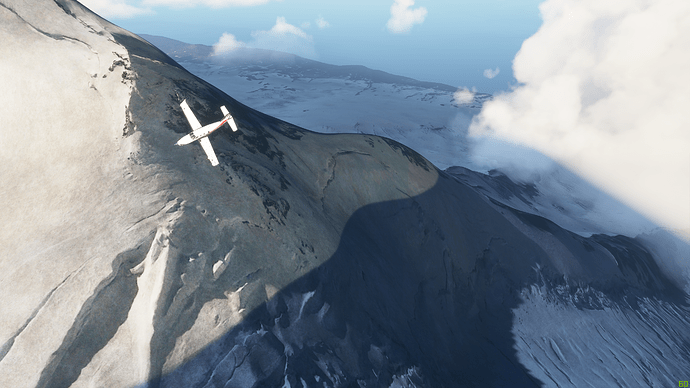 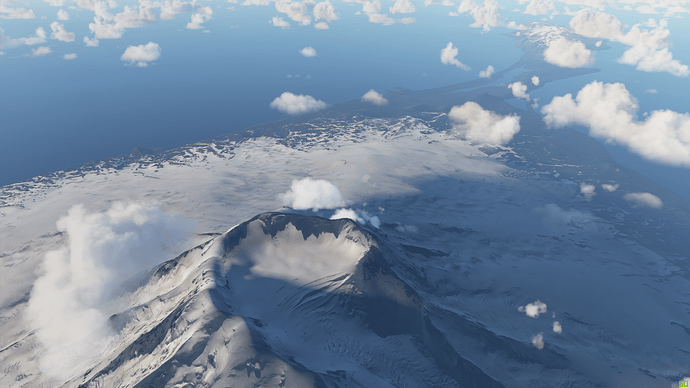 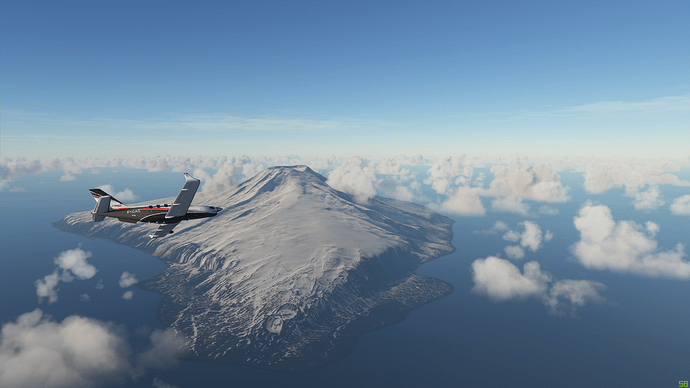 Next stop is Kulusuk (BGKK) in Greenland - should have just enough fuel to make it…and what a view as I emerge from the clouds over Greenland and start to head south. 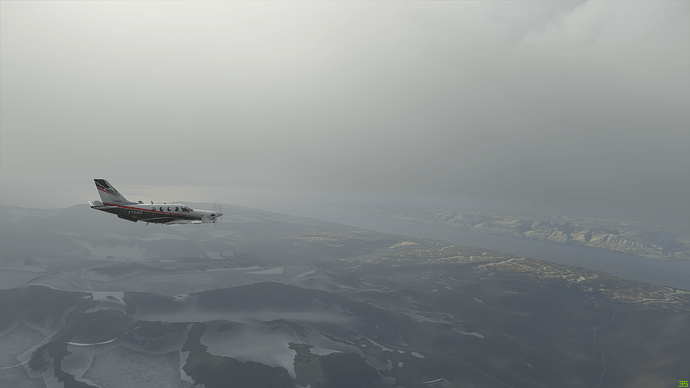 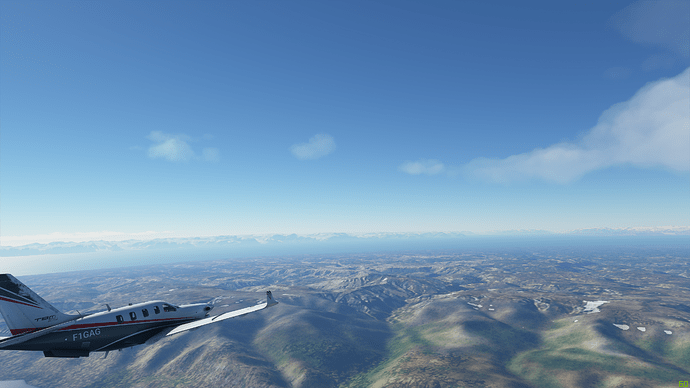 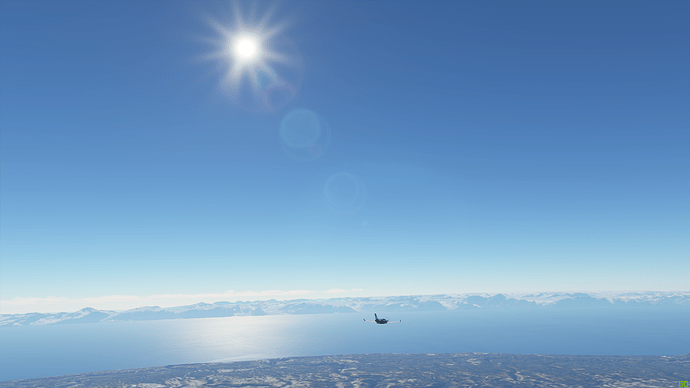 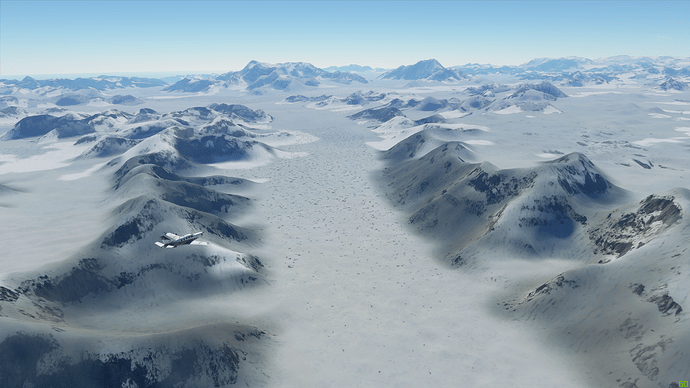 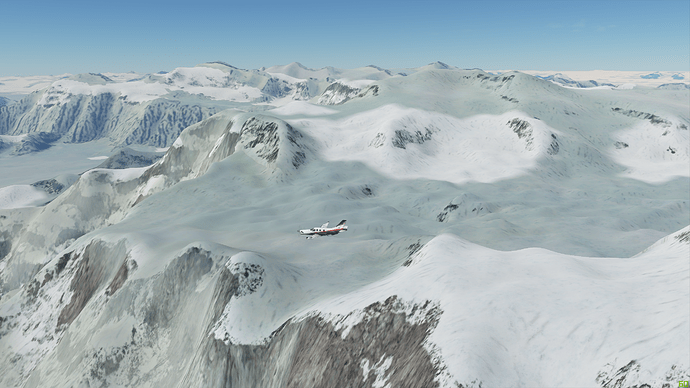 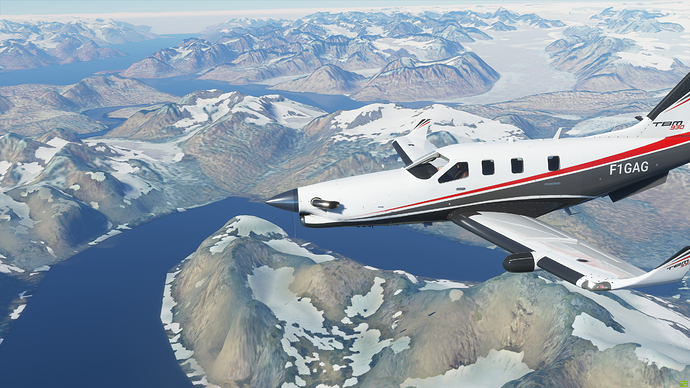 Where did you land in Greenland? BGBW isn’t on the map in MSFS. Ask me how I landed there anyway today

HI! Plan is to land at Kulusuk today (ran out of time last night) - this is BGKK. Google maps (sorry Bing) shows that it’s not much more than a landing strip with a car park, so we’ll see what the ground services are like!!

next is that long-long strip across a pond to get Canada (I assume). That was a slog for me - did it in real-time and AutoPilot

I’m now at Washington - I tried an automated ILS approach (trying to learn GPS100) and it worked just fine.
A bit of a detour next from Washington to Chicago - think that’s one of the enhanced ones.

cool. Not tried an autopilot landing yet…

Landed in Greenland tonight - at BGKK (Kulusuk). Nothing more than a strip of concrete, but still stunning views. Unfortunately no ground services…so looks like the magic fuel top up will be needed via the main menu! Next leg is round the Southern tip of Greenland and up the Western coast - and then across to Canada, aiming for Iqaluit (CYFB). More on that later! 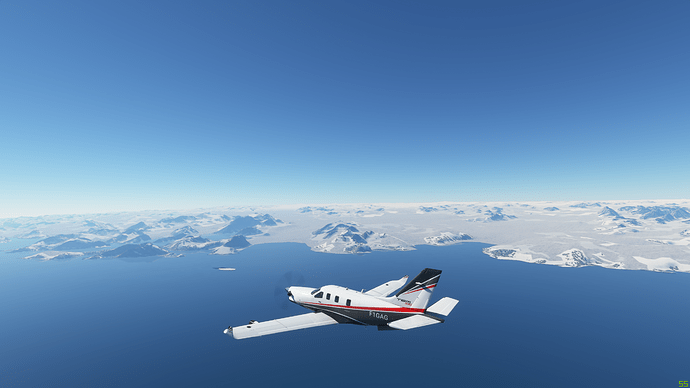 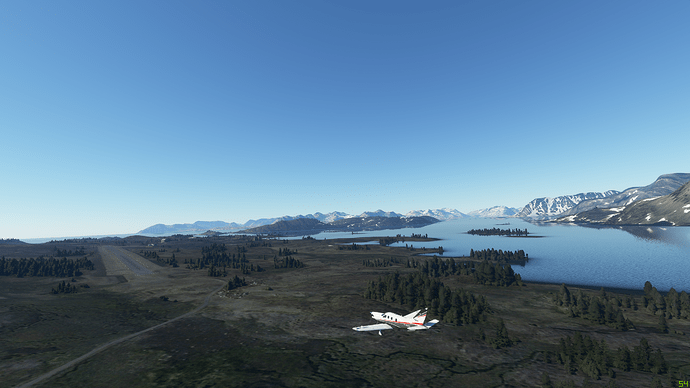 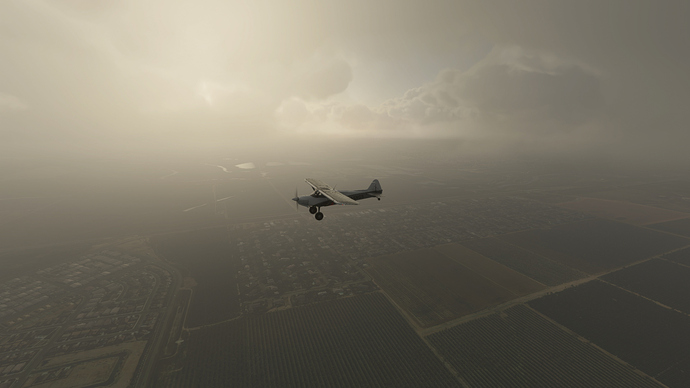 This is using real-time weather, just outside Fresno.

Loved your post @gordongreig!
What a unbelievable beauty.
Gonna check out myself these landscapes!
Cheers!

Awesome pic. I’m using real tiem weather too - although I am finding that when I save and reload, the weather does seem to default to clear skies. If I start the flight fresh, the weather seems more variable. It does, however change from place to place as I travel long distances