Hi,
Most of the lakes I have landed on have these defects on the surface. Trying to cross it ends in a collision with “something”.
Do you see these artefacts on water surfaces too? 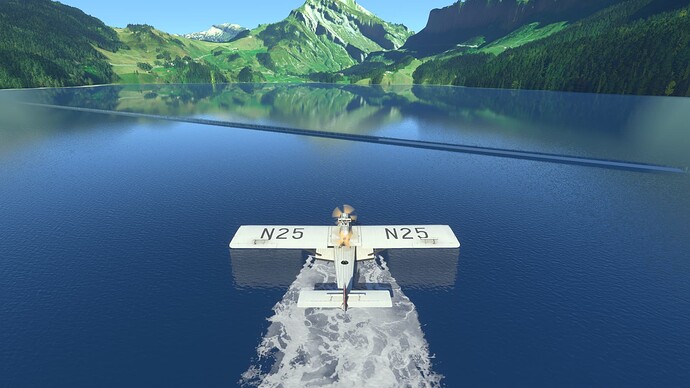 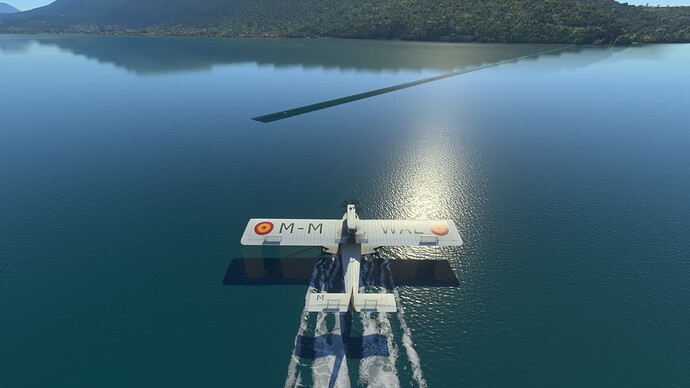 Do you see these artefacts on water surfaces too?

Yes. You can file a bug and include the GPS coordinates or precise location on the VFR map. However, the places that might get the most attention are official water runways.

I created bug on Zendesk 2 months ago. They mark it as “resolved” but it is really not resolved.

Resolved just means the bug has been filed internally, e.g. put on the list of thousands of other bugs with different priorities of fixing.

This seems to happen whenever there´s any kind of terrain gradient in the lake basin because I have seen that in many places worldwide so this is not a bug localized at some areas. As water area is filled with water tiles they appear to follow the same reference value (the basin depth) and results in this atrocious chessboard with tiles placed at different heights whenever they are located at that gradient.

Most bodies of water have these issues. One of the many bugs in the sim that will probably never be fixed.

I think it’s just a pitfall with the way the world is rendered in MSFS as polygonal tiles. At what point does land begin and lake start? What if the terrain mesh indicates a lake starts somewhere and the satellite imagery indicates otherwise? And what if the mesh doesn’t actually show the like as flat, but rather indicates a curve?

What if there’s a discontinuity in the height map in the mesh in the middle of the lake?

There’s no good AI-generated answer for those problems. I think that would be a good problem for Blueshark to tackle.

I’ve seen these on oceans too, not just lakes.

I think none of that matters, at the very least just make sure each tile and mesh edge joins up properly with its neighbour and we wont see this sort of thing.

Yeah, this is just part of an ongoing issue with the way the sim renders terrain generally. In the first year or so after the sim launched, I saw them EVERYWHERE - water, mountains and hills, and most disastrously, on many airport runways. Most of the time they resolve as you approach them (if you’re moving slowly enough) or if you change your viewing angles, look away and then back, etc., but not always. This was a really big deal when the cracks appeared all over runways before V1 or during your landing rollout.

In one of the Sim Updates, Asobo made some kind of change in the rendering priority and I stopped seeing disastrous runway cracks all over the place, though I still occasionally see them in water areas and rarely along a mount ridge.

I can accept graphic issues.
But problem is that I can not pass these artefacts on water.
One time I saw it on taxiway… I was rolling on CDG airport and bang - half a meter height step on taxiway = damaged landing gear, game over. Thank you Asobo.

That would be up on a taxiway in the NW corner of the airport, correct?

Why fix them one by one?
And not find the root cause and fix this?

I agree, but don’t ask me, ask Asobo

Why fix them one by one?
And not find the root cause and fix this?

Because there are apparently two different root causes (at least). One is purely a rendering speed issue, where the cracks and terrain discontinuities “heal” themselves after a moment once all the correct and necessary data has streamed in.

The other cause is when there is a literal discontinuity in the terrain elevation data, probably due to bad data in the info provided to Asobo and rendered as terrain. The sim doesn’t have a human being looking at every tile of terrain for obvious errors - for all the rendering engine knows, there might well be a dam or structure wall somewhere when you see something like that.

That’s why you should post a formal Zendesk bug report so they can evaluate the area for corrupt or plainly-bad data and correct it. That’s the best bet to eventually getting specific areas fixed.

Have a close look at these “watersteps”. There is a hole between the upper and lower layer of water. You can look through. Through a dam you cannot look through, there is a texture on it. Because the dams surface is made of planes, each defined by 3 vertices.
On the “waterstep” ther is no connection between the vertices.
Asobo could, more or less simply, learn an AI to look for such holes in waterbodies. Once a hole is found, get the distance between the upper and the lower vertices and lower the upper vertice by half of the delta and do the same on the lower vertices vice versa. Then connect them.