Up to about a week ago I thought the sim was getting better at this,

I typically don’t use default ATC as it’s just bad and normally use Pilot2ATC. But I have used it several times through the SU10 beta because stuff like this needs to be tested.

I’ve noticed no change. I’m still getting completely wrong runway assignments for departures and landings with with AI planes (live traffic) being directed to the correct ones - sometimes the opposite end of the runway that I’m being told to use. For example, there’s active traffic taking off and landing on 09 while I’m being told to land on 27.

Me too! ATC clears me to land with the wind pushing me from my tail rather than landing into the wind head on . I have ai taking off the correct side of runway while I’m landing with wind at my tail . Frustrating

What I have noted, and perhaps this has been mentioned here, is that if you set up a flight plan when the departing and arriving airports have not loaded their current weather data, you will be assigned to some default runway selection. This selection will, potentially, be wrong for the actual wind conditions once real-time weather loads.

If you’ve set up a VFR plan, then you’ve essentially locked yourself into the runways as setup by the flight plan. If you are lucky you can request an alternate runway, but I rarely see this as an option at controlled airports. IFR seems to work better, but it can also be screwy.

I’m finding that I have to make sure I zoom to details and/or wait and make sure that the wind direction & speed are not displayed as “—“ for my departing and arriving airports in order to circumvent these incorrect assignments.

It is this way right now: if you set up a flightplan and MSFS determines a specific runway (according to the actual wind situation at dest), ATC will stick to that runway MSFS has chosen at the beginning - even if you keep all landing procedures to ‘automatic’ in the world map or if the wind has changed, when you approach the dest. MSFS just doesn’t like change.

You can select automatic runway in the flightplaner.
If you select a specific one you will get that one, no matter what the wind is

And you also will get the one MSFS chooses for landing at the beginning of the flight (no matter what winds are when you arrive), even if you use ‘automatic’. That’s the main problem.

Flew to Lanzarote. At departure the wind was right across to the rwy, slightly tending for rwy 21 approach. Approach was set to ‘automatic’.
Near the island, a Ryanair was a few miles ahead of me, also approaching Lanzarote (live traffic). The wind changed slightly, tending a bit more to rwy 03 appr. During approach ATC still gave me 21. I took it (since the wind was just slightly from behind) and landed on rwy 21. But the Ryanair (before me) came in after me on rwy 03, cause she got the correct rwy. Really stupid.

Tried this on last couple of flights, seemed to work okay. Will continue using this tip until it gets sorted properly - if ever!

Over the past several months I have confirmed that choosing the runway with the headwind in the World Map before starting the flight almost always results in ATC telling me to land on that runway.

In addition, if I also change the arrival from that runway to a ramp or gate, the World Map will still show the landing with the headwind and ATC will still direct me to land on that runway.

Arrival ground control still sends me to some random ramp or gate instead of my selected ramp or gate ever since SU6, but that is a matter for a different thread.

The big deal is that you have to still do stupid work arounds.
Even after SU10 or what ever this was just now.
If you buy a car and you have to park on a hill every time so you can let it roll to a start because the starter doesn’t work, you have a work around, that probably works most of the time.
But are you going to leave it like that ??

What I find “amusing” is when ATIS advises a runway direction that is correct and Air Traffic points you at the opposite end or a different runway entirely.

Now, with FSLTL and more live traffic on the way, I get very often the ATC bug, only hearing my (my copilots) voice and no other radio voice anymore. I suspect AZURE is a bit overwhelmed with handling a real amount of traffic.

Since yesterday, the ATC is totally mute. I can see all the communication messages, but the only speaking sound I hear is “my” replies. Any other radion sound is mute (ATC and other communication with other planes). I don’t have any sound mods installed, not atc mods, the atc is turned on, sound is on. How do you fix this? It became mute by itself just like that.

[Release-Notes-Banner] RELEASE NOTES 1.29.22.0 If you are playing on PC, some packages in your community folder may not have been updated and, as a result, may have an unexpected impact on the title’s performance and behavior. Please move your community package(s) to another folder before relaunching the title if you suffer from stability issues or long loading times. New Features Live traffic has been updated with various quality of life fixes (details below) New memory fragmenta…

One of the “Navigation/Traffic” item that is supposed to be addressed in SU11 points to this thread. 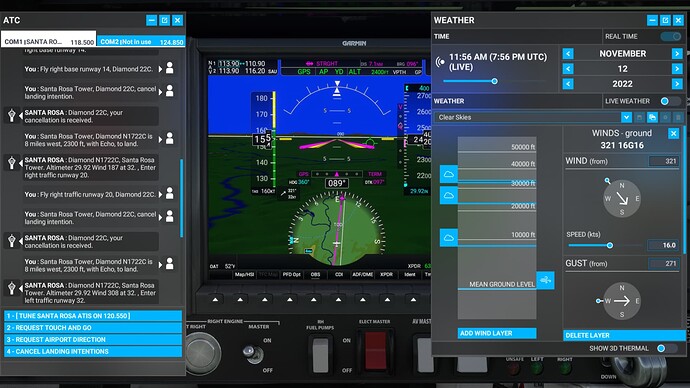 Release note was specifying it has been fixed for “live traffic” but it is great if it works for you. Maybe it is only for landing instructions then and applies for both live and user own traffic ?

In my case issue has not been fixed for take off instructions (did not test landing). Using LFAT, setting-up strong wind from 310, ATC always instruct me to use runway 13 where I should be instructed to use runway 31.
So hopefully more users will post there results here, making the distinction between landing and departing instructions.

Edit: issue fixed for LFAT airport, I am using a custom scene and root cause was an incorrect parameter that the developer corrected, after that ATC/ATIS are assigning the correct runway depending on wind direction.