I noticed that all the doors open when you select them on the handles inside/outside without switches. But yes a bug.
I love the bright wing lighting for landing in remote unlit airfields.

The scary copilot behind me scared the heck out of me when i first saw her.
The two suitcases in the rear hold are a nice touch. Would love a freight model varient for the Islander.

it is NOT A CO PILOT, Just A Passenger
and can EASILY BE REMOVED By Taking the weight out of that seat

How? I can’t do it walking around or from drone cam.

Select the handles from camera views, hover over with curser tool.
Same way as the left side window opens.

It won’t let me select them - I’ve remapped my quick views and just use free look.

Never been able to open the window either

On the ground? As the doors are locked in flight.
No idea why yours is different from mine.
My engines were off when I opened them.

Aircraft developer BlackBox Simulation has released its BN2 Islander for Microsoft Flight Simulator. Over 750 of the aircraft type is still operating today thanks to the versatility of the aircraft

Me too, maybe I’ll try reinstalling??

I found the issue I think.

I have noticed on purchase we were offered 3 aircraft varients, and several different liveries.
3 different Aircraft Variants, The base BN2-2A-2, The BN2B-20 with pointy nose and shorter engine intakes and one Militarised for Maltese Armed Forces.

I only have one model showing in the hanger.
However there are 21 liveries available from which I found the pointy nose air force version, and base model variant.

Anyway, I have been using the British Airways model and the doors open.
I chose the military model and they did not open by selecting handles.

Incidentally, I also presumed that the varients would be installed in the hanger and not under liveries. But we have them all.
I am not going to test all the other liveries, maybe other people on the forum can help test, I don’t know.

This was unusual, as the Mb339A by IndiaFoxEcho had 3 aircraft varients installed in the hanger.

Ah, that makes sense - I haven’t tried the doors each time, but I’ve been loading up a different livery with each flight.

I can see why remote excursion bush flyers love this thing - easily buttered a grass strip in under 400’. I find it much more tame at low speeds than the grand caravan and the wide wheel base is awesome.

Please ignore my leaning comment from above - I found the egt gauge hidden behind the yoke - well done on the systems modeling!

This was a fun approach in southern Washington! Bought it yesterday, very nice to hand fly and great sounding engines though I’m a little disappointed with some of the poor interior textures. The prop spinner, engine air intake textures, door frames and panelling are particularly noticable when sitting in the cockpit.

A modest improvement in texture resolution would definitely elevate the product. Are there any plans to give the textures and to a lesser extent the general model quality a tune-up at some point?

Also noticed the ammeter selector doesn’t seem to do anything and potentially the turn and bank indicator is not reading right?

I can’t seem to get the thing to indicate a standard rate turn. Even banked 40 deg the bank indicator sits half way between the level and standard turn indicators. Maybe I’m misunderstanding the way this is implemented?

Otherwise it’s a fun little plane to fly and I have to say again the engine sounds are really lovely and a highlight of the product. 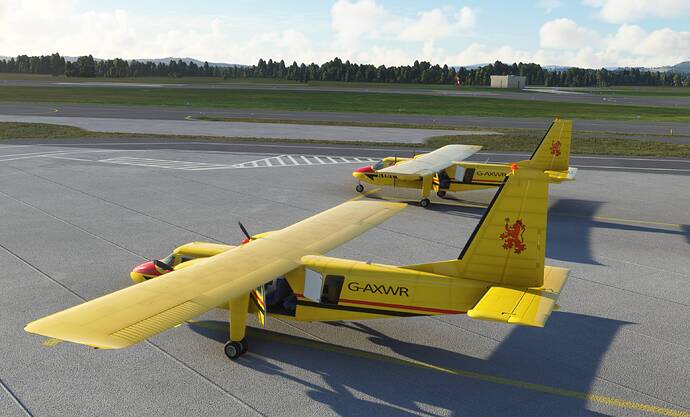 Thank you,
Don’t think that would work for loganair, I am using xbox x.

I would also like to own the Loganair livery.

I would also like to own the Loganair livery.

✓ Britten-Norman BN-2 Islander Loganair Blue is a Microsoft Flight Simulator 2020 mod created by Donka. Download for free to enhance your experience in MSFS 2020.

Oh. Its for the pc version.
I am on Xbox. That’s a shame its not included.

I purchased the Islander a few days ago on the marketplace and I agree that it’s a very smooth and reliable plane to fly with.
I’ve met a problem with the altimeter calib knot, 3 times out of 4, when I click on the knob to change the pressure, the knob turns wildly counter-clockwise to some value as low as 27.xx Hg inches without being able to stop it. When AP is engaged and ALT set, this leads to a demential climb rate leading to stall.
It’s even worse when using the mousewheel.
This is the first plane that makes this trick, it’s rather boring and as I don’t like to use keyboards shorcuts to set the altimeter, it turns to be some kind of an issue.
Other then that, due to marketplace purchase, no kind of apron.flt to set values for cold & dark startup.
I hate entering the cockpit to find some rockers/switches already preset (tanks switches, fuel valves), I’m old enough to turn them on myself.