This aircraft looks like fun but I’m guessing the aircraft can only taxi in a straight line because steering systems didn’t exist at the dawn of flight? I’m indecisive on whether I’d use it more than once to cross the channel from France to England and back. Is it fun? Opinions?

It’s A LOT of fun. This is the only aircraft though where I’d certainly recommend NOT taxiing.

The RIP version has no ground steering and you need to use slew mode to position the plane on the ground. The other two included versions do provide ground steering for convenience.

I just picked it up today because of the sale, first flight was a lot of fun. I can see it easily being something I would go to occasionally for a change of pace.

This is always a favorite for me for taking screen shots in olde timey places.

I find I’ve gotten enough enjoyment out of it I feel it was worth purchasing at full price and fiddling with from time to time as a treat, though it’s certainly not a go-to for any sort of cross-country trip.

Picked this up yesterday and I like it a lot. Well packaged and made with care and love, the period manual is a brilliant inclusion. Flying it is hell, I tried a few flights from grass fields in southern England, the wind picked me up and I didn’t really have much say after that. It’s definitely something you’ll need to read the manual for but so far it’s a unique experience in the FS world. Well worth the current price. Thank you, Wing42!

EDIT: had time to read through the manuals thoroughly and play around with that engine on/off level flight mechanic. It’s hard work, I’ll be some time before switching off the HUD and trusting my own instincts on the rpm, but this is an unexpectedly great expansion of the FS experience. I’m not much of an aviation geek so most of the dlc aircraft don’t interest me much, I’m fine with switching between the Cessnas and Airbus. But I will say, this seems a must-buy in this sale. Something totally new that will give you a little taste of the exhilarating terror those pioneers must have felt.

Thanks. I’m so glad I got it. I use the longer range one that has steering. I still had trouble crossing the Anglais channel to France. The slightest crosswind would force the plane to do a steep turn in the opposite direction.

The Bleriot XI was used in lots of famous flights other than the channel crossing.
I think somebody here posted a link to a flight by a woman over the Alps which gained some news, and records I believe.

“Unlearn what you know about conventional flight”: Mikael Carlson on flying the Bleriot XI

Flew the higher power version around paris in vr. Pretty magical but it kept wanted to climb so much I had to hold continuous forward pressure on the elevator to get it to fly straight/ periodically turn the engine off to get it to lose altitude. The throttle didn’t seem to do much.

Just flew the Anzani RIP version over the Channel with a 22 knot head/cross-wind over water. The wind coming over and down the Dover cliffs caught me in a downdraft three times forcing me to turn around and try to gain altitude to clear the cliffs.

I finally made it over land and was fortunate to find the airport runway I had selected was pointing directly into the wind. Because of the headwind, my approach was at 10 knots ground speed increasing to 20 when I got about 50-100ft AGL as the headwind declined to 10 knots.

I made a nice soft landing, took my hand off the joystick and feet off the rudder pedal for the first time in 1 and a half hours (for a 30 nautical mile flight) and felt utterly exhilarated.

I think a trip over the Alps in the Gnome is next!

I had no idea I’d enjoy the Bleriot as much as I do.

Yeh, the altitude management is in shutting off the engine for long enough to sink but not so long as to not be able to restart it, as far as I can tell. It’s absolutely a hands-on flight!

For sightseeing, the Anzani is good if there is no terrain to fly into. Reducing throttle actually results in a slow descent.

I took the Gnome version sightseeing, in Copenhagen I think, and it climbed and climbed I could never figure out how to set it up to stop the climb without cutting the magneto, I finally pushed the joystick down, put it into a shallow dive, got to about 60 knots, and she broke up on me. I’ll try to figure out the Gnome next.

The RIP version is challenging but quite fun. The wing warping does not have a lot of authority when compared with an aileron so usually you are better initiating a bank with a solid kick of rudder rather than relying on just stick.

Be warned the RIP version can take up to 10 minutes to gain circuit height of 1000’ it does climb but very very slowly.

The gnome version is a little more practical. I like to fly it out of the LFKL Brindas marketplace airfield (shortest runway in Europe apparently) as it has Fench dairy cows and hot balloons which add to the retro historic feel. 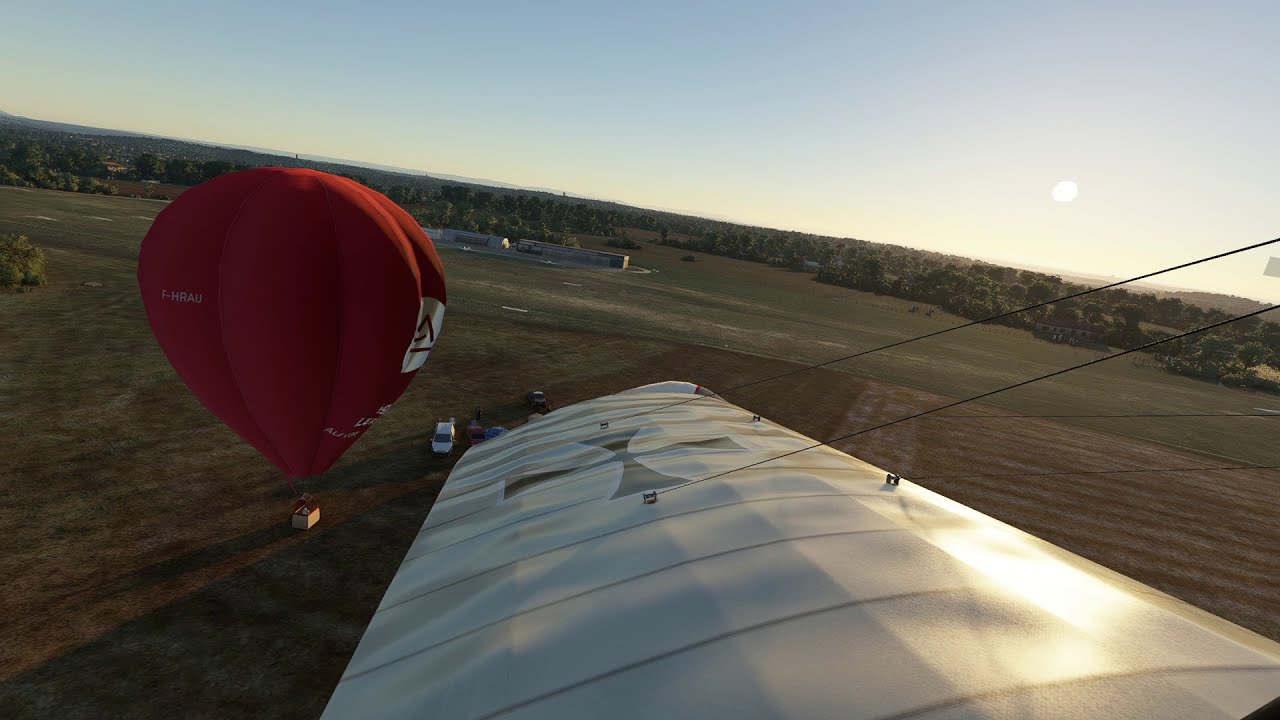 Don’t know about the Bleriot, but e.g. on the Avro 504 it was also either full throttle or off.
Nothing in between.

the Gnome engine has a throttle and mixture control, but I haven’t figured out how to reduce thrust enough to level out. The Anzani flies level at 80-85% throttle on my controller and slowly descends at any setting lower than that.

The first time I ever thought I might buy the Bleriot was after watching that excellent video.

The Gnome engine I know has no throttle control. The engine is throttled with the ignition system and can only run 1/8, 1/4, 1/2 and full speed. For ground manoeuvring you’ll need to use the “blip” switch and toggle the ignition ON and OFF in order to not take-off during taxi

. Maybe there are versions of the Gnome I’m not aware of though…

I don’t know anything about it other than the manual, which describes it thusly;

“In practice, you can use the air control (throttle) and for the Gnome engine the fuel control (mixture)
to slow the engine down, however the effectiveness of those controls is limited, as it is in the realworld counterparts. So do what pilots from the 1910s did and use the ignition switch to slow down
the engine!”

So I know you need to play with ignition to slow down, and in particular land, but I’m wondering if I can find a setting that will allow level flight. I’m workin’ on it!