I‘d like to add that this is not reduced to the cockpit but also in outside view it’s visible when looking up and down, especially with dark clouds it’s prominent.

I think it’s the same as this one?

Is there a way to turn off the camera auto exposure in VR?

Asobo needs to turn off this ‘auto-exposure’ feature whether in 2D or 3D. The human eye does not operate quite like that, and though they are trying to simulate glare , the world does not grow dark when looking at a bright light source ( unless you are a low quality camera lens)

Sounds like this is something that would only truly be useful if you had eye tracking. Head tracking (conventional VR headsets) don’t quite work the same way

The same problem with this same feature exists in the ETS2/ATS simulator.
much more troublesome in VR, depending on the position of the driver the sky seems to wash out permanently if the gaze is too low

I appreciate the thinking behind this feature, but in VR it is often annoying and even immersion killing. It’s sort of OK when looking ahead up and down, but in open cockpit biplanes say, both on the ground and in the air, just looking around sideways, it forces you to keep you head level, or the scenery darkens or lightens unrealistically. I find it very distracting and constraining at times. I suppose one could get used to it, but for now I’d prefer more control options, or just and on off switch until we figure it out better.

I went back to SU9 for a few hours the other day and much preferred its existing implementation of no auto-exposure. Asobo, please allow us to turn off this new feature via settings in the final release of SU10.

Photographer here. Before this beta the game had calculated exposure with an average of the entire FOV. If you were in a plane with a smaller windsheild you could only see overexposed sky because the dark interior overwhelmed the average. Now it’s using more of a spot meter in the center of the screen which is a step in the right direction, but the transition time is WAYYYY TOO fast. A slight wobble of the head swings the exposure several stops between over and under exposure within milliseconds.

Our real eyes adjust exposure too, come inside from being outside on a sunny day and you’re blind for a while. It takes TIME for our eyes to adapt to changes in exposure. In fact it can take anywhere from 10-30 minutes to fully adapt. Our pupils can change size much faster on the order of seconds.

The very obvious fix for VR is to put in a slider to change the auto exposure time to something reasonable, maybe from 1 second to several minutes so everyone can find their sweet spot. Personally, I think about 10 seconds would be ideal. Implement a SLOW auto-exposure mode.

If you were in a plane with a smaller windsheild you could only see overexposed sky because the dark interior overwhelmed the average.

Well said. This was annoying. Now it is much better.

but the transition time is WAYYYY TOO fast

I do not concur, as the human eye would also be very fast. Imagine you look down in your car on your gauges or something in the dark and then back out into the bright world through the windshield. If this always would last 10 seconds to accomodate your eyes, it would be impossible to drive a car without accidents. So i think the fast auto-exposure is just right. I think it should be a time somewhere beween 10…1000ms, ideally selectable by a slider. And this slider could also go up to 10000ms (because someone could like it) if it is possible to dial in values under 1000ms.

I’m in a car on a very sunny day right now, it’s very quick to the eye and not the painfully slow version in SU10 so yes it needs to be much much faster, barely noticeable infact (to my eyes at least).

This is causing the ground to be unrealistically dark when flying or taxing early or late in the day. It makes twilight near unusable, which had been my favorite time to fly in the sim.

The center spot metering is terrible. There is nothing natural or good about this effect.

I’m not in the Beta but why don’t they just get rid of autoexposure for VR? I mean, our eyes don’t act like a camera, this option seems useless to me in VR. They’ll never find a good setting.

That said, I’m glad they kinda fixed it because in a C152, the sky always looked completely white which was very annoying.

If THIS doesn’t happen anymore, this is great: 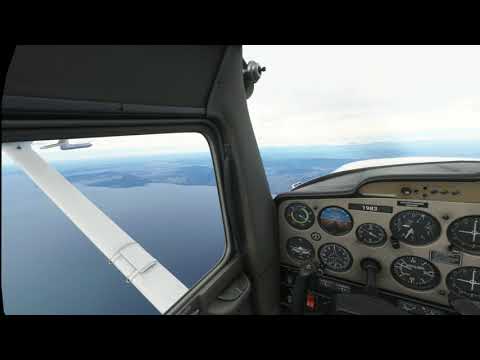 An ON/OFF toggle and/or a slider and everybody would be happy though.

That said, I’m glad they kinda fixed it

No doubt. Your video reminded me of what it was like prior to SU10 beta. Horrible. It really is great to have blue skies now. You should join the beta. I don’t find any downsides to it. Only positives. Nothing has gotten worse from my perspective. Of course things still need work but it’s definitely a big improvement if only for the blue skies in VR.

For your first question why they dont get rid of autoexposure: i think this is because they model the real world with the real light intensities. And then you have a huge contrast between very bright from direct sunlight to very dark in the shadow. It is impossible to display this with the current VR Headsets. This would at least need HDR VR Headsets, but they will perhaps never be as bright as the sun. So you have to map the brightness into your possible 0…255 values in the headset and for this you have to look at the brightest pixel in an area which then gets the 255. If you dont do this, you will only see too bright or too dark regions.

The behaviour seen in your video is completely fixed, so i am a big fan of the new algorithm!! I hope we can use it in the official SU10 also. So it would be nice to have positive comments here too. Best / easiest solution to make most of us happy would be a switch between old or new algorithm.

You should join the beta.

I can’t, I sold my 3090 before its price drops too much and am waiting for the next gen now.
I’m running a modest GTX 770 until then

I sold my 3090 before its price drops too much

I have a 6900xt and have asked myself when is the right time to sell it. Most likely I’ll be upgrading too if the rumors are correct about the speed gains in the next gen of cards. I think it’s going to be a long wait until they’re available though so I’m holding out for now. With these blue skies, flying in VR is just too much fun

The behaviour seen in your video is completely fixed, so i am a big fan of the new algorithm!! I hope we can use it in the official SU10 also. So it would be nice to have positive comments here too. Best / easiest solution to make most of us happy would be a switch between old or new algorithm.

Have you flown at sunrise/sunset? You can see the ground in peripheral vision, then it just fades to black when you look outside.

Have you used strobe lights and watched the sky cycle between dark and light between flashes? It’s out of sync with the strobe lights given the delay.