Did a search and could not find any information on lake bridges. Tried to land bell 407 on lake Sam Rayburn bridge and I sunk into bridge like wet cement. Notice cars also going underneath bridge like road is just below water level. When trying to go under bridge with a float plane I hit something like invisible road just beneath the water level. May be why cars keep going under bridges across fresh water lakes. This didn’t happen until after some of the updates. Maybe the AI will get this fixed soon

Cosmetic only bridges are very common. I’m trying to think if there are any bridges that have road traffic on their decks, even third party ones.

It must be recent.
I checked the Venice bridge where I remember following cars and, strangely, there is no traffic anymore.
All cars are turning away before going to the bridge.

Maybe, Asobo/Microsoft decided that instead of having cars going into the water (like it did in many cases), they just prevented the issue to happen by not having cars on bridges anymore.

The bridge thing has been there since day one as far as I know.

Okay, you made me look!

Normally, I prefer flying UNDER bridges …

Many bridges have road traffic - it depends on how complicated the superstructure is. The first bridge you encounter in the Tokyo scenario has a very complicated superstructure, so cars only get to the first support pier, then fade out.

The San Francisco scenario, the cars cross the full bridge.

The first bridge you encounter in the Montreal scenario, not even any traffic on the approaches, though the next ones do have traffic/

Hint: pause near a bridge - traffic continues to flow, making it easy to capture screen shots with traffic. But you generally have to fly low.

“Pics or it didn’t happen”

My guess is that some bridges don’t have traffic because others do, and it’s not necessary to devote resources to ALL bridges having traffic.

Viaducts may or may not have traffic even though they don’t have complicated superstructures, for the above reason.

Bridges - it depends, I guess. San Francisco, some Tokyo bridges and viaducts have traffic, others don’t. YMMV.

But there is definitely bridge traffic in the sim. To find out if your chosen bridge has traffic, get below 500 feet and hit pause - traffic will continue if there is any.

Okay I should have said some bridges. Some are ok. here is screen shot of landing on bridge…will fall through if not in hover. 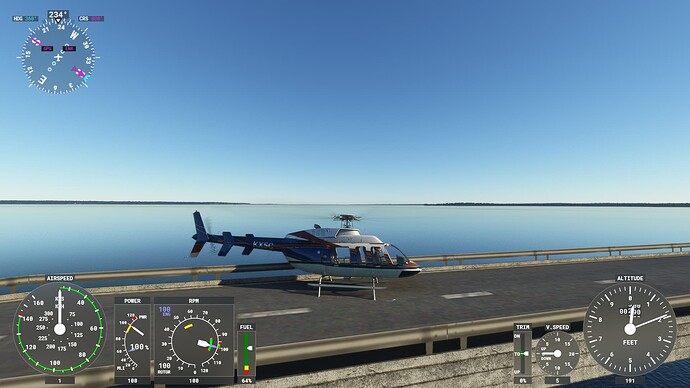 They’ve also got to fix the multiple “cracks in the planet” where there’s a large, long, straight crack visible where two pieces of photometric data just aren’t joined properly. There’s one right down from my street - kind of a downer when you want to show others how cool the sim is.

We’re the enthusiasts - we spend the $$$ to do it right. Others, seeing us, might realize they already have an Xbox and decide to give it a whirl - or even BUY a newer Xbox as an upgrade. But we’re the ones who are going to help drive the next 10 million simmers, because seeing - and trying it out outside a store - is believing.

Toronto’s alien invasion, with buildings all over the place melted, and the CN Tower with an alien facehugger attached to it, and all the roads underwater, is entertaining - but I don’t live in Canada’s largest city, so I can afford to laugh.

I’m not sure if AI ground vehicles have the same physics as a player aircraft. If you can land on something, does that mean the an AI car can drive over it? I’m not sure it does.

Just guessing at the scope of such sanity-checks, it would be a major undertaking. I am glad they went with an AI approach that delivers an 86% solution for the planet rather than a 96% solution for a subset only. When I fly at 10k feet I don’t care about bridge traffic. When I fly low and slow, I do but then I remember how little I paid for a product of this scope and just cannot bring myself to complain.

It is a 10-year product cycle so maybe the budgets will allow for more attention given to this area at some point or maybe 3rd party developers will step in if Asobo clearly signals they won’t do it themselves.

I agree with you PacyFire. Don’t get me wrong, I’m not complaining but it would be nice to have traffic seem more realistic.

AND, it would be nice to have bridges WITHOUT missing spans (Interstate 10 in Pensacola, FL) and traffic flowing ON the bridge instead of UNDER the bridge or across the water where there are MISSING Bridges. Been this way since MSFS was released.

Maybe they figure with global warming, in a few years plenty of roads will be under water

There are tools for constructing objects in MSFS. The world is big. Asobo is few. We are many. Head over to Flightsim.to, find the feature request page, and ask for somebody to fix your favorite bridges, or learn how to do it yourself. There are/have been several people out there who are recreating bridges.

Traffic, I don’t think that can be fixed at this time. But at some point it will also be editable. The whole vehicle traffic thing needs to be rewritten anyway.

I tried to fix this bridge with google for msfs but couldn’t . The elevations seem wrong. Maybe someone else can help. water level seems to low.