Sounds like someone didn’t know what they were doing when they were filling in one or more [FLTSIM.x] sections in the aircraft.cfg file. What addon is this?

I would have to check if I also have these hex codes when I fly other aircraft.

Edit:
My callsign works a-okay. It’s the other aircraft that have issues with their callsign. I only use live AI traffic by Asobo. No mods there.

I am seeing the same thing. no mods. different airplanes.

On the last couple flights I’ve taken, weird callsigns have been intermixed with those that are normal in the ATC box. Anybody else experiencing these? 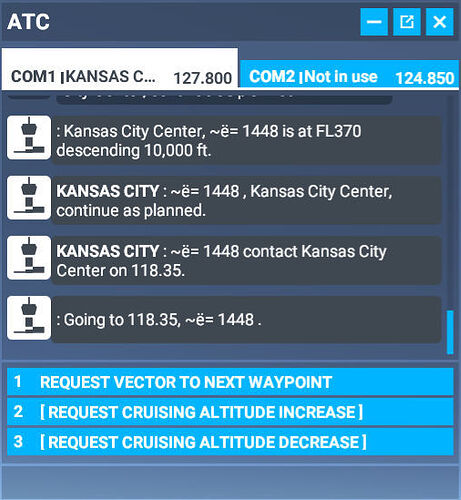 Yeah, have that too lately. Seems to be a new issue since WU4.

same for me too

Could you please check this or confirm it is a known issue?

It seems confirmed from different people. Have you also Zendesk this?

NB: to me, it looks like the simulator is sending wrong string data to the ATC window. I’ve seen similar issue in MP lately where the displayed player name had a numeral suffix, like #248

Given I’ve seen other reports where it looked like displaying similarly built numbers, I’d relate this to a bug where the simulator is sending a pointer to some memory instead of a pointer to the actual string chars (in C++).

Got the same issues, but let everybody who have this problem indeed also make a Zendesk message, otherwise it probably won’t make it into the next update 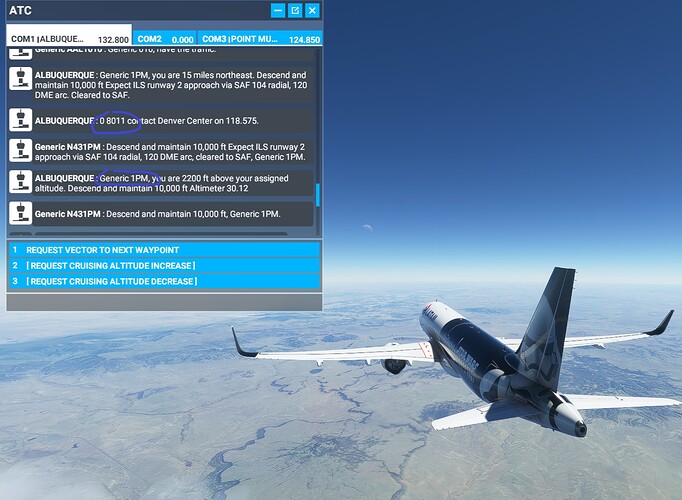 Thanks for the screenshots and details on this bug, I’ve sent it to the devs!

This has already been covered in ATC Bug after WU4. Please go vote there.

Hello everyone, thank you for your feedback. This bug has been acknowledged and logged by the team!

I’ve seen similar issue in MP lately where the displayed player name had a numeral suffix, like #248

That’s not a bug. Xbox player tags get a numerical suffix appended if there is more than one player using the same name.
Since I think the number is useless ingame and takes too much space, I filtered it in the JS script. But it seems like this was intentionally included since they totally could have filtered it as well.

Here’s a HowTo if anyone wants to get rid of the numbers as well:

For those who want to tweak their nameplates further, here’s a HowTo which I don’t want to provide as a standalone mod: Hide numeric value from gamertags XBox appends a # with a number to every gamertag that is not unique. Since it is mostly useless and makes the nameplates even longer, here’s how to remove them: Find the file Official\OneStore\fs-base-ui-pages\html_ui\Pages\InGameMarkers\Templates\IGM_AirTraffic.js and add the following lines after line 22: // remove number after gam…

Xbox player tags get a numerical suffix appended if there is more than one player using the same name.

How could this be ever possible? Can you actually have 2 different accounts with the same gamertag? ?!?

I should have been more clear though: the numerical suffix was unexpectedly long, and I shall have written something like #12345678 instead of #248. This is more the length of the suffix than the suffix itself which first attracted my attention in fact.

How could this be ever possible? Can you actually have 2 different accounts with the same gamertag?

Yes you can. Some games show only the name, some add the number since only with the number duplicate names are unique.
The first to use the name will always be shown without the number, but if anyone else wants to use the name, during the name change they will get informed about the #number being added and shown in some games which includes MSFS.

I think the number is exactly 4 digits long.
Maybe in your case there was another nameplate behind it and thus it looked like a longer number.

@Coppersens ok now I see what you’re talking about, thanks!

It might have been indeed, but there was an unusual number of them around me with # suffixes than I found this peculiar. Thank you for the explanations, this makes sense, and we know they’re onto it now so all is good!

Just like the number in my name. I want to get rid of it but I can’t.

I had one of those weird callsigns today for the first time: 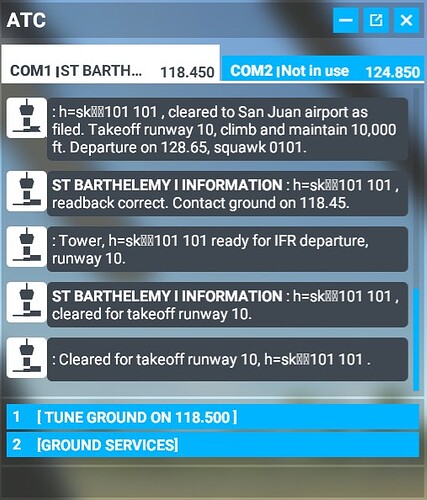