Anything over 30 is usable

Usable sure, not desirable. 60fps is the industry standard now , it was on PC for years, now latest gen consoles as well. I’ll be surprised if they target anything under 60 on the msfs xbox release.

I have a monitor to do glass cockpits, when I’m flying with the popouts , w an a320, into a custom airport …wew the framerate tanks

I make a copkit and can’t use!

I’ll PayPal the devs $30 tonight to fix this , it’s one of my biggest issues at the moment.
I’ve said it before but I wonder if, once a panel is popped out, that stopping it from drawing to the 3d cockpit would help save cycles. Bc right now when you pop out panels it continues to draw the same instruments in the cockpit as well as the 2d panel.
I pop out the a320 panels (4 of them) and man does that kill the performance like no other. I ended up moving from ultra to a mix of medium and high just to have the realism of my home cockpit

I’m running an Nvidia RTX 3090 across 3 monitors running at 1440 and am seeing a similar impact. I have a RealSimGear G1000 with both panels connected to my integrated GPU. I captured some numbers to illustrate the point. These were generated why flying through the desert to minimize any impact of scenery:

I have dev mode turned on and the FPS display up, and all scenarios are GPU limited. It seems crazy that I lose as much as 1/3 of my RTX 3090 to have instrument panels rendered on a different GPU!

I have a 5-monitor setup (3@1440 for the primary display driven using a Nvidia RTX 3090, 2@768 in my RealSimGear flight panels driven by the integrated Intel GPU). I have noticed that when I pop out the instrument PFD/MFD panels, my fps drops along with my GPU utilization on the primary display.

I ran some tests to quantify the impact. I ran the tests in the middle of the Nevada desert to minimize the variability of complex scenery. All tests are with graphics turned to “Ultra” and the Glass Cockpit Refresh Rate set to “low.” In all cases, the dev mode fps display tells me my framerate is limited by the GPU and the highest utilized core on my CPU stays below 70%.

It is surprising to me that popping out the PFD/MFD and having them displayed on a separate GPU/monitor cuts my RTX 3090 utilization by 33%! I would have expected zero impact given the popped-out panels are being rendered by a separate GPU.

It made me wonder if there was a way to disable the computation/updating and display of the instrument panels on the primary display and if so, if that would help counteract the impact of the secondary displays.

Same problem: I go from 30fps to 15fps when popping out a single 530 on my setup. The exact same setup with X-Plane works great (though that’s with Vulcan/Metal, so maybe we in MSFS2020 will have to wait for the move to DX12? …)

Yeah I dont fee like this is a huge priority so not expecting any kind of fix anytime soon.

Sending a toolbar panel to a new window causes a significant hit on the simulator’s framerate. Even a simple panel that shows only a few lines of text can drop the FPS by a whopping 20-25%. 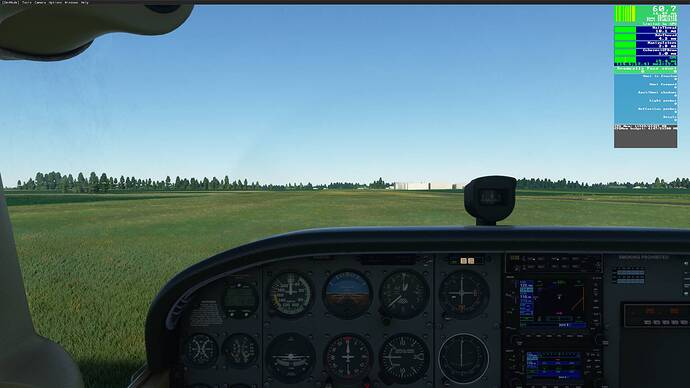 Opening the ATC panel and the sim holds stable at 60 fps: 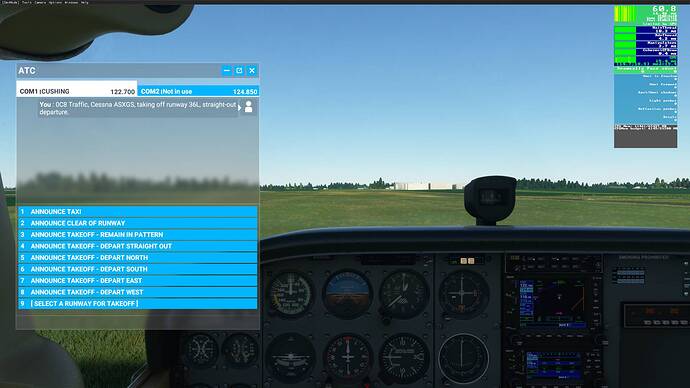 Undocking the ATC panel to a new window, however, causes the FPS to drop into the 40s: 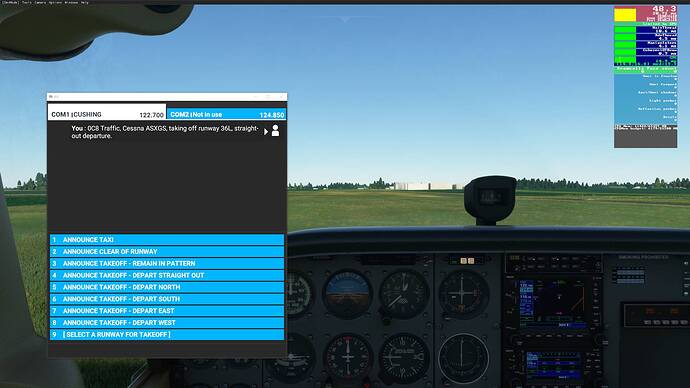 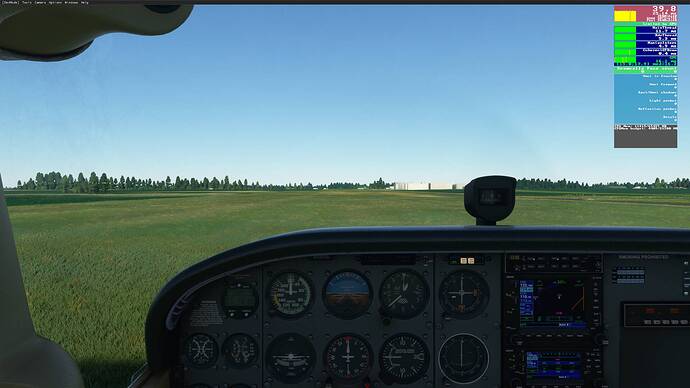 This issue has been reported elsewhere, usually in regards to breaking out an instrument from the panel, or the VFR map, but it seems there’s a more fundamental issue with the UI here and its lack of optimization so I’m bringing it up again. The undocked windows appear to be bogging down the main render loop unnecessarily, perhaps because the GPU is constantly and needlessly redrawing them along with the overhead of switching between the windows. Unlike other dynamic displays like instruments and moving maps, there’s not a good reason for this performance hit as these panels display just static text that’s sitting in an idle window for the most part.

Undocking would otherwise be a useful feature as I’d love to have these windows up on a second monitor instead of having to constantly open and close them, cluttering my main display while I’m flying. But it’s not worth the performance hit.

The game shows almost no hit on performance if the panels are contained within the main window, even if you clutter the whole screen with them, which is what I would expect when they’re undocked as well: 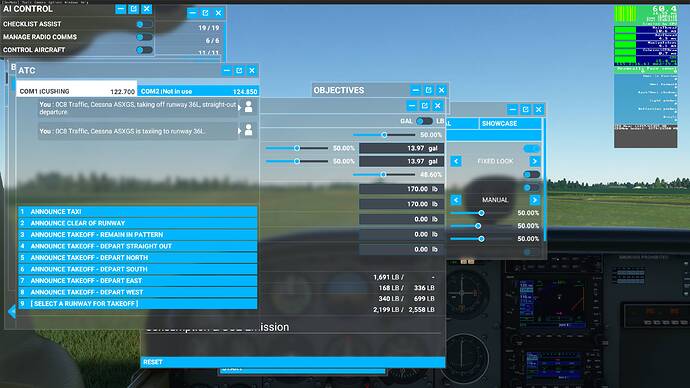 As the title says, I get a framerate drop of about 5-10 FPS when the ATC window is popped out on my second monitor. This doesn’t seem right to me. Is anyone else experiencing this?

Happens with any pop out window or instrument unfortunately
Normal behaviour

I’m sure you mean that this issue is always the case in this software for every user and every undocked window. But just to clarify, this issue should be treated as a bug, a correctable flaw in the programming, and not the expected and acceptable performance cost of undocking a window. The UI of this sim seems to be very much a WIP.

Normal behaviour in this sim

Is this a bug/correctable behaviour? I’m not sure tbh because I’m not programmer and don’t know what’s possible.

Is this a bug/correctable behaviour? I’m not sure tbh because I’m not programmer and don’t know what’s possible.

It definitely is. I’ve coded Direct3D apps that that have multiple interacting windows, and there are many ways to do it with little to no performance hit on the FPS in your 3D windows.

That’s why I wanted to bring it up again here. I think a lot of folks just assume that the simulator is working correctly (or good enough) and that the GPU must be doing something useful on these menu screens and tool panels, when it’s actually that the app is really badly optimized in places.

A side window with a few lines of text should cost the computer almost nothing, but that it instead bogs the main 3D display down by 10-15 fps is craaaazy. I’m surprised to see it in a title this large, where performance is so important. It makes me think the UI was just hastily thrown together.

Fantastic; I hope they fix this then as it stops me from poping out the Garmin windows to another widow or ipad

I can’t believe more people haven’t voted this up!

I have discovered that on my system something odd is going on.
I can pop out the window to a separate monitor with no FPS hit.
If I click the mouse in either the pop out or the main window, FPS tanks.
Kill Pop out, back to normal. BUT with plane on runway, if I make the pop out then increase thrust
using the mouse (I have 2 buttons configured for increase/decrease thrust), there is no drop off at all. I can get airborner, both panels operating with normal FPS. as soon as I left mouse click on a window to scroll round etc, frame rate tanks. So it’s not the popout itself that is causing the issue.

I’ve just come across this thread looking (and hoping) for a solution. I literally bought an extra monitor for this purpose, not for PFD/MFD, but just to get the ATC (which I always have open since I tend to lots of very short hops) out the way, and as a bonus, keep a VFR map open. But yeah, popping out a window costs me 15 FPS, down from 47-48 to 32-33.

I know 30+ is ‘fine’, but I’ve worked extraordinarily hard to OC my CPU/GPU and tweak settings to get it to a point where I’m finally happy with the FPS - I had no idea that popping out tools would have such an impact (I mean, perhaps like a couple of FPS, but really, I assumed it should be easier for the system since it hasn’t got to worry about the opacity of the window).

Further, I was actually limiting my FPS to 40 using nvidia control panel, so that I have performance headroom and reduce occasional stutters. But like that, pop out windows break it, with 1 open it goes to 20 FPS (40/2), with 2 open it goes to 13.5 (40/3), etc. Whoops!

Having removed the FPS cap, I now have the 15FPS drop, and seemingly 2 or 3 popout windows makes no further (or minimal) impact after the first one. Is there perhaps a way to limit the FPS of the popout windows to something like 5 FPS? I suspect it trying to maximise FPS on all windows is what’s causing the issue.

I do have navigraph, and so can use that on my 2nd monitor with less impact I guess, but the ATC … jeez, that’s the MAIN thing I wanted to break out

Ideally if I could get back my 40 FPS cap (it’s really nice!) and have that only limiting the main app, instead of limiting across all windows added together that’d be amazing. But for now, I’d live with a solution to the 15 FPS drop. Is there perhaps a separate ATC plugin I can use instead of the internal one, so like navigraph, I can use that instead on a separate monitor, and all would work nicely?

I have done a search but have not seen any decent solutions for this issue.
What would cause or is causing the issue when you pop out a window to another screen it causes between 7fps and 50% decrease in frame rate. IF I pop out a settings windows such as weather or camera it decreases by 5-7fps. Others in discord have tried the same thing with the same results. If you use an external app with sim connect no such fps hit is noticed (vfrmap or flight companion). 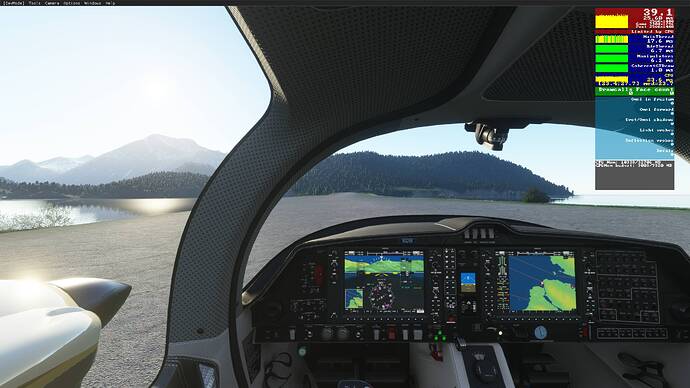 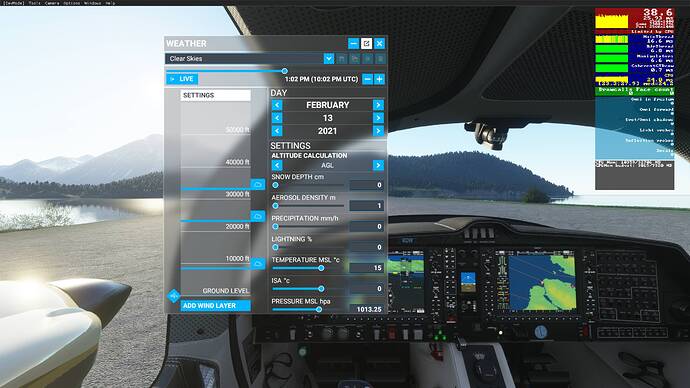 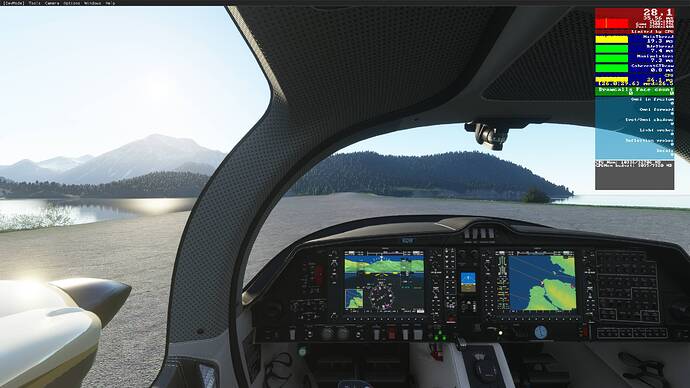 Not yet, want to see if a solution is there or others face the same issue.

Try using your graphics card’s frame counter. With an NVidia card, you would use the GeForce Experience overlay and enable the frame counter in the HUD section. That way you can get a frame count that is much less intrusive and won’t affect performance like Dev Mode can.

I would like to add in to addition to my thread we confirmed this across multiple computers. We have kind of come up with a theory that frame rate limiter is working on the external windows. So if you have like say 60fps then you pop out the window and it hits 45fps. Maybe it’s treating each window in a frame limit So not the window is running at several FPS and the main window gets subtracted from it.

We even went in and toggled V-sync and Frame limiters and all this to test if anything had an effect on the windows. Unfortunely nothing works.

It’s not really normal behaviour in most apps. Looks like i will be trying to keep all windows closed as much as possible and getting some kind of companion app that can control weather / time and camera. I have been using steam ■■■■ but there’s a few things that don’t work right or cant be mapped. But I am sure there is a solution to this FPS bug in the simulator.

I know when i stream the pop out windows are treated as separate screens or apps. It’s had when streaming because sometimes the main window has the Microsoft name and sometimes a pop out windows gets that mainthread name. SO theres something weird happening