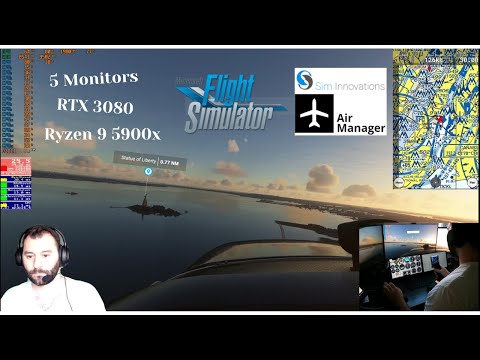 This doesn’t happen when using another program e.g chrome,Spotify etc. Only when opening the displays with right alt. Anyone else getting this?

may be because what we discussed here:

I have to use vsync couse i hate tearing. And i do not have a gsync monitor. If you undock the ATC, the FPS are halved. Why? Is there a fix for this?

happens in your case too and so, because of limit the fps to a v-sync step, the GPU is no longer in full load.

If you have VSync on in sim, it will mess with you in all kinds of ways when you undock any panel or instrument.

Actually, disabling v sync did nothing and in fact my fps and gpu usage are now going down in the cockpit and they weren’t before. Also this morning I did a flight with windows out and had no issues full gpu usage…

Hi,
If this is not the right place to open this topic my apologies.
I notice since the latest update when I pop the panels to drag them to a tablet my frames goes from 40 to 15 FPS.
Anyone encountered this issue for any chance?

I have encountered this issue. I think they know at least a bit about it, because in the dev updates they say they will address “multiple screens functionality” with sim update four, if my memory serves. I’m not sure if they specifically mean performance, but that’s what I’m hoping for as this issue is pretty annoying.
Also, its only been from the latest update for you? I’ve always had this issue but then again, you have much better specs than me so I’m not sure. Hope they can fix this!
Cheers.

I had this issue before,pretty much since the beginning to be honest.
Then for the last week or so was working fine,even the day I did the update I did a flight and was working good but last night I went to do another flight and the frames drop to 15 immediately.
This is very hard to understand,one day works good with a loss of maybe 5 FPS and now drops straight down to 15.
I even tried with the crj where I wasn’t having any issues at all and same thing,I haven’t changed any settings.
I’m lost when it comes to this.

Hi, im running a few displays, when I popout my PFD and ND and drag them to another monitor its halves my FPS from 40 to 20?, im using NVIDIA RTX2070 super, I dont recall this happening before? are there any fixes or will I have to live with it for now…I have vsync off and all monitor frq are the same.

thanks for any help!

Yep. The ATC Window, like the VFR Window, both are buggy. A well known fact for a long time. Both have my Com crash to desktop if I try to move either window. I get a friendly note telling me that the Graphics driver timed out {AMD}.

Not moving, or resizing, the Windows and everything is just fine. The game itself runs great on my Comp. Does anyone have a solution? I definitely have the latest AMD Driver; so this is not the problem.

No, this is not a new Bug Report, just a friendly plea for suggestions.

Hello
I have the same problem. If you open the ATC window on the same monitor, the frame rate is ok. If you then open the window on a second Montor, it collapses. For me this is 10 fps with version 1.15.10.0.
Greetings from Germany

they will address “multiple screens functionality” with sim update four,

That would be great!
My only other idea was if it were possible to edit aircraft configs to stop the sim from drawing the screens to the 3d cockpit , complete theory on my part I don’t know if it’s possible and that the popouts are linked .
In the a320 I turn off the FO’s displays but if you turn off the PIC screen it also powers down the popouts on my fourth monitor

I just discovered this as well. I have only one monitor; if the ATC window is off or popped somewhere on the screen, the frame rate is ok, if I pin it to the corner of my screen using the middle of the upper right window sizing icons (the open box with the arrow), I lose about 10 FPS.

Has anyone any ideas what this latest update has altered to make this game …because its fast not becoming a simulation of anything for me.

I have wasted so many hours trying to get things simply ok…its become more that simple frustration. Any advice from anyone who knows wghats going on re the panel popout issue would be welcome.

I’ve noticed worse frame rates as well after updating the sim and the fbw a320 when popping out panels. Seeing lower frames at all locations I’ve tried post update in the a320. I hope the big dx12 update addresses the panel draw issues…

The crj is a champ, that still has fantastic performance for me on my system. That hasn’t seen any difference for me. Been flying that most of the weekend because of it.

Hi there cheers for your thoughts …I only fly the a320 so didn’t think to try the pop out panel drop of frames with any other aircraft …so from what your saying it seems the prob is only maybe a flybywire issue …I will need to try some other planes tonight to see if that’s the case for me .
Cheers again
And happy safe flying
H

I’m running 4K on i10900K with RTX 3090 graphics card and have been able to popout all panels and still run smoothly before WU 5. I tested with resolution dropped down to 1080p and exactly the same happens, the sim hard locks at 15 fps.

I’ve seen rumors on this forum that one of the updates (i’m guessing post-xbox release) is going to offload the drawing of the displays to a separate thread, which I hope helps alleviate this issue. No matter what aircraft, the frame rate suffers if you’re popping out panels, but the CRJ seems to do the best on my system. If what I read was correct that’s due to the developers not using .js to draw the screens.

Ideally Asobo would have the 3D cockpit STOP drawing the screens in the 3D cockpit once popped out to a second screen if that is part of the issue going on here. I am assuming asking the thread to draw each display 2x is what is hurting. Taking an aircraft with 4 Captain displays to 8 once you duplicate them on a separate monitor (as with my setup I have a fourth display just to create the virtual cockpit so I’m popping out all primary displays)

On the CRJ I’ve edited the aircraft files to disable the FO’s screens to help performance. I haven’t tried (nor do I know what I’m doing beyond commenting out code and testing it lol) this on other aircraft.

Hi again this is very interesting and hopefully a solution is coming …but what I don’t understand prior to fridays latest update I was happy with the frame rates that I was getting .hence ive no doubt something specific with that update changed something to alter pop out panels impact…the question is to what advantage …surely you would expect if they were tweaking it’s got to have some benefit…but alas Asobo seem to have a different way of thinking than I am used to.