Agree. Needs to be fixed even if it’s a minority issue.

I never said the problem don’t exist, and the PC park is far more than few machine (I own 2). On mines, I never saw such degradation on clouds when you pass through them, never. So when I said “configuration” is goes from software (settings, drivers, etc.) to hardware. I feel sad for those seeing this frankly, and hope devs will find quickly solution for such bad graphics… A Zendesk ticket with such video may help for sure.

I’ve tried every configuration I can think of and I’m at my wits end.

This goes all the way back to April 2021 as seen from one of my emails with PMDG Support: 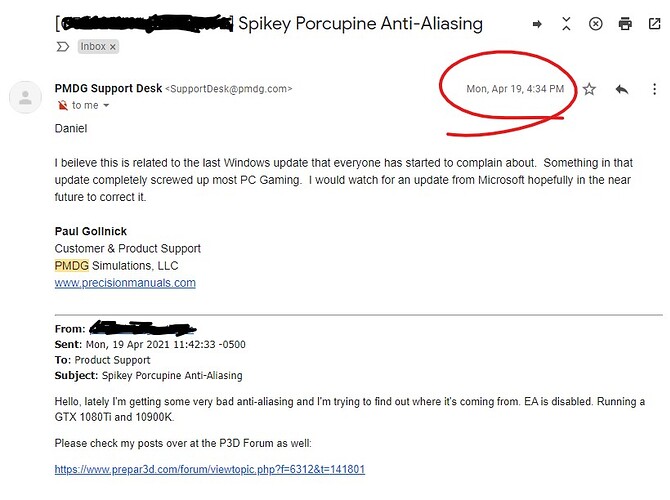 I’m already running Windows 11 and it appears to be the same core as Windows 10. Unless tomorrow something changes in the official release? Up to now though it’s the same as Windows 10 unfortunately.

man this issue is the worst to have

I think it’s more the fact that we can’t find the culprit ourselves so it becomes increasingly frustrating. That only tells me it’s something to do with internal code somewhere.

When does this topic get that blue bug emoji? lol.

I can clearly see jaggies on 4K 100 render over displays and edges of cockpit - external surfaces of plane ! I have said this several times and will keep saying until it’s solved.

Everything on default settings. No non standart touches on anything (Nvidia - MSFS - Windows etc) It started to show up since SU5. It’s not only a shimmer problem. You’d better to accept facts and work on it. It becomes quite annoying. Why do you think I purchased a complete 4K system for only MSFS ? to see shimmer jaggies or visual downgrades all over ? Even you don’t tend to accept the issue clearly. Title says bug logged but during Q’A it didn’t seem to me that devs are quite on issue and interested in !

i’m just asking like this if someone found a workaround fix ?

For what, for the shimmer? Nope, otherwise we wouldnt be whining about it constantly =(

as mentioned… it’s a common mistake that with 4K all AA problems no longer exist and there is no need for AA algorithm.

You’d better to accept facts and work on it.

I showed in pictures and video that at my system is no change in AA artifacts compared with the release a year ago ( none VR ). May be the developers have the same problem to re-produce these reported “new issue”.

I play in 4K and I have issues with shimmering and AA too… also around WU5, but it’s not only in FS, it’s in other games too…

I guess it’s just a coincidence of the time slot. It must be something else. Anything with windows oder Nvidia drivers

one additional question:
have you set in windows graphic settings some kind of dpi-scaling ( often 125% for laptops ) ?

Where may I find this option? 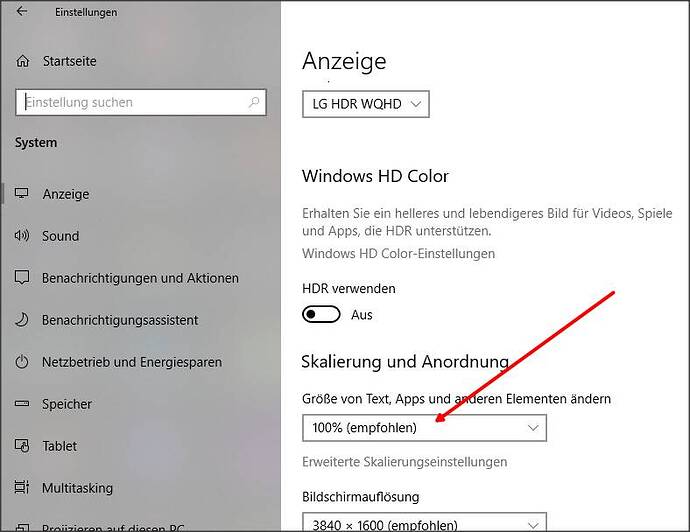 i think this issue is related to draw distance, i noticed that asobo have downgraded the draw distance of buildings so when you are at distance, you see them shimmer and then they quickly disappear. It’s like the shimmering is the consequence of the low draw distance. (it’s just an assumption)

I dont think its related to draw distance, at least not directly. I gst it on buildings and trees that are nowhere near to the draw distance border, ie, they are much closer.