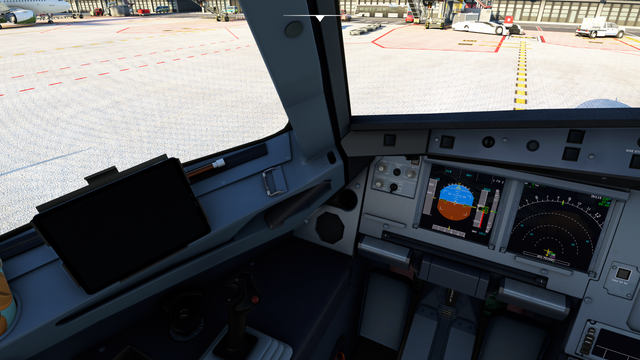 Play with the settings on your monitor - tv. Its something in there, I can make the uhd tv im using do that , but off hand I dont know which settings are to blame for it.

I tried, no much options on my Samsung LU28R554UQUEN to change anything 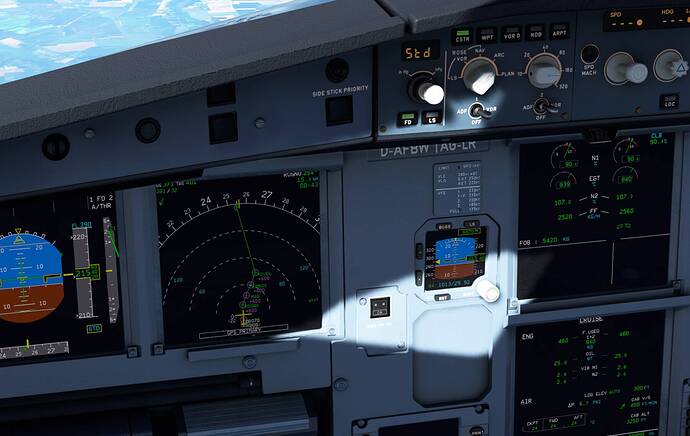 Thanks for creating this post! The shimmering/jaggies/lack of AA are my biggest issue with SU5! Please fix this, Asobo, especially for VR players whom are most affected by this degradation in quality.

I made an interesting observation:

Yesterday I found some help here in the forum to enable HDR10.

I have enabled HDR in windows, set the colours on my 3080 to max at 10 bit for HDR and enabled HDR10 in the sim… (my 4K monitor supports HDR10) and you know what… not just the Simulator experience is now superior, all this wiggly moire overlay effects seems to be gone, cockpit displays are readable now again and I see far less artefacts everywhere.

From SU5 with relevant hot fixes I couldn’t manage to get pure real 4K visuals without shimmering and jaggies. Inside cockpit everything looks fine but outside and mid distance is disaster. Especially on default scenery and buildings there is an annoying level of rendering problem 4K@100 with ultra settings (Critising based on 4K display obviously). Also shading and lighting on distance is a real disappointment with this sim. I hope main reason is lack of implementation of DX12 and it would be really nice after a whole year if we even get what is advertised.

It would be really good if we know this bug is logged and being worked on ?

I’d like to know the result and cause of the bug once it’s fixed if Microsoft would please let us know.

It seems to me that the antialiasing problem is actually down to lighting within the sim, I’ve noticed that shimmer is an absolute minimum when in low light conditions like sunset and sunrise also, when visibility is low, i’m not getting shimmering of buildings at all. It only happens in certain lighting conditions.

Maybe that’s where attention should be focused to reduce this annoying effect.

Some people have said it might be due to an issue with HDR?

However, other games also have this problem, so I’m not sure if it’s just lighting?

I’ve also noticed this in normal (non-vr) too.

In a year of 2021 in a game which supposed to support 4k I can still see lots of jaggies. Thanks. I certainly hate this Xbox implementation. It just screwed up most of the major things on PC side. Shading is far from good, resolution jaggies are everywhere, clouds and textures are pixalated. Hey Asobo Xbox users wont be here after some time but we long time simmers certainly will be. Please dont disregard us.

Daytime lighting should certainly be visited and optimized again. All bright all saturated. Far from real. (All settings default nothing special on my side)
Shadows are really killing immersive. Please god. Let DX12 flow in and we may have good visuals then.

Advice from the dev team came on this subject so we have un-merged to keep the AA issue in VR vs non-VR topics separate. Unfortunately, we lost the votes here and are unable to manually add them back. Please re-vote on this topic if you did prior and many apologies as that’s on me. It had about 71 votes at the time.

3 Likes
Will the broken Antialiasing (Shine and shimmer at the building and trees) be repaired in the future?
ChaoticSplendid September 14, 2021, 3:41pm #42

This is not the VR-specific topic, that one still has its votes.

No AA anymore in menus in VR? (logged by @TheRealOli4D) Since yesterdays Sim Update 5, the menues in flight (ATC windows, weather window, etc. have no AA anymore. They are very pixelated and fliker. The rest (cockpit and landscape) are fine. It’s these windows only. Anyone else having this issue? You can read the windows… but without AA they are very jagged and more anoyingly: flickering. AA downgrade since SU5 (logged by @japayannick) This is a separate issue from the AA VR menus issu…

The separation of these issues was advised by the developers as noted in the post above yours, so I’m sure both are on their radar anyway.

Okay. Thanks for the information

let us hope that the broken Antialiasing is on their radar.

But the broken Antialiasing in VR is not only in the menu. There is also a lot of more shine and shimmer in game…

I see, although this new shimmering is not a problem only in VR but in standard 2D mode as well, so it had to be moved to the correct section.

…let us hope that the broken Antialiasing is on their radar.

You know folks, all of that is nice and dandy like…to fix the AA, horrible stutters on camera pan, scenery popping in, pixelated/lowres clouds, ugly aliasing of mapped shadows, subpar screen-space shadows, noisy reflections on everything making water surface at a certain distance looking as if it’s raining…
…and a great deal of other issues covered in all these many topics during this 1st year of our new simulator’s life (baby)

…patch that a bit, break this for a while, but stitch that over there so that this isn’t a big deal anymore, etc…Yeah…it’s fine.

But I have something to say !
Every single thing up there. All those topics. All of that together with all the votes should be merged in one mega-topic and given the title: “DIRECTX 12 ULTIMATE”.

It’s literally a dream API for the exact scenario and the exact demands that we face in the MSFS !
To finally have this masterpiece under a modern API the way it was supposed to be released.

Another reason why I’m all hyped about it are all those cool airliners we all know and love…that are to be released…but they won’t be released before the simulator receives the DX12 treatment.
Why ?
Because when the switch to DirectX 12 happens, it will literally break almost every single addon and livery, and every single one of them will require an update.

And if it’s got some C/++ or something like that (of which every complex airliner has A LOT of), it shall require an update…from scratch.
It’s also known as “full rewrite”.

When the DX12 happens some of the existing addons might take weeks before being delivered an update for.
However, despite bringing dramatic compatibility requirements in regards to addons - it shall deal with all of that up there​:point_up_2: and introduce improvements far greater than the word “dramatic” implies.

Every single thing up there. All those topics. All of that together with all the votes should be merged in one mega-topic and given the title: “DIRECTX 12 ULTIMATE”.

You should temper your expectations. DirectX 12 won’t be a magic fix for everything.

For example, the clouds and reflections look grainy due to the ray-marching technique which accumulates samples over several frames, for performance reasons. They said in a past Q&A that the fix for the grainy reflections will come with ray-tracing, but at a hefty performance cost of course.

The stutters and pop-in when panning the camera can be fixed with a new graphics setting in the next update, but it also means giving up some of the performance improvements that Sim Update 5 brought. It will effectively allow you to reduce or completely disable the off-screen scenery culling, which helped reduce CPU load and RAM usage so much.

The anti-aliasing is something completely separate. They can continue to refine the TAA algorithm, or add new AI-powered technologies like DLSS and XeSS. But the API is irrelevant in this case.

DirectX 12 will definitely allow for better visual effects, but your hardware needs to be up to par so you can enjoy them.

Single biggest issue since SU5 for me, both in 2D and even more so in VR.
very unfortunate that all the votes were lost as there were over 70, now just over 40.
It would be appreciated if the devs could comment on this major bug and confirm its existence and that it will be fixed in the next update. Makes the sim virtually unplayable for me currently, as the graphics are so degraded compared to the prior version that the fun and immersion is completely gone.

I really hope this is addressed and restored in the upcoming update.

Please get the votes back to where they were and should be.

EDIT: I know that the issue is in the bug list and “under investigation”, however a few comforting words and acknowledgement by the devs that this is indeed a bug (just like with the lighting issue that was resolved in the hotfix) would be more than welcome. I feel left in the dark about if this issue is being fixed and when.