Bush Trips don't go to 100% even after I finished them

Hi folks, be sure to not engage time acceleration during the flight. It is known to invalidate at least that leg.

And, of course, don’t click on the “i’m lost” button

It seems all legs finished before SU5 will not count. I was able to fix by starting the bush flights from the beginning. Activate developer mode, teleport to first destination, first leg finished. continue, teleport to next destination, second leg finished. I was able to finish the french trip in about a minute - it went to 100% this way. Hope it helps somebody here…

I just did the Balkans trip after SU5 on xbox and I got the achievement for not using assistance, but it shows 97% complete.

Also, The Nevada bush trip would not complete at leg 1 landing at the correct airport. I can’t restart it at all. I can continue at that airport and taking off and landing again still does not count it.

Just to capture the status of Bush Trip: Norway (on Xbox).

I was able to successfully complete the trip (no cheating) to 100%.

Watch out, leg 12 doesn’t have a route shown at all (empty leg information and navlog)
But if you fly from Bodø Airport [ENBO] to Svolvær Airport [ENSH] it works.

I was also experiencing the engines cutting out (despite the fuel being fine).
I mapped ‘repair and refuel’ to a keyboard shortcut to get the engine going again when that happens.

Well, I all my bush trips seems to be correct after SU5 except one.
Sweden says 80% where all other I have done says 100%.
Today and yesterday, I flow Norway and Finland, which both says 100% after finish.
Now I only need 1 more, lets see if that goes to 100%, I sure hope so after reading this thread.
It was Sweden with 80% that made me come here in the first place.
Seems I only need a solution for that.

So I just completed last leg of the Bush trip. Halmstad to Malmö. After I landed and was at a stop it said leg complete. But it is still on 80% and it should have said Bush trip complete I guess. Anyone else have this problem? I play on Xbox

About the issue with leg 12 in Norway bush trip, I experienced the same on XBOX and write this topic showing, with pictures and details, how to complete this trip. Later, I found this one where this issue is also discussed.

Nice to see that, as promised, we share the same experience on PC and XBOX - some bugs are common to both versions

Regarding the bush trips which remain incomplete, I also had the same concerns.
This is because the logbook does not always record flights correctly. Often this happens when we go through the steps. For my part, I imposed a rule:

I had that of Finland which remained locked at 91%. The error was at the start, where the logbook had incorrectly recorded the second flight. I had to start all over again! but sometimes it is sufficient to resume only from the last valid leg.

. The numbers in the progression was set back to zero, but in the activities screen, I was seeing 100% for some bush trips

.
To correct the error of wrong numbers (in the profile screen), I only had to redo the last leg of each trip. It works, it revalidates the whole trip (even if the logbook doesn’t contain all the legs).

Note that, as I mention in my other topic, the Leg 12 of the Norway trip is recorded in the logbook as ENGM - ENSH (instead of ENBO - ENSH) but this works. The startup popup at ENBO, also show “ENGM - Gardermoen” ! but of course, you are really on the runway at Bodø!

But it did not finnish properly (because it’s Finland) and it only went to 88% (8/9 legs completed) despite the sim crediting the BT as finished.

Same problem with Norway - 13/14 recognised, though this has changed as it had previously reached 100%, but now it’s fallen back oddly. (leg 2 is not showing as complete strangely)

(also one of the legs in Norway isn’t listed in the Navllog, but you can look it up and fly there anyway)

same problem here with France (Bordeaux to Mont Blanc).Finished last leg, but stays at 94%. When I enter the bush trip it shows check marks for all but the least leg🤷‍♀️
(Xbox)

I did have some issues with the Scandinavian bush trips but I’ve got them all to 100% now.

I did need to re-fly some legs to do it.

It seems all legs finished before SU5 will not count

This makes sense. I see a lot of progress reset with everything since SU5

Landing challenges and training is the same.

I can (sort of) understand it for the training courses as they have added extra content but I have landing challenges that reset as “new” and not completed despite having been completed several times over before SU5 hit.

It reminds me of the sort of progress wipe you get when a game shifts from closed beta to release.
So I guess the last year on PC really was nothing more than an open beta test.

I’ve had this issue also, I’m on Series X and before update 5 I had completed every leg of every trip before I was even aware that my progress was not being logged correctly. Stupidly I decided to delete and reinstall just the game but not my profile data only to find I would have to fly every bush trip again from scratch .
Since restarting the flights though I have noticed that I’ve never had a leg not register properly if I go back to the main menu at the end of the leg instead going to the bush trip menu. Probably just a coincidence tbh.

I also now have a similar issue with the landing challenges, I’ve currently flown and completed every one at least twice and yet my profile stats still only show 37/39 completed. I’ve dropped a support ticket about both these issues only to be met with a deaf ear and thus I’m getting a bit fed up with it all. I have no clue about programming these things but I would’ve thought that being able to save progress properly is a fundamental?
I’m genuinely starting to regret getting the Premium Deluxe instead of just playing on game pass now. Ty, mini rant over!

I just finished my Swiss Bushtrip with 3 legs. Astrong textt the end the Sim confirmed that i finished leg 3 which is the last one but it remains on 67% Completion. Same with the Bushtrip that i created myself, just not getting the 100% completion rate. Tried exiting by going either back to main menu or to bushtrip menu. Anybody with a solution to this? Thanks.

Do you have any add-ons in your Community folder? If yes, please remove and retest before posting.
Yes I have the Bushtrips in the Community Folder. But if I remove them then …?*

Provide Screenshot(s)/video(s) of the issue encountered:
*** see above*** little airplane stays, final leg not ticked off****

Sorry, i am not a technician, just a simple user. What is a community folder and what is an add-on?

Nothing reported to Zendesk.

For the rest, i described and the hardware is offshelf hardware that workes fine.

It could ve with a recent update of the Garmin or with the last update in September.

How did you identify the legs to refly?

I had also some legs invalid on my Serie X, and identitfy them is quite easy.
On the Swiss lakes trip, there is only 3 legs (and thus, 4 airports): 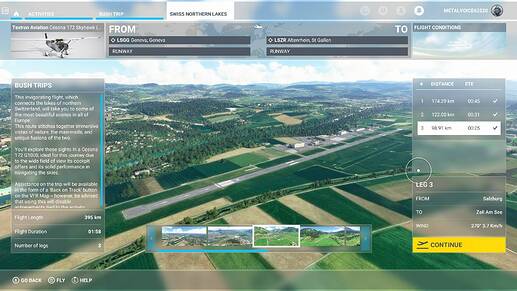 Open your logbook, and use the “search” entry zone to look for airports. 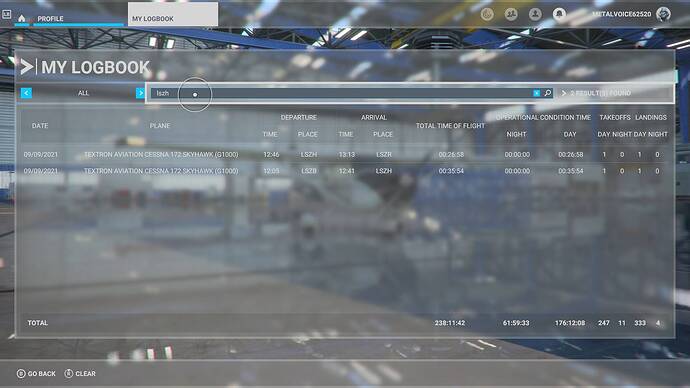 Check that you have the corresponding leg, but above all, make sure that there is a value (and not zero) in the takeoff and landing column. If one is 0, then this leg is invalid.

- Don’t use the “fly again” button (shown when you click on the line of the leg in the logbook), because this one will refly in the same conditions, but not validate the leg in the bush trip section. 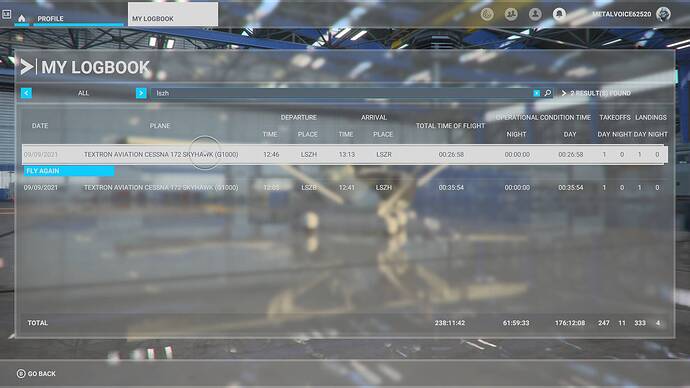 Thank you Thierry. Checked the Airports, all with valid 1 in start landing. No zeros. It is always the last leg that will not be ticked off. the little airplane stays.

The legs have symbols next to them to indicate they are done.
But the one without didn’t.

If it’s the final leg that’s not done, that’s easy but sometimes it’s a leg in the middle of the list.

But you can ‘force’ a leg to be completed by just starting in then backing out, but it pushed the uncompleted leg marker to the next leg.

It’s tricky to explain without pictures but I don’t want to break anything by going back in!

Thank you for your reply. I didn‘t quite understand. But from what I see there must be a bug in the software. How can this be reported to be fixed by MS?

I’m sure MS/A are aware.

The problem with any ‘fix’ is that they are not always retrospective and may require re-flying a leg.

I’m sure MS/A are aware.

If they’re aware, they sure haven’t acknowledged it yet. I also got a response from MS Zendesk that all bush trips I completed prior to SU5 but were reset to 0% can’t be restored - so how about fixing the issue then so we can at least re-fly them to completion.