Can we a get a separate LOD slider for photogrammetry?

Photogrammetry is much heavier on system resources and connection bandwidth than typical scenery with mesh and autogen. Could we get a separate LOD slider for photogrammetry so we can better fine-tune the balance between performance and visual quality, without having to sacrifice on other aspects of the scenery (like tree draw distance, quality of distant mountains)?

I understand that, like trees, it might not be possible to decouple a specific aspect from the Terrain LOD setting, but I’m wondering whether photogrammetry is a different case because it can be toggled on or off in the settings, which could mean it’s using a separate dataset.

Here is a related Wishlist topic to this request.

Preface: The Terrain Level Of Detail setting makes one of the largest impacts to performance in the simulator, because it affects the rendering distance of everything from ground textures, to buildings, to trees and other vegetation, to terrain and photogrammetry, etc. I will suggest a possible way to reduce the performance impact of the terrain LOD setting in the simulator, so that users can have finer-grained control over our performance and image quality. What is the definition of Terrain?…

I’d love for this to be a thing as well.
I submitted a similar wishlist about a year ago on this topic.
Hope this gets some votes.

Thanks for linking to my wishlist item

I don’t think Photogrammetry is the issue, its the Sun being too bright. When the Sun is low the photogrammetry is good but during times like noon the terrain gets washed out making it look low quality. Seb said last Dev Q&A that he was experimenting with the sun’s brightness to get rid of the Volcano clouds so after a while thinking about it and going back to some of my old screenshots from 2020 I instantly noticed that the sun is way brighter now.

Having seen how successful other LOD slider requests have been (Vegetation) and being as I still now watch Vegetation popping in on approach to Airport (where buildings are visible way beyond the Vegetation)… I don’t hold out much hope.

Do the tall photogrammetry buildings (i.e. city skylines) render farther out than the autogen buildings?

This is something I should test at some point, perhaps on the border of a photogrammetry city. As far as I know however, taller photogrammetry buildings are not drawn further away than the rest, they will be rendered as far as photogrammetry goes. If you turn Terrain LOD all the way down or zoom in very far, you can see where the photogrammetry portion ends and standard satellite imagery is drawn instead (unlike typical terrain mesh).

When the Sun is low the photogrammetry is good but during times like noon the terrain gets washed out making it look low quality.

That’s true, although the request I’m making is more for performance reasons rather than quality. I want to have the terrain rendered as well as it can be (LOD 300-400) without experiencing stutters when flying right over photogrammetry or landing at nearby airports.

Having seen how successful other LOD slider requests have been (Vegetation)

Although I’m not too hopeful either, it’s worth considering that having the vegetation data draw out further might have required a significant refactoring of the LOD system (which might be tied to Bing Maps), meanwhile photogrammetry seems to be a separate dataset since it can just be toggled off entirely. Hopefully Asobo can shed some light onto this.

I think I had my terrain LOD on 100 and could still see the tallest photogrammetry buildings at a distance so far away that I could almost lose sight of them against the horizon (I don’t think they were POI buildings either, which seem to be rendered even farther). My prior LOD tests never seemed to show small autogen buildings rendering that far away, even at LOD 400, but I will have to do some more testing on that. Maybe taller buildings render farther away than shorter ones (although these screenshots seem to indicate otherwise, with respect to photogrammetry). Too bad we don’t have a debug tool like the trees option which shows rendering distances at different TLOD values and Trees settings.

If they can seperate that from “draw distance” i think alot of people will be happy.

I agree and some of my screenshots in the above topic captured the textures getting sharper at higher TLOD values.

That’s true, after the Sim Update 5 hotfix the maximum draw distance of photogrammetry is quite good, even at lower values. For example, if I recall correctly at LOD 100 you can see Downtown Manhattan from KJFK. I’ll try to take some footage for this thread later.

(I don’t think they were POI buildings either, which seem to be rendered even farther)

On the contrary, the Objects LOD slider does not seem to extend the draw distance of hand-made landmarks, only airport objects. A good (and rather unfortunate) example is the Uluru discovery flight, no matter how high the slider is set to, you will not be able to see the Uluru at the start of the flight.

Too bad we don’t have a debug tool like the trees option which shows rendering distances at different TLOD values and Trees settings.

I think there is a debug tool where you can see information on each terrain tile you point the cursor too, and it displays information like its LOD, surface type, biome and more, however the text is really small and condenses too much information, so it’s not really useful for the average user. I would really like a tool which colours the tiles to show their current LOD.

I seem to remember the rendering distances of the POI towers in Tokyo being independent from photogrammetry and autogen, but I’ll have to take another look at that.

Notice there are no photogrammetry buildings or autogen buildings around it. 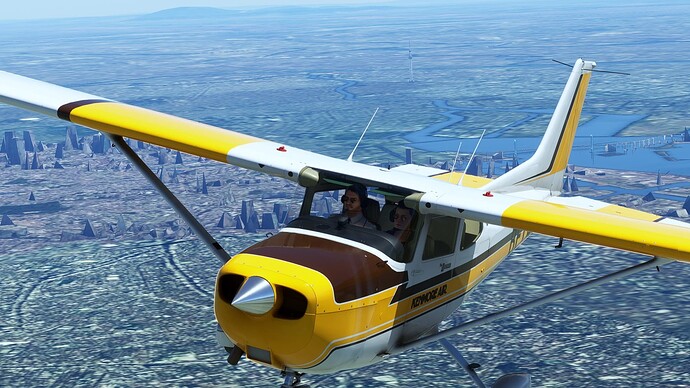 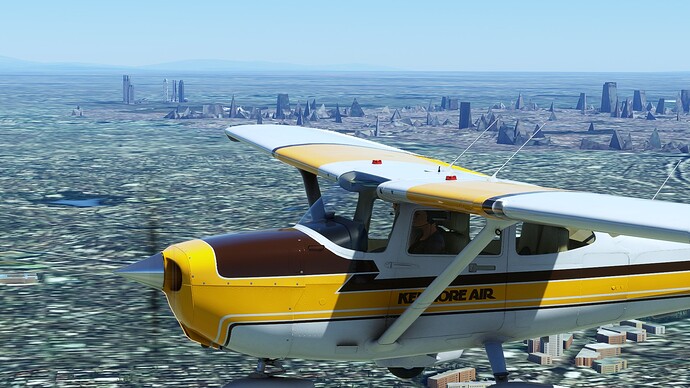 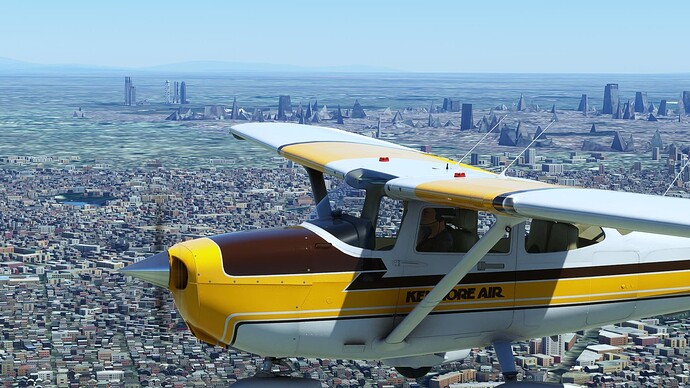 Here is some of the footage I promised. In the screenshots, I’m using slew mode to show how much distance is required from the aircraft in order for the tall Downtown Manhattan buildings to appear (any further from each spot and they disappear). 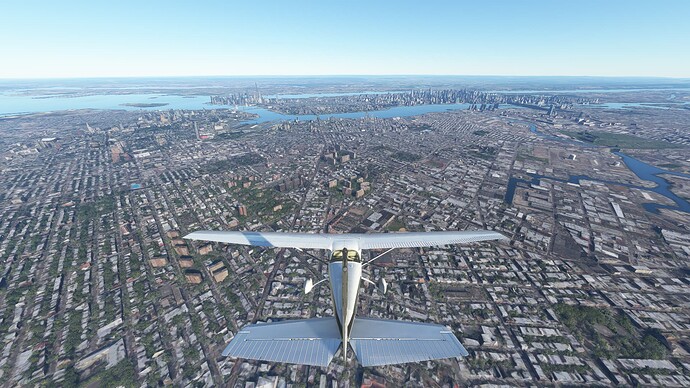 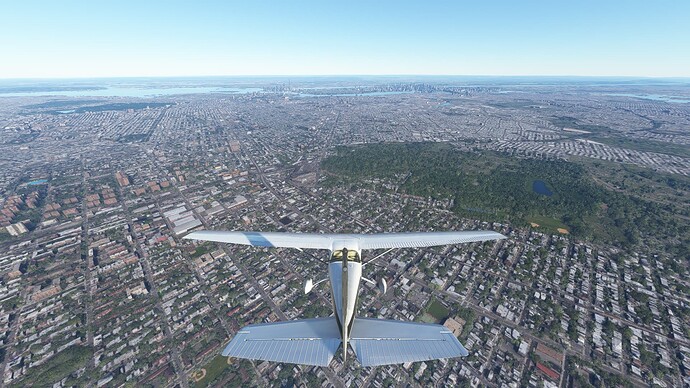 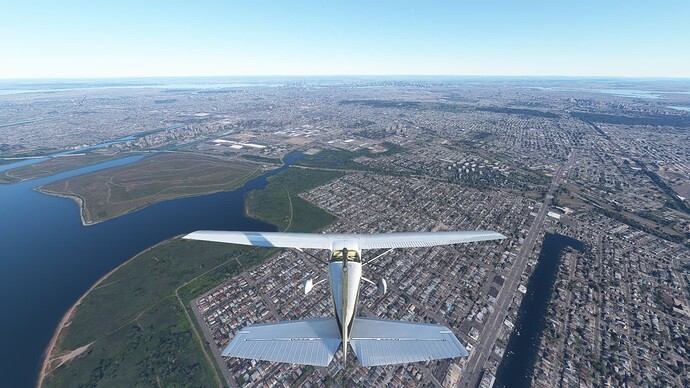 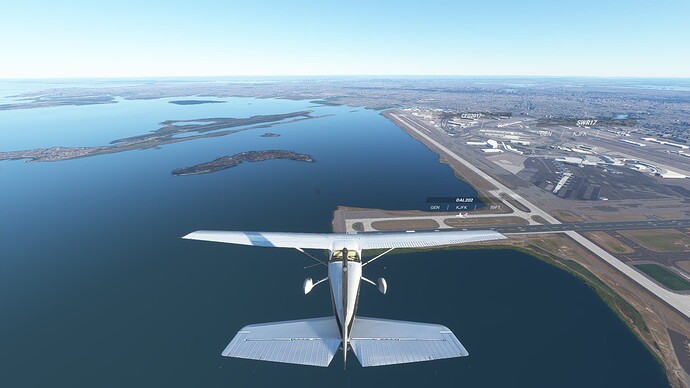 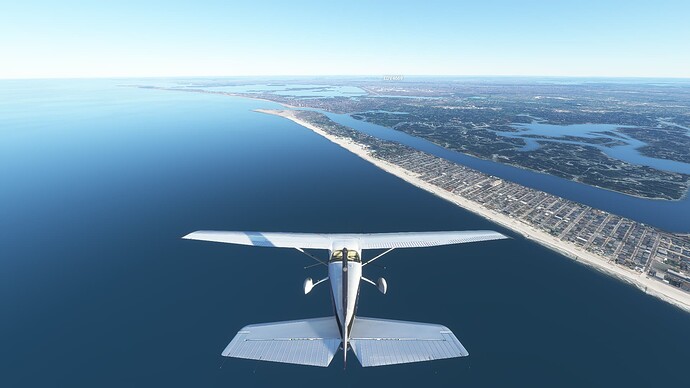 Any higher and the buildings are barely visible without zooming in. As we can see, LOD 200+ is not needed for decent photogrammetry draw distances, and personally I feel that in cities where the data is very good (unlike London and Paris), LOD 100-150 is good enough to make them look decent. Too bad that LOD 400 is needed to make trees draw really far and to make mountainous mesh look decent without horrendous morphing.

And in the following video, we can see that tall photogrammetry buildings are not drawn any further than the rest, they disappear when photogrammetry tiles stop getting rendered. It’s worth mentioning though that, at the very lowest LOD, you can only see very tall buildings because the LOD compilation algorithm simply chooses to completely flatten the rest.

I’ve found in my testing that settings Buildings to Ultra will draw buildings as far as data allows (similar to the Trees setting), however they are drawn at full density only up to LOD 50. Increasing Terrain LOD beyond that will allow more buildings to be drawn at longer distances, but there will be much fewer of them in each tile (and I think it prefers taller buildings).

In most cases Ultra looks good enough, though there are some autogen cities (like Athens or Giza) where the high density cut-off becomes really obvious and you can see the tiles filling up with buildings as you fly closer (more exaggerated under certain lighting conditions).