Blarney Castle is a often visited landmark in Ireland. It is located at 51° 55’ 44.76" N 8° 34’ 15.24" W. Much of it is in disrepair. I created a flight plan using Little Nav Map and it’s location was shown on the flight screen. When I got close to where it is supposed to be the screen pointer disappeared somewhere about 1 mile or two. Kept on flying did not see it. Circled around in a 3 or so mile radius and did not find any sign of it.

BTW, the flight screen pointers only work in Full Screen

Since these are Bing photos I would expect something to appear.

Your be happy is a screenshot with that castle added.January 21st, 2021 – Development Update - Microsoft Flight Simulator

Thank you for your reply but I do not understand. Flying at about 70 in a Cessna at 1000 feet I have circled around but cannot see it from the air. If I could see it I suppose I could learn how to use the capabilities of the sim to take a photo from the air.

Hey, to be clear, it’s not in-game yet. The screenshot from the Dev Update is from the upcoming UK World Update which now includes Blarney Castle within the scenery.

Thanks for the update - I will be on the lookout…

I’m looking forward to seeing better representation across the UK. Edinburgh castle deserves better than the autogen it has now, for example. The UK has a lot of castles dotted about, so many, for England alone, it would be unrealistic to expect them all to have hand crafted models, but it would be great to see the bigger, more well known ones depicted better.

You can download quite a few castles here. It doesn’t seem to include Blarney Castle, but I guess the author might be amenable to adding it you leave a comment.

Thank you for your reply ScalyQuasar - interesting name! “here” takes me to a website flightsim.to - I would like to join but I don’t see a way to do so - only login, that I assume, is how to get in once one signs up. I don’t see a way to signup - please advise me on that. Am I right in assuming that what I find there are Addons to MSFS 2020?

I would like to see both Castle Blarney and the Blarney Stone - both in slightly different, but close locations. There are many castles, abbeys, and such in various states of repair which are included on travel websites.

Just a bit of background on me,

I am in my 80s, a USMC veteran, who started flight simulation some 15 months ago on advice of my doctor as a way to improve memory, reaction time, and other brain activities. I worked in the IT industry from the early computers (1959) through desktops until 2000, including PC DOS, Windows, and OS2. To get started with XP 11 I needed a robust computer - X9 8 cores, 5.00 auto turbo, SSD, 3 32" Predator 4K screens, 2080ti graphics card, and 200mb Internet. I was running XP 11 using all three screens at 2K, flew a number of aircraft starting with the Cessna, and a few war birds. My favorite is the Cirrus G2 ( would like to see that one in MSFS). After exploring different modes of flight I chose low and slow sightseeing- world wide - planning trips with Little Nav Map. My home airport is Linden, NJ and is surrounded with oil tanks from the Linden Refinery. On first take off I noticed that the tanks were not present - only bare ground. I used Ortho4xp and the was white circles where the tanks are supposed to be. Than MSFS came along - got hooked with the trailer, installed it, took off, and voila that tanks appeared - well rendered. I was especially impressed with the idea that I did not have to fill up my entire computer with scenery tiles. Been hooked ever since flying the Cessna 1000 version. I am eager to help grow MSFS anyway I can. Part of my career was managing a operating system testing department where I was involved in Alpha, Beta, Regression, and User Interface Testing so in that way I have some experience in program development.

It looks like the next update is delayed by a week, but look at the second screenshot here:

We are hard at work hard on World Update 3 and it is looking great! This massive update contains new aerials, new DEM, over 70 POIs, 5 airports, two landing challenges, and will also introduce 5 brand…

As regards flightsim.to, yes, just click on Login and you’ll be prompted to sign up. I think you can download a lot of their stuff without registering, it’s just the bigger files that you need to register for.

They seem to be very good, and people are releasing stuff over there at a rate of knots. I put something up there yesterday and there are already 50 newer items. They have a map with the location of all the scenery and airport updates on it, so you can enhance whatever area you are flying in, very easily.

Have you tried the Bush Trips delivered with the game, for memory enhancement etc? Some are quite tricky and take a little brain power.

A doctor who prescribes playing flightsims, is a good doctor in my book.

Yes, I have to admin I’m not particularly enamoured of my screen name. It was automatically assigned to me when I bought MSFS 2020. I keep meaning to get around to changing it to something less reptilian.

I think you should be able to download from flightsim.to by just clicking the download button. If you do want to sign up, you can click in the top-right, where it says “guest” that will give you the option to create an account.

Good luck, and I hope you enjoy many more happy years simming. 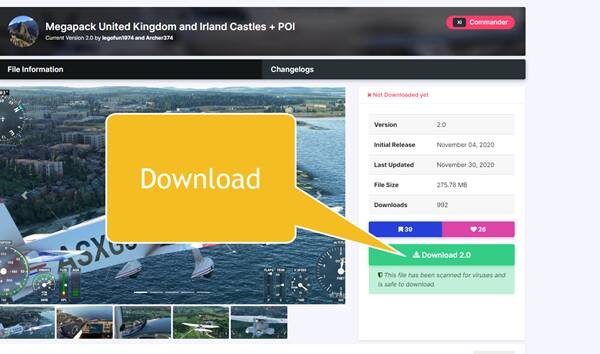 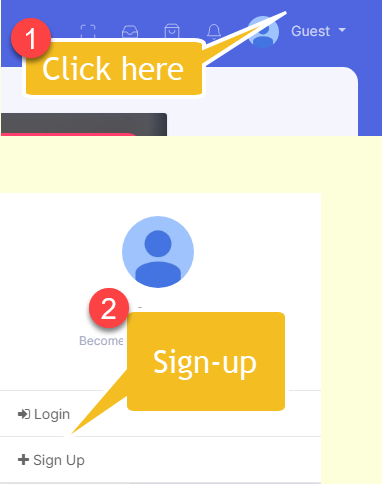 I did not mean to run off so in my intro post - Just wanted you all to have some notion of my interests and experiences. I will be less verbose in future posts.

Apologies, it was a simple joke and I did not mean to cause offence.

I am off to a new challenge! I am trying to hone my sightseeing skills by finding and flying over The Fairy Chimney site in the Cappadocia in Turkey. According to what I can find on the web the GPS coordinates for this attraction are: 38° 38’ 26.25" N 34° 50’ 42.46" E. I created a flight plan using Little Nav Map using these coordinates. I was flying along the LNM path when about 1.5 miles from where the MSFS simulator showed on the screen pointer disappeared but I continued. I never found the Fairy Chimneys even after circling around. Is this a bug or am I doing something wrong.

I find that a lot of chimney- or spire-type formations don’t look great in the game; Bryce Canyon is a huge disappointment. 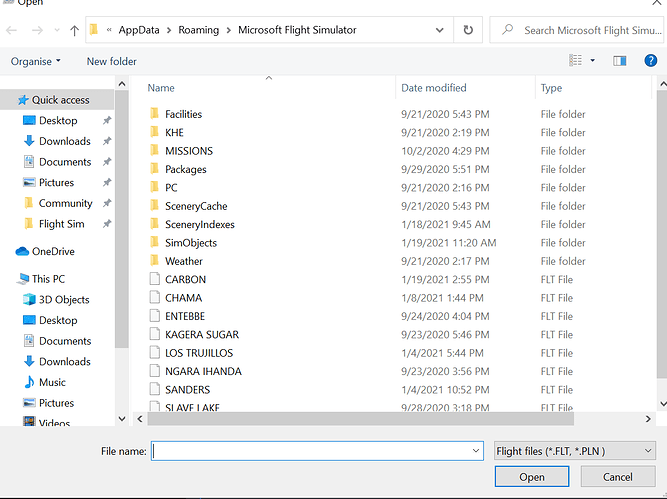 You can save your flight plan in Little Nav Map to any directory and load it from here, ie your plans don’t have to be in this folder. When saving, choose the option to export as PLN, eg 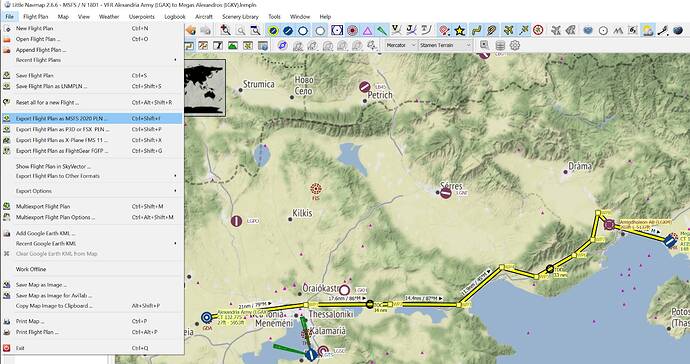 Finally, you probably know you can jump straight to a location, but just in case, here is a guide. It’s handy if there are no airports nearby or if you don’t want to spend time flying out there.

Using GPS coordinates or Latitude and Longitude data, you can go to any exact point on Earth in Microsoft Flight Simulator 2020 instantly. Here's how you do it!

I would like to see both Castle Blarney and the Blarney Stone - both in slightly different, but close locations.

Just in case you dont know, the stone is actually a part of the castle, it’s part of the wall up at the top. Apologies if you know this already. Right now I’m in Cork, just across the city from Blarney castle, but I think I’ll go take a look at Linden, N.J. and the surrounds, that’s what MSFS can do for you, anywhere in the world, what an amazing piece of software.

I have a feeling that I don’t always get the correct GPS coordinates when I find them on the Web. When the developers add a POI to the sim, where do they get the coordinates they use? Is there a directory where I can find the coordinates of all the places MS includes in the sim and updates? I would like to verify the coordinate format MS is using so I can be sure I am giving MS the best information when I do flight planning with Little Nav Planning.

My main use of the sim is low altitude sightseeing.

Thanks for your reply - No Worries regarding my long post.

I will try this. However, I cannot find the Microsoft Flight Simulator Directory in my system - looked and searched everywhere.

When I go to look at Microsoft Flight Simulator using Windows 10 I am told I don’t have permission. I can see it by opening up the sim and via load/save. You have a lot of folders that I don’t have i.e., Facilities, KHE, etc. Can you explain the difference?

In addition I downloaded to the community folder a bunch of castles in the UK called 20 chateaux UK_ej9EP. The download contains a number of folders apparently detailing individual castle locations. How do use these in a flight plan. How can I go directly to one of them?

Sorry for all the questions?

The directories are a little tricky, so you may not receive definitive or satisfying answers on this. There are TWO versions of Flight Simulator - one was released on the Microsoft Store, where I assume you bought it - and the other was released on Steam, which is an online gaming store. Even though it’s the same game, it is very likely that the directories are not the same in a lot of cases. For example my Community folder is in a different place than yours. So this might explain why I have ‘extra’ files in the folder you saw. 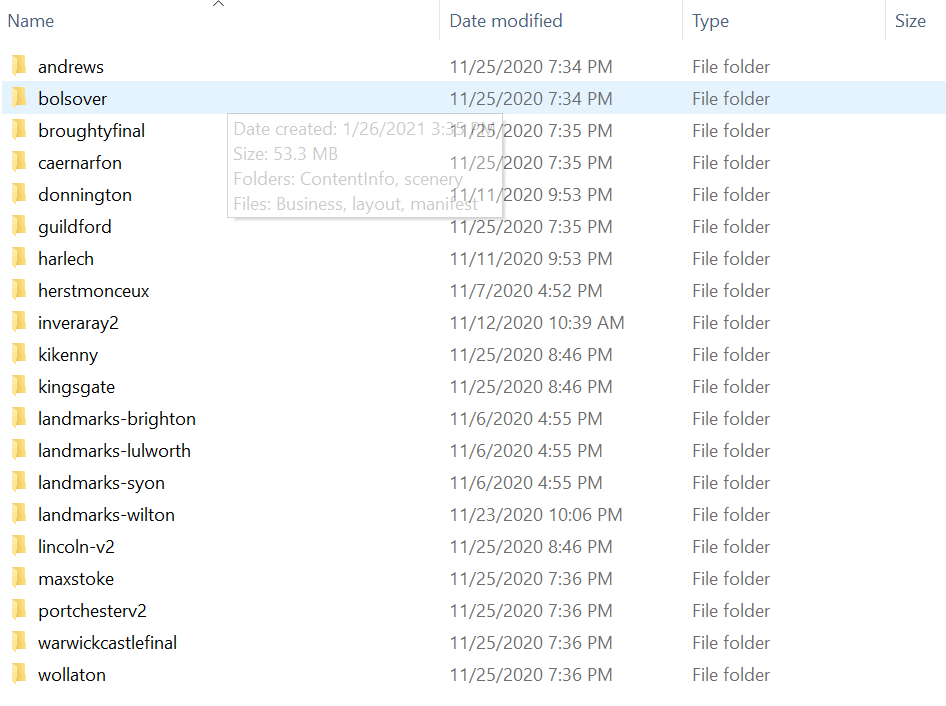 Once you are happy with that, restart Flight Simulator and they should be present in the game.

One of them is St Andrews, so look at a map of the UK and you will see it marked on there: 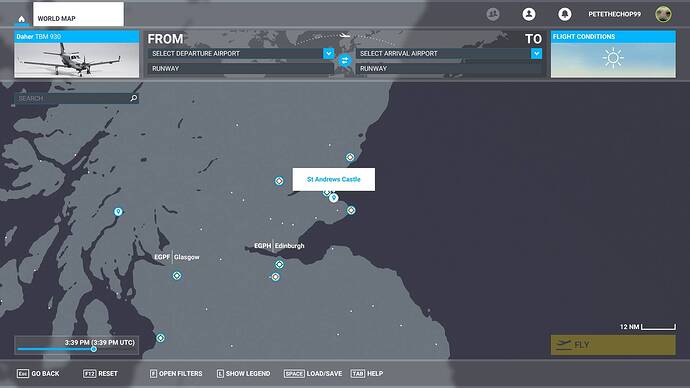 So just click on the marker and set it as your departure point - you will start in the air in the immediate vicinity. Hope this helps!

Oh! Also if you are in a plane with an autopilot, this is turned on by default when you start in the air, so just turn that off (usually an AP button on the dash).

Thank you for your reply.
One of my ambitions, and the reason I have pretty much put aside my flying with XP 11 is the ability to fly from place to place using POI sites as my legs in planning a sightseeing route. Since I use LNM for flight planning once I choose departure and destination I can add POI sites. The hitch is that I need to have accurate GPS coordinates. I have all the sites in my Community folder as I unpacked the download into the Community folder. I am guessing that the sim has a record of the GPS coordinates somewhere in its innards.