We’re multiple having this issue as per comments here (FR website) https://www.simflight.fr/2020/10/30/microsoft-flight-simulator-sortie-du-patch-n5/, but can’t find anything on official forums.
We’re basically having pitch control issue with those aircrafts and a user reported having same issue with 320 neo too

WHat I experience is :

Controls seems OK to start with, so takeoff starts but you really can’t pitch more than 5° and if you release the controls, the aircraft pitchs down. Scenario looks pretty much like if you were having a trim wheel working against the pilot (or an AP willing to level the aircraft at all cost against the pilot - but there’s no AP on the 152 so …)

This happened following the last update, everything was working like a charm before.
I do suspect an issue with the controller settings as when I swap my Saitek Yoke with a Saitek X52 (unknown to FS prior to this event) it’s working OK again, but I couldn’t manage finding how to reset those settings.

Using SpadNext or not using SpadNext makes no difference at all btw so … no idea what’s going on !
Changing the flight model from legacy to modern makes it functional again, but that’s at the cost of any realism so that’s a no-no to accept as a solution

Move 'legacy' flight model option out of UI and into aircraft XML or .cfg, or label more clearly what it is for
MortThe2nd November 8, 2020, 9:57am #2

Changing the flight model from legacy to modern makes it functional again, but that’s at the cost of any realism so that’s a no-no to accept as a solution

Modern is the realistic new flight model created for MSFS.
The legacy modes are, and should only be used for backwards compatibility with (badly) ported FSX planes.

You even get this warning when switching away from the Modern model: 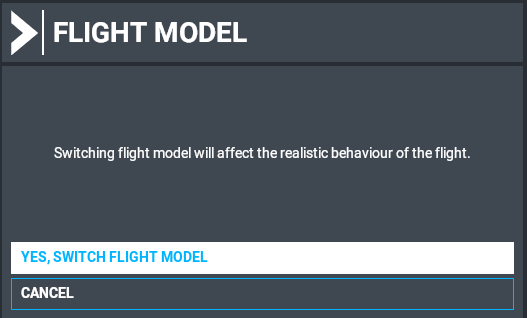 Don’t forget that the new, modern FDMs are still WIP.

Hmm … that’s not really the topic, but nevertheless, a few things here

Anyways, apart from that model vs model discussion, it should keep operating OK regardless of the model in use I’d think

Modern is the standard setting, not sure why yours was set to legacy.

Thing is, the legacy models were put in for backwards compatibility reasons, and are not developed further as far as I know.

The modern model is still being improved/optimized. The MSFS plane models (which were designed for the modern flight model) might receive changes as well, which might explain why the legacy modes sort of ‘worked’ before.

It appears that for some unknown reason, the default modern FDM switched to legacy for some users with the latest patch.

(I don’t try to be controversial here at all !) - I’ve never flown that aircraft in real life, but x-plane 11 cessna aircrafts are supposed to be pretty close to reality, and I’ve myself found the legacy model closer to x-plane 11 model over the modern one … so …

Ah, specifically to this;

No worries about ‘being controversial’, it’s fine to have a discussion.

In general terms; the FSX model seems to be more ‘on rails’. The main intention with the modern flight model is that it’s modeling wind (and its effects on the planes) more realistically. Things like wind sheer, turbulence over mountains/hills, ground effect, cloud turbulence etc.

Not going to go into the whole rabbit hole of how successful they’ve been at this so far, but that’s the gist of it.

Right - so I’ve switched to that model, and the take-off works OK, and overall is workable.
But I do confirm definitely that is not solving the issue that must be with the way the controller now works as for example, the Flaps fully extends automatically during the flight, while there’s nothing done in particular except flying the aircraft using solely the yoke on a trimmed aircraft (no touch at all at keyboard, mouse, on the mixture/throttle or radio panels)

Any idea on how to reset those controller details as I’m anticipating that’s the way to go ? (I’ve done a complete FS2020 re-download a week ago without success and have nothing in the Community folder)

Stacy was not the default for me, and I’ve never seen any patch change my my flight model, which is why I am a little sceptical of the “patch changes flight model” explanation.

But it does change my graphics settings every time, so who can say for sure?

Anyways, apart from that model vs model discussion, it should keep operating OK regardless of the model in use I’d think

No. The default airplanes in MSFS are designed from the ground up (pun intended), to work specifically and only with the Modern flight model. They will not, (and cannot), fly or perform as intended by Asobo with the Legacy model active.

The Legacy model is only compatible with aircraft imported from FSX.

Since MSFS release, the Modern model has always been the default setting in the UI. For some reason, after patch 5, that setting changed by itself to Legacy for some users.

It is probably good practice to make a note of all your various graphics and controller settings in the UI, and re-check them after installing a new patch to be sure nothing has been changed by the patch itself.

The assignments for my dedicated controllers remained unchanged, but the new (uncommanded) assignments to the X-Box controller caused several conflicts.

So, i’ll consider this problem is solved by now with the modern flight model change (I dislike, but it works)

Definitely though with this update controls have been changed to really weird things and I had to remap them.
Only my flaps issue was actually not due to MSFS but to Spad.Next, which for whatever reason I’ve had the mixture mapped same as flaps control. I wrongly assumed that was because of the controls configuration within MSFS as the aircrafts were behaving weird regardless of Spad.Next usage or not, and missed that one for a few days.

Thanks guys for the replies, appreciate the help here, the last unexplained thing to me remains why with the legacy flight model and the saitek x52 joystick instead of the yoke it works, but I won’t be searching any further on that as I’ve really wasted enough time troubleshooting that thing and will keep using sometimes MSFS & sometimes x-plane

Installed todays update and now after take off and several turns the yoke becomes unresponsive…?