You only need replace layout.json with the one at top level of install file package. Not both.

FDE fix v1.4 will appear on the aircraft selection screen when in the liveries selection area for the Longitude. The default Asobo livery will show this description.

Hmm…when I replaced the layout.jso at the top level (Official/Steam/asobo-aircraft-longitude) with your .jos file the longitude disappears as an aircraft choice in the game?

Did you follow the instructions included on how to install it? Did you also install the mod in the community folder?

Yes. the mod is in the community folder. I have installed many mods in community without a problem and this one seems straightforward too. So I am not sure what I am doing wrong with this one? It seems to be that somehow I am not putting the .jos file in its proper location?

OK, just to clarify, you are putting the longitude mod, a sub folder, in the community folder. And you’re putting one .JSON file in the official Longitude folder replacing the existing . JSON?

And you removed any existing Longitude mod first, correct?

Here are screenshots of locations. The json location is where I replaced original and now the longitude does not show in the game. 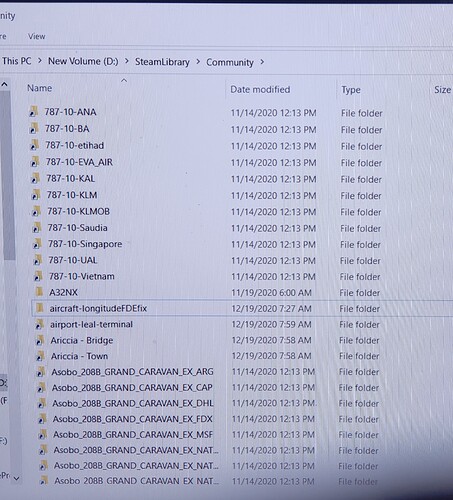 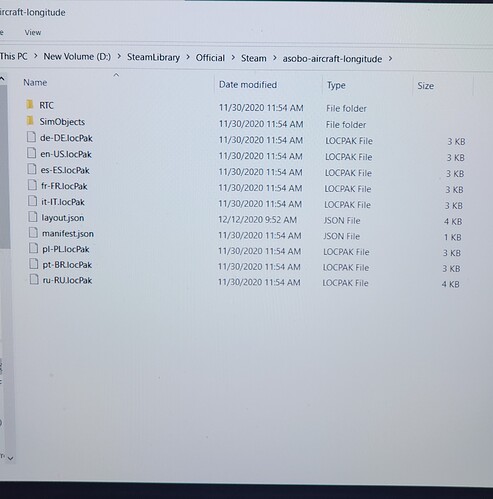 Yes…the only mod I did not delete was the lights mod, which I believe is a separate mod.

Usually when that happens it’s a problem with the official aircraft. I suggest you delete it and use the content manager to download it again. Then verify the aircraft is back. Then replace the .JSON file in the official folder again.

Got it working. Had to reinstall plane. Thanks.

I PM’d you on the latest updates. Let me know if you see it.

While I’ve been testing turbine engine model modifications, I’ve stumbled across some buggy behavior in the Live Weather settings. If I use custom weather settings and adjust temperatures away from ISA, for example +/- 10 C deviation from ISA of -57 C at FL430, I see predictable effects on the aircraft performance - in fact it’s quite close to how the IRL Cessna data plots show effects on N1 and fuel consumption. The barber pole also isn’t affected by these changes. However, if I turn on live weather, the barber pole no longer reflects the correct MMo speed and the turbine engine performance is significantly affected, and not in a way that is consistent with real world. Originally, I thought this was just a problem in the Asobo turbine engine model, but now I’m realizing it’s a problem with the Live Weather emulation and its effects on the aircraft. I’ve noted this not just with Longitude but with other a/c as well. Has anyone else experienced this and/or seen it reported to Asobo as a bug?

Here is my typical cruise scenario on my current world tour. It’s what I’m flying as I type.

My N1% is about 80 in this image and I always use live weather.

FYI, you don’t need to stay under the barberpole. The way Asobo has the speed implemented, the barberpole does not actually indicate the maximum safe speed. You can safely fly up to mach 0.84 at that altitude and you should not get the “Overspeed” warning.

That’s good to know. I just throttled-up a bit on my current flight. I just don’t like seeing all that red!

I can really use some help with an issue I have in the Cessna Citation Longitude.
I fly with the excellent mod v1.4 from @Dakfly0219 combined with G3000 and GX from Working Title. This is a great combination. When I go to Flight Plan menu in the Garmin for the first time, it may not give me the option to go Back or Home with the menu and I will have to reload the flight and try all over again.
It is documented in this short video (YouTube link)
Did anyone experience this issue as well? Am I doing something wrong?
Advises are highly appreciated.

Now that you mention it, I don’t use the Back button very much with that mod. I always push Home instead and I’ve never seen a problem like that. Do you get the same problem if there is no flight plan loaded? Like if you just start a flight with no flight plan?

Patch is up - V1.41 available at flightsim.to. This will permit continued use of the mod with Asobo’s newest software update.

Looks like fuel compacity has been fixed on the stock model, yay! Showing max fuel of 1080 gallons per side.

Does anyone know if it is safe to use the Working Title Gx000 mod on the Longitude after today’s (22 Dec) update?