Cannot locate the Cessna Longitude in the aircraft selection with the recent Xbox upgrade.

Go to world map.
On the upper-left click aircraft.
From drop down menu select jets. 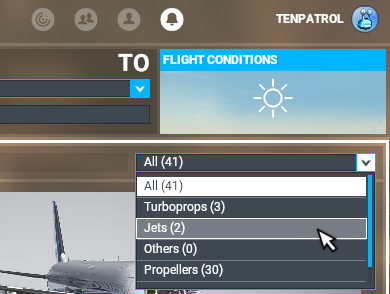 Cannot locate the Cessna Longitude in the aircraft selection

If you already own this but the aircraft has vanished you can check to see if it has been downloaded in content manager.

I have the most expensive deluxe version. I checked and the only thing I have for the Longitude are Liveries, which I suspect is the problem. May be I failed to delete my community folder before the last upgrade, but these Liveries are all Microsoft.

Root about in the “official” folder (I don’t know the default location of this, I’m on Steam and chose a custom install location)
You might find the aircraft’s folder. (Hide it, rename it whatever)
On sim restart it might prompt to download an update. This ought to be the plane.

Hello guys,
The cessna longitude is still a piece of s***…and the big cities too…when the Autopilot is on and follows the flight plan the aircraft is bouncing right to left…around 10 degre… And the taxi lights are not working.
New York and Los Angeles are broken…gave me a nice CTD…
In Los Angeles if you put the aircraft on the ramp and try to start the engine and after roll out you will get a CTD.
The asobo should work faster on these problems…
I paid for the biggest package…they gave us a half ready game.
Regards Zoltan

I located the solution by downloading additional content within MSFS 2020.