Change the name of the addon folder in the Community folder?

I would try it and see if it works. If it doesn’t, well you can always change it back.
The one problem I could see is that if that addon gets an update, it will probably look for the original folder to install it.

In my experience, generally yes - but not in every case. In particular, I have found problems with some Justflight aircraft add-ons (specifically the Arrow, Warrior and Hawk) where I changed the folder name to include the version numbers to help keep track of whch updates I’d downloaded. This worked fine and the plane loaded up OK, but something in the Justflight coding decided that, with a different folder name, my purchases were not properly licenced and the planes were inoperational. Change the name back and all was working again.

A much easier solution though is to use an add-on linker, such as 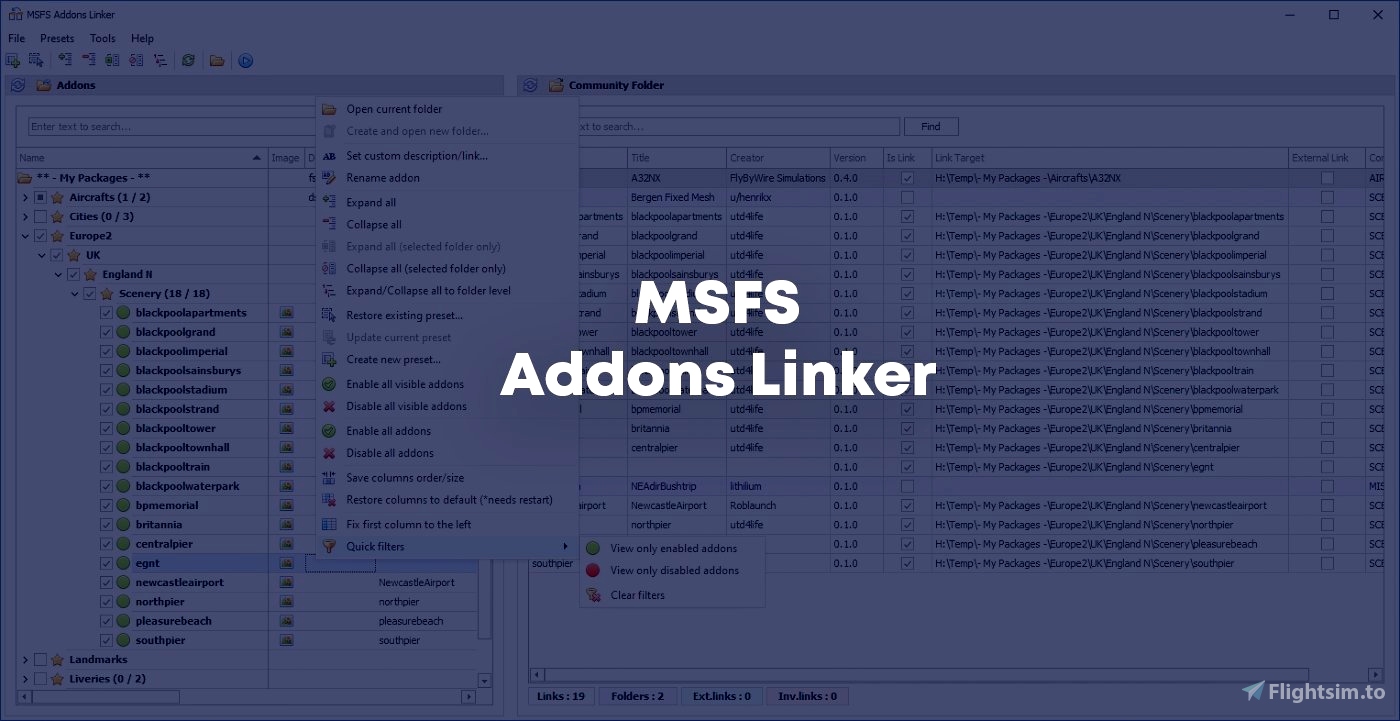 With this you can put your add-ons into folders wherever you like - call them anything, arrange them into groups how you like, by region, type etc and then just create a link from the actual folder into the community folder.

Yes, you can. In fact I have all of my airports in community folder only with the airport code: KLAX for example, or, in your example, I would have just OEJN. It works for me and it is very easy to find one. Of course, I’m also using MSFS Addons Linker.

Why don’t you just try it?

If something goes wrong, just rename it again.

I have prefixed all of my add ons in the community folder with 1 for aircraft; 2 for airports; 3 for scenery and so on. Been doing that for a long time now and never had a problem. I do also suffix them with version numbers without issue too. I don’t have too many add ons but am considering Addons Linker anyway, seems like a very good tool.

Thanks for the answers and advice. I have decided to use “MSFS Addons Linker”

Yes I’ve been doing this since I got the game. Makes it very easy to locate stuff. I only rename airports and liveries.

I also use the AOL, OP you will wonder how you managed without this excellent tool. You can now go to town organizing things neatly into folders.

I have several hundred addons and have renamed all of them with no issues. There are one or two payware aircraft that will not work if the folder is renamed but these are few and far between. As the OP says, you can always change it back if it doesn’t work but 99.9% of the time it will be fine.

I have decided to use “MSFS Addons Linker”

You won’t regret it: one of those simple little utilities that is inordinately practical/useful. A flight sim must have I think

For the JF addons that don’t like changed names, just drop a text file into the folder with version info - or check the manifest.json file.

As for the original question, I can tell you that none of the folders in my Community folder have their original names. Even my Orbx entries have been renamed. Each entry is prefixed by what it is in most cases.

Its creator needs recognition and an award of some sort!