Charts and Maps in VR

Whether VFR or IFR a Pilot needs all kind of charts for flying. Unfortunately, so far there is no native way to bring charts into VR. There are some 3rd party solutions but none of them works flawless for all headsets.

Is MS/ASOBO thinking about a solution for this?

In my opinion a simple solution would be a small webbrowser-window. So it would be possible to bring up skyvector.com or a lot of other charts as most of them could be found somewhere in the web.

This is an extremely important concept. We’ve been talking about it in other places, too:

We wish for the option to read external (PDF) aviation charts from within the VR cockpit environment: a movable and resizeable ‘browser window’ that can show (user-selected) external PDFs/etc. documents located from within a particular subfolder in the MFS directory; such as real-world sectional charts, instrument approach plates, etc. manually grabbed from the web. Chart reading forms an essential part of flight (training). This is especially true for hardcore simmers flying on online flight (…

Yes, please! Before VR I almost always used SkyVector or Google Maps during my flights.
Either let us use these in a window, or improve the existing map.

perhaps an ‘ipad’ on the dock station in the A320 that is interactive to a degree?

The nearest available at the moment appears to be the addon that presents LNM in an MSFS “popup”, just like the VFR map and the ATC window.

It works pretty good and can be used in either 2D or VR. I’m hopeful of a similar addon for Navigraph charts, but time will tell.

Does LNM have approach plates? Those are more important to me than maps.

For all Windows Mixed Reality User there is a quiet efficient way to integrate external applications (web-browser, acrobat reader,…) into the sim by using the “follow me” function of Mixed-Reality portal.

I have used that feature already some months ago an was not really convinced due to several drawbacks. But it seems as there have been some updates that maybe came along with Windows Update 20H2?

Anyway, just give it a try.

Unfortunately there are still some drawbacks: 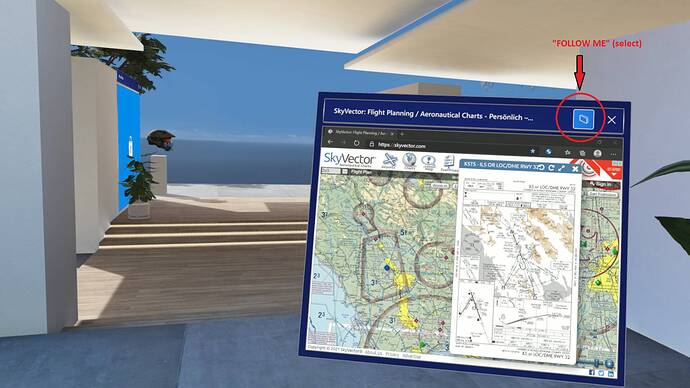 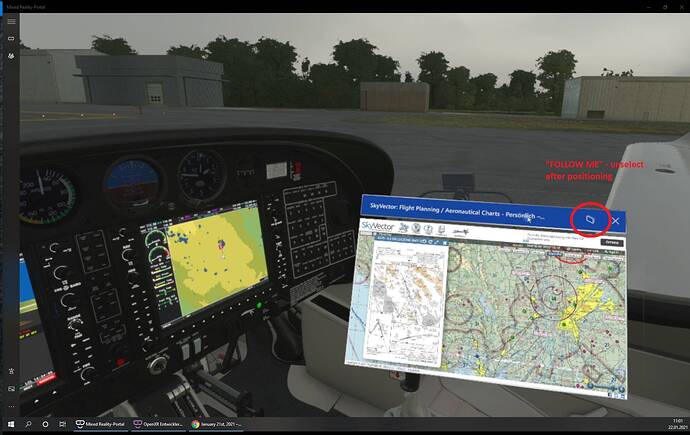 Additionally THIS AddOn gives you another possibility to integrate a website into your sim:
https://github.com/bymaximus/msfs2020-toolbar-window-template

You just have to download the module and put it into your community folder. Thereafter you have to edit the “CustomPanel.js” (can be found under: “…Community\maximus-ingamepanels-custom\html_ui\InGamePanels\CustomPanel).

Unfortunately skyvector.com is not working anymore as they disabled embedding their site through an iframe. But there are several other sources such as:

Using this method I’m unable to bring to VR SkyDemon and Pilot 2ATC. Both apps display kind of “startup” window before opening the main app window, this is probably the reason.

EDIT: I managed (Reverb G2) to have one classic app window in MSF2020: when startting the app in the WMR Portal (the “cliff house”) the “focus” must be in the headset (by Win-Y). Then the app for which “follow me” (icon in the upper-right corner of the app window) option was selected will appear in MFS2020. While VR controller are not normally visible in MFS2020, when the “follow me” app is visible in MFS2020, the controller becomes visible when pointed at the app window and can be used to fine tune app window positioning.
The mouse moves seamlesly betwen the cokckpit (MFS “3d mouse”) and the app. In the app the mouse is a bit erratic, however I don’t use the MFS 3d mouse, as I have all necessary switches and knobs bound to physical switches/buttons/encoders.
I tested it so far during 15 min. flight with SkyDemon and at some point it dissaperared (with some strange message from WMR about “slate” and “immersive application” if I remeber correctly),
I wil continue investigting with SkyDemon, Pilot2ATC and OneNote (as a kneeboard on which I can have images, pdf files and I can make some notes with my Wacon tablet laying on my lap).

It’s not as good as the options available under SteamVR, however for mee the native OpenXR drivers provide smoother FPS compared to Steam implementation of OpenXR.

EDIT 2: Unfortunattely, SkyDemon is being stopped after ca. 10 min. with the error message from WMR saying the “slate app” (SkyDemon) is not compatible with “immersive application” (MFS2020).