For me - the string of pearls rural night lighting everywhere where there shouldn’t be any is STILL my biggest peeve (especially since previous versions were way better and this actually got worse after patch 5 and STILL hasn’t been materially addressed yet in 1.11.6.0) - but now flying the Northeast Discovery Flight and now I’m 8 miles from Philadelphia in clear skies and still No Visible Skyline from 8 miles away??? Really??

Texture draw distance used to be WAY better in prior versions, and was frankly impressive. Now this. What Happened?!

This game is a triumph of technology and collaboration - but we were lured here to purchase a game platform with graphics and realism far better than what it is now - and the worse part is that it appears to be continually downgraded (perhaps for less powerful systems to run).

While I applaud that effort to help grow MSFS and its community and appeal, for the love of Pete please at least give those of us who made significant investments in hardware and software and premium versions of the game THE OPTION to select via sliders the intensity and density of night lighting - and the draw distance of buildings and other textures. The skylines of cities like NYC and Philadephia can be seen from the air at 50+ miles if not even further on a clear day or night - NOT FIVE. MSFS seems to draw mountains from a realistic distance - why not skylines?

And on the topic of red lights on top of buildings at night all over the place that don’t belong - even FSX got the correct locations of thousands of radio towers and navigational aids and their flashing beacons correct - in MSFS where are heck are they all?? Case in point Mount Beacon east of KSWF (which is one of our newly and beautifully enhanced airports in World Update 2) - the tower and flashing beacon on the top of that mountain - along with many thousands of others across the US - was always there. Where have they all gone??

It’s sad to see so many features lacking in this revolutionary platform - especially when it appears clear that it started off more impressive than it is now. It does so many millions of things right.

My asks are these:
—Draw cities at a realistic distance
—Incorporate correct bridge models (something else FSX seemed to do a much better job of vs MSFS 2020
—Please please please eliminate the horribly inaccurate “string of pearls” night lighting on rural roads.

Thank you for all you’re doing for this wonderful community!

Agreed… I just updated and been trying to figure out if it was my nVidia graphics and or latest drivers, but get the same issue. All terrain, trees, buildings, and 3D Objects get a very low polygon about 10-20 miles from view, and the transition is horribly noticeable, and sudden. NY City buildings are completely deformed; morphed into crazy alien like “spikes”. I run ULTRA, and tested High-End, and Medium with same texture deformity.

Some scenery looks like a weird Google like 3d objects and some trees are just weird low count polygons instead of trees or buildings.

I also noticed the beaches in FT Lauderdale, where trees or palms now turn into weird rectangles.

I am not sure what has happened since the release.

I run AMD Rayzen 3900 and nVidia 2080RTX TI with 32GM RAM and 2TB SSD latest gen. Cooling is optimal. Didn’t have an issue when launch, no stuttering, tearing, running all in ULTRA. Now the texture quality is becoming quite the annoyance.

It is happening around large cities more than rural. Not sure what to make of it. Attempted the older drivers from August and noticed slight improvement, but now I can’t run triple monitors for some reason.

I have opted to update nVidia drivers, but ended up going back to August game ready drivers.

Any help would be appreciated.

All Bing Map and Stream Data is On. I have Rolling CACHE 30GB and up.

Same here., at the distance I only see triangle and polygons of buildings, houses and trees. the rendering of them( rendering speed., or appearance of objects and their quality) improves if I am on top of them, that is to say very low height., at a very short distance

Voted. String of pearls is horrible like oversized Christmas decorations everywhere, but maybe that is what Asobo considers the announced Christmas surprise. Was much better before patch 6.

Completely agree with this. I can be parked at the gate at Dubai International and can only see some of the skyline. Seems mostly autogen buildings don’t seem to render in no matter how much I play with the graphics settings. Same goes for Toronto. Missing parts of the skyline from Buttonville airport just north of the city where you can see the whole skyline from in real life quite easily. Hong Kong–you can’t even see across into the heart of the city. Only a few custom objects render until you get quite close to the harbor. Departing Shanghai, it’s the same problem with a few sparse custom objects rendering, and none of the density that suggests you’re departing or arriving at a major urban hub of the world.

Asobo need to get the skylines rendering from appropriate distances like in FSX, X-Plane, and P3D did.

It has been terrible for me in cities since about 4 patches ago, maybe even after the first. Long time. 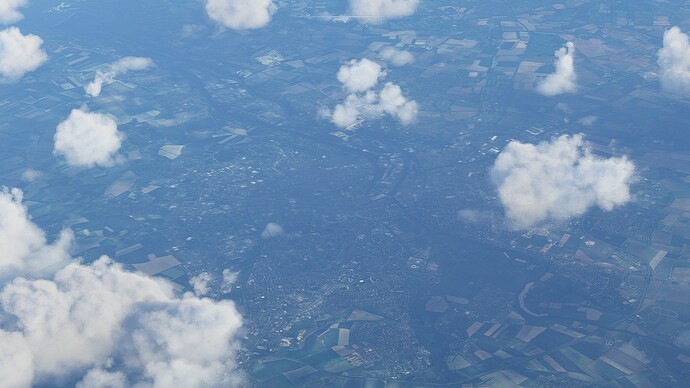