After a (too much?) long period without simulation I had a config set up by a friend about two months ago:

I am in Air cooling on a thermaltake v250 unit

So I installed MSFS and DCS on my SSD drive (C

DCS no worries, everything runs very well with all the sliders on the right.

On the other hand on MSFS, regularly, my machine turns off, purely and simply. Most often at the “ready to fly” moment just after loading, on a complex aircraft (Aerosoft CRJ or A320N FbW).

In a small plane can fly for hours over Los Angeles or SAN DIEGO or the Lyon scenery in photogrammetry (13 Go anyway) no worries, even if for Lyon it lags from time to time the time to load the textures. It crashes sometimes.

But for example I wanted to do a Nice-Nantes yesterday in 320 FbW, and I had to remove the free photogrammetry scene from the city of Nice so that it wouldn’t crash my computer. And when I say crash, I mean pure extinction.

I bought the Nice and Nantes airports among others, but with the 320 FlybyWire it crashes regularly.

For example, it was impossible to do a CdG-Bastia earlier with this plane. At each launch at CdG my machine crashed. CDG base airport.

I ended up doing a Nantes-Bastia, and my computer went out over Provence, when I was crossing Mont-Ventoux.

IN CRJ, my computer turned off once going downhill to Lyon from Biarritz. I told myself that the Lyon scene could have something to do with it.

I’m not on “Ultra” for the settings for information.

Have I been too greedy on the settings? in a small plane everything goes well, it is in the liner that it is more complicated …
For the rest (AI traffic (air / land / sea) I am 100%. I have Global ship AI.

I did a stress test wit OCCT to see if my computer shut down but it passes all test with success, staying alive.
First test was CPU
Second test was GPU 3D
Last one was Power test to check power supply
I uploaded a log that i recordered with GPU-Z with all parameters for shutdow and test in wetransfer if you need it.

Just a screenshot from OCCT during power test 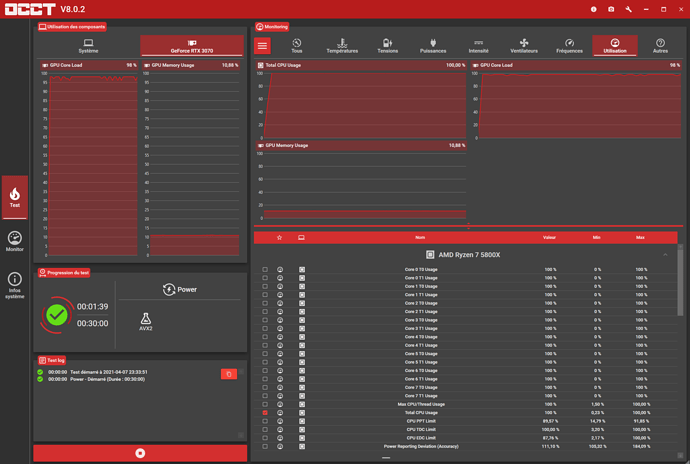 If someone had a trick to detect where the crash and the shutdown of the computer comes from (I am thinking of an automatic security setting at the temperature of the proc, but impossible to be sure since it crashes before I could see said temperature).

drivers up to date ?

… this is why this tools often say nothing… test step by step and never all together in 100% system load.

Reboot:
if a normal reboot, there is often an entry in windows event log

Nothing overclocked, drivers ok and last test was all componant use to see if power suplly could resist…

) the both possible main things to check.

And don’t forget to check without HAGS, in case is on.

EDIT: seen also your memory configuration… MSFS is a bit sensitive in relation to memory. may be…

EDIT: seen also your memory configuration… MSFS is a bit sensitive in relation to memory. may be…

That caught my eye too, @Clopino9555 I would test it by first removing the 2x8 RAM sticks and see what it does.

Sorry but what is HAGS?
I have 48Gb RAM… you think That’s not enough?

I will try this so. Thank you for the hint

48 is fine and better as 32 , but different kind of memory sticks can cause issues and msfs find all of these in 100%

HAGS is the new Windows Hardware Accelerated Scheduler which can be enabled in Graphics menu. From positive effect till killing PC , this feature offers all

think is one is the docu (https://download.gigabyte.com/FileList/Manual/mb_manual_x570-gaming-x_e_v1.pdf)… if so then it’s like in other mainboards too :

Good morning. I am really surprised that the Nice scenery leads to your machine extinction. There is no reason about that. The only reason i can see is the number of drawcalls that your computer could not handle correctly. Maybe did you overclocked the CPU ? Your system has enough memory resources to handle such sceneries.

Have you removed your rolling cache to avoid conflicts with the last updates ? Also, what are your LOD settings in the graphics menu ?

2 areas of concern for you to explore:
-Your psu is at the minimum required for your gpu and your driving at 34" uwhd monitor.
Your gpu is working very hard and demanding a lot of power.

-Your ram is mixed. There very well might be issues with the mixed sets.

I don’t know, but I have a Dejavu… OP needs new hints and not hints which repeating the already given hints…

650W really enough for this rig?

It does sound symptomatic of an overloaded PSU, or a failing one.

Thank you all guys!

I’m a bit busy right know but for sure i will try all the things you told me.

For info @thalixte i’m most in a mix between ultra and high. 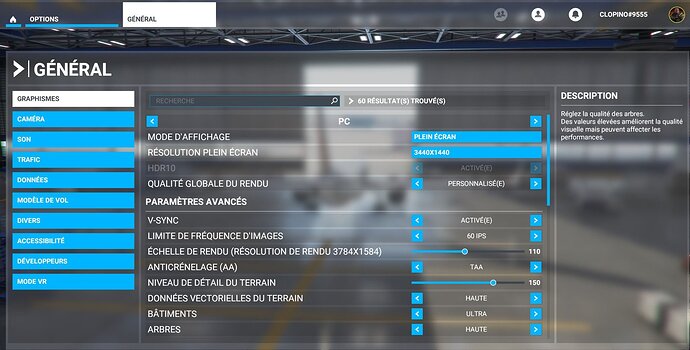 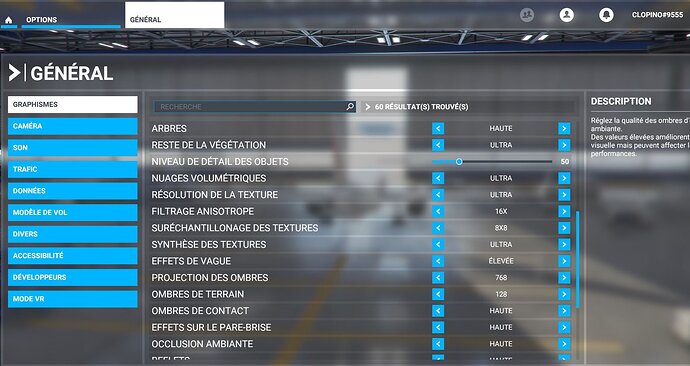 You don’t have to be sorry, as i am french too

You seem to use a big resolution, so maybe there is an impact. have you tried monitoring your RAM and VRAM usage ?

I have been building and repairing computers for almost 25 years now. The computer shutting down completely is a symptom of a PSU that is either failing or not powerful enough for the demands of the system. Replace the PSU with a more powerful name brand PSU. Good luck.

Normally as I understood it should be but…
It’s the same for the RAM no? should be enough? Yes I monitored it but I see something like 28 Gb before shutting down